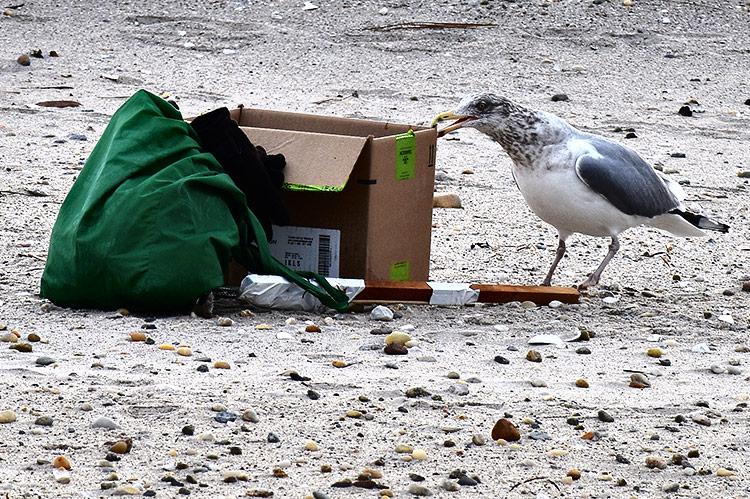 Gulls, like this one patrolling Havens Beach in Sag Harbor, like to play boss.
Jean Held
By Larry Penny

Once I wrote about gulls and the editor at the time used the word “arriviste” to describe them. It was the first and only time I had come across that adjective. I just looked it up again and the editor was spot on, gulls fit the word perfectly. But at the same time they are much more than just greedy and self-serving. Just as the Norway rat may be the most adept of all the mammals, gulls — in particular, the herring gull — may be the most adept of all the birds.

If they were humans, you might throw them into the lot of the arriviste Lauers, Epsteins, and Weinsteins. However, herring gulls are not at all into sex, except when it comes time to procreate the species. For that they get together in large numbers, lay eggs, guard them, then raise the hatchlings until they fledge. Just as we have friends whom we grew up with into old age, gulls may behave similarly. Outside of reproduction, they are into getting the best of every situation. And they can be quite pompous, strutting around like they own the place, and in a way — like the Norway rats — they do.

They are certainly arrogant if given the chance. As fliers, they are as expert as eagles, falcons, and other predatory birds. I look out the window and see the gulls go back and forth, up and down, hour after hour over Noyac Bay and along its shore without so much as a wing beat. They are as expert at gliding as vultures.

They keep track of the local tides. While Noyac Bay is receding on a late afternoon when it’s still light out, they fly toward it making a racket from the southwest. I presume they are returning from Shinnecock Bay and the Atlantic Ocean, where the high tides come earlier.

In the summer on Long Beach at the edge of Noyac, they strut back and forth amongst the bathers seeking handouts, checking out this and that, patiently eyeing the goings-on, not missing a trick.

During the day, if you’ve ever had the pleasure of dining outside at Gosman’s on the west side of Lake Montauk, you most likely have been joined by gulls patiently eyeing you and your food while sitting on the rail only a foot or so away.

In some areas, as on the west side of Noyac Bay near its mouth, the herring gulls, both young and old, occupy the hard surfaces of the roads and barely move out of the way as you pass in your vehicle, eyeing you as you do, with a “don’t mess with me look” and you begin to realize that they are part owners of the thoroughfare. You use it for getting around, they use it

for cracking open mussels, clams, and conchs. The pavement is their dinner table.

Go to Havens Beach on Northwest Bay in Sag Harbor on a pleasant day and you will invariably see a couple of adult herring gulls occupying the tops of utility poles, standing absolutely still, staring in a northerly direction toward North Haven and Shelter Island. On a windy rainy day as we experienced on Friday, however, the gulls aren’t on poles but on the ground, both young and adult in a mixed flock facing in the same direction, into the wind. Stop the car to get a better look and they rise a few feet off the turf, all maintaining the same orientation, then settle back down to their original positions.

Gulls have marvelous vision. They almost never see you head-on, but with one side of the head. Don’t you know, while they’re studying you to the left, they’re watching the goings-on on the right in the same attentive way. They can pretty much see what’s happening a full 360 degrees around them simultaneously.

Herring gulls are great scavengers, in the way that crows, ravens, and vultures are. They surveil the local roads the way crows do looking for roadkill to feed on. They are wary as crows and almost never get run over. They patiently stand by on the shoulder like traffic cops at school crossings until all of the vehicles have passed safely by before taking a bite or two. In 50 years of keeping track of roadkills, I have counted fewer than 10 gulls, all told.

Gulls are expert floaters, they sit atop the coldest of waters looking for something to eat. They don’t dive like ospreys or gannets, but catch mussels and clams by dunking down the way swans do for aquatic plants. Scavenging along the shore for marine life deposited by the tides and waves is their favorite way of surviving. When scallops occasionally wash ashore, the gulls invariably find them before humans do.

One often observes flocks of gulls in grassy fields a long way from water. They are omnivorous, and if it’s insects or even seeds they are after, fields, especially farm fields, are as good a place as any to find them. They even eat rodents such as mice when available. In the bird world there is no species that is as omnivorous as the gull. Wasn’t it gulls who saved the Mormon settlers in 1848 when locusts threatened to eat all of their crops?

Parrots can live to be almost 100 years old. They beat gulls by scores when it comes to life span. Gulls can live 12 or more years before perishing from old age, but in a way, that only makes room for more gulls. They are always looking out for each other and their species in one way or another.

In conclusion, if given the opportunity, I’d rather come back as a gull than a Norway rat. Just think, I could see the world without having to get a passport or visa, go anywhere, live anywhere, then — fully sated and satisfied — kick off and get recycled into more gulls!