Pressures are great, but ‘there are amazing universities’ within reach for many 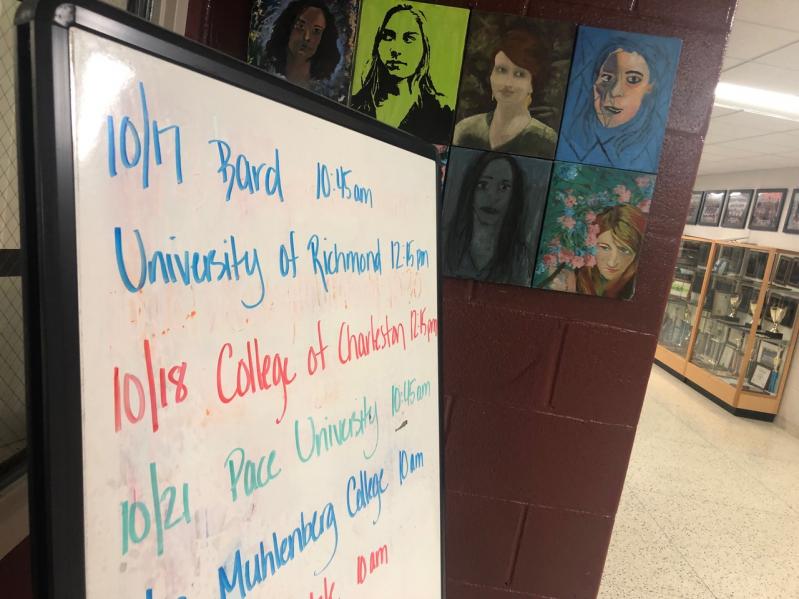 Between filling out applications, answering multiple essay questions, building their résumés, taking tests, and just being normal kids, college application season is tough for many.

“It’s really stressful,” said Jennifer Calle, an East Hampton High School senior and varsity soccer player, “because you have college deadlines plus schoolwork, clubs, and sports to fit in. The deadlines are coming up so quickly that the things you have to worry about are constant.”

Whereas past generations of college students might have applied to just a few schools, many students these days — hoping to achieve acceptance into the top institutions — are applying to 10, 12, and even, in Wells Woolcott’s case, 15 schools.

“M.I.T. has 4-percent acceptance rate,” said Wells, an East Hampton High School senior who wants to study architecture. “It’s something that’s on my mind, but I’m bound to get into one of them. I feel like wherever I end up, I’ll find my place there and be happy.”

Jennifer said she is applying to eight schools, and said she was told by counselors at East Hampton to apply to at least six. “You have two safety schools, two reach schools, and two that fit you about right,” she said.

“We meet with every single senior to talk about what their plan is,” she said. “We also do senior seminars where we push in to the English classes and touch base with all of them to say this is what you should be doing now. After we start sending in applications, if there are students who haven’t done any, we’ll call them into our office individually. We say, ‘What’s your plan? Do you have a plan? Do you need help? Do you need help looking for a job?’ We see how we can help.”

Brandon Vazquez, another East Hampton senior, said the guidance counselors at the school are extremely helpful. He hopes to go away to college, is planning to study math, and is applying to seven or eight schools.

“I still feel like I’m really behind on things,” he said. “To be honest, I wish I got ahead on some of it.”

Increasingly aware of the pressures of college admissions, the looming possibility of student loans, and building their résumés with extracurricular activities, many students are also seeking help outside of school in the form of private SAT tutors and coaches. Ms. Brown estimates that about 25 percent of East Hampton’s senior class this year took lessons with private coaches.

Pros like Anabel Graff, a college essay coach in New York City and Sag Harbor who goes by @creativeconnectionsessays on Instagram, help fill in gaps that students may not even realize exist.

“The kind of essay that the application asks you to write is not often, not always, taught in high school,” Ms. Graff said in an interview. “So it’s kind of counterintuitive to expect a teenager to write a type of essay that they’ve never written before for the most important piece of writing they’ll have to write.”

Yanni Bitis, a Pierson High School senior, took the SAT three times and saw his score improve after working with a private tutor.

“My life revolves around college applications,” he said. The rest of his fellow seniors “are pretty much doing the same. We’re all focusing hard on SATs, ACTs, and getting very competitive in school grade-wise. A lot of extracurricular stuff is going on. It’s a very competitive atmosphere, but we’re also all going through it together and so we talk to each other and help each other get through it.”

The recent college admissions scandal, in which parents’ money, influence, and even fame often played a role, may have painted a picture that colleges are tough to get into. But the publication Inside Higher Ed reported in April that “highly competitive colleges do not represent most colleges.” The majority of four-year institutions, Scott Jaschik wrote, admit most of the students who apply.

“This frustrates many involved in college admissions, who fear that these stories scare would-be students,” Mr. Jaschik wrote. “And many articles about the admissions scandal have suggested that fear of rejection was a motivation of some of the parents involved.”

Yanni, who takes all honors classes and has 14 schools on his list of applications, is concerned he won’t get into his top school. “I’m not worried about my future in general, just because I know whatever happens I’m going to get into a school, and I will have that down and be secure,” he said.

Financial aid is also a mountain for many to climb. About 50 students and parents attended a financial aid information session on Tuesday in East Hampton offered by a St. Joseph’s College expert.

“That’s something that’s weighing on me pretty heavily. It was a stressful hour to sit and take on the reality of it,” Wells said.

Ms. Brown said most kids have only heard of a few colleges — big names, Ivy Leagues — when they first enter high school.

“The thing is, there are over 4,000 schools, so there are many options,” she said. “Hopefully we’re helping them open up to other options. There are amazing, amazing universities all over the country that have just as good programs as some of the ones they’re thinking about.”

Ms. Graff said college admissions may even be the first time students experience rejection. “We’re all told if you work really hard you’ll get what you want,” she said. “This is the first time that that might not be true. The entire process is so stressful and nothing about it is built to reduce stress.”

But Samantha Totten, an East Hampton High School senior, isn’t worried at all. She said getting started on essays and applications over the summer, as well as identifying early on the possible colleges to apply to, have made application season a breeze — even though she will be applying to 13 schools.

“I’ve been staying ahead, so I’m not really stressed out,” she said. “I can’t speak for all of the kids in my grade but I’ve had a fairly easy process so far.”

Along with the myth that school acceptances are hard to come by, Ms. Brown dispelled another big one.

Nov. 1 through Nov. 15 — Early action and early decision. Students applying this way will often hear back from schools in December. Jan. 1 through Jan. 15 — Most other colleges and universities have general application deadlines during this time period.