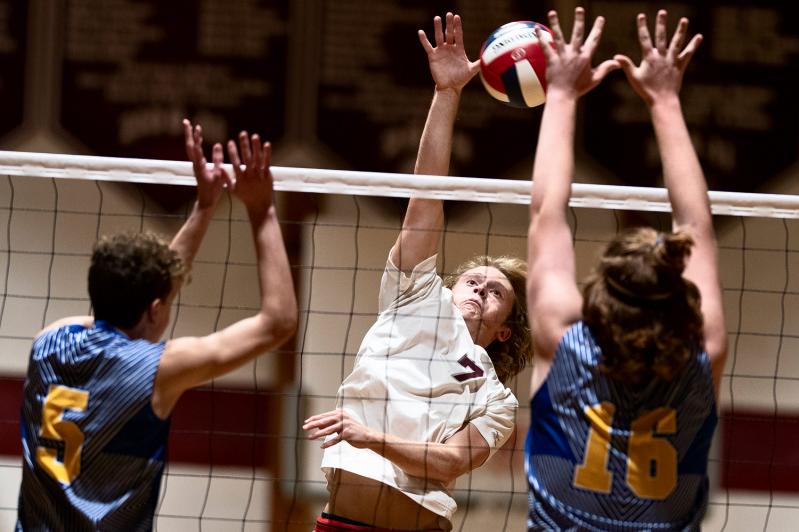 Off to a slow start, East Hampton High’s boys volleyball team picked it up as last Thursday’s match here with West Islip progressed, winning 3-1 in the end.
Craig Macnaughton
By Jack Graves

East Hampton High’s boys and girls soccer teams and its boys and girls volleyball teams had wins this past week, while the girls swimming team lost 93-82 Sayville-Bayport, the defending league champion, 13 of whose points were awarded for diving.

“We’re still in the [playoff] hunt,” Don McGovern, the boys soccer coach, said after Saturday morning’s 2-0 win here over West Babylon, a game in which it seemed there were 20 “offsides” calls made against the home team’s strikers, who were, as that fact indicated, more aggressive throughout the game than West Babylon’s.

The Bonackers’ goals were scored in the first half, the first by Robert Rea, on a header 15 minutes into the fray, and the other, four minutes later, by Christopher Pintado that capped a three-on-one breakaway.

It was the second win in a row for McGovern’s charges, who had shut out Rocky Point 3-0 last Thursday.

“We’ve got to win 4 points in our final four games to make the playoffs,” McGovern said. “You get 2 for a win and 1 for a tie.”

While the girls soccer team has a ways to go to match the boys, it improved its record to 4-8 by virtue of a 1-0 win over Smithtown Christian here last Thursday, in the rain, wind, and — certainly insofar as the second half was concerned — in the dark.

“Our bench blew completely over at one point,” Cara Nelson, the team’s coach, said during practice the next day. “They had the wind in the first half, we had it in the second. Claire McGovern got our goal, with Alden [Powers] assisting two minutes into the second half. We had a number of opportunities after that, but Claire’s goal was the one that mattered.”

“We’re playing well,” Nelson continued, “getting the ball out wide and then playing it into the middle. They’re doing what we’ve been teaching them — they’ve made a lot of progress.”

As evidence, she cited some close scores with Islip, Eastport-South Manor, and John Glenn, teams that would have routed the Bonackers in the past. By the same token, she said, East Hampton had defeated Port Jefferson 5-1 and Hampton Bays 7-0 recently. “We’re improving every day — they show up, they work hard, and it’s been showing on the field. We’re making strides.”

“We still have work to do when it comes to retaining our momentum, but we’re headed in the right direction,” Josh Brussell, the boys coach, said in an email. “Our win brought us back up to sixth in the county and to first among its small schools.”

Luc Campbell led in kills, with 17, followed by Logan Gurney, with 14, and Clark Miller, with 13. “They were putting up double and triple blocks on Clark initially, and we were having trouble getting started as a team, but our confidence grew as the game went on.” Travis Wallace, who subbed for Henry Garneau, “did great in his first start, and definitely will get more minutes should Henry ever struggle in the front row.”

Morgan Segelken, the setter, had 52 assists, and Tucker Genovesi, the libero, who was missed in a recent loss to Ward Melville, had 23 digs.

As aforesaid, the girls swimming team, coached by Craig Brierley, lost at Sayville-Bayport, by a score of 93-82. The home team won most of the events, with East Hampton picking up points as the second, third, and fourth-place finishers.

East Hampton’s winners were Sophia Swanson (recently returned from the international lifesaving tournament in Cape Town, South Africa), in the 100 freestyle, the 200 free relay team of Jane Brierley, Kiara Bailey-Williams, Julia Brierley, and Swanson, and the 400

Reghan Anderson, who competed in the medley relay, the 100 free, and in the 400 free relay, was named by the captains as swimmer of the meet.

The loss dropped East Hampton to 3-1 in league competition, and improved Sayville-Bayport to 4-0.