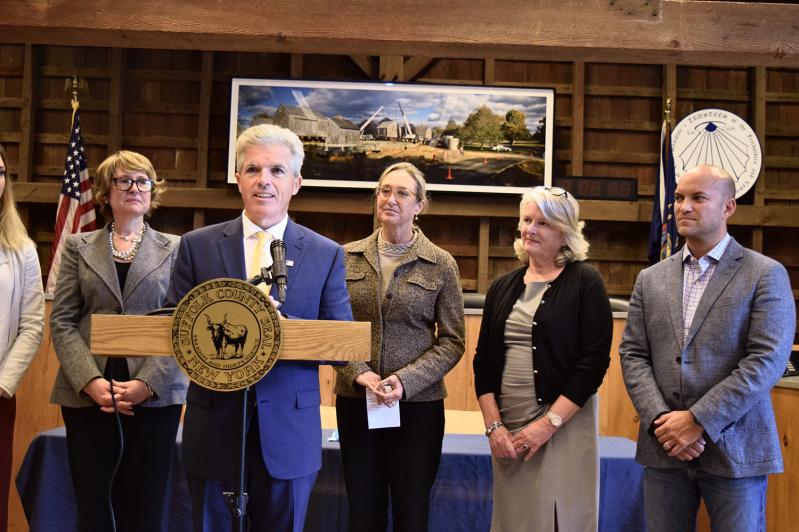 Asserting that Suffolk County should be known nationwide as a cyclist and pedestrian-friendly place, County Executive Steve Bellone signed legislation at East Hampton Town Hall on Friday awarding a $400,000 grant to the town toward creation of a multiuse path extending from the Long Island Rail Road station on Flamingo Avenue in Montauk to the hamlet’s downtown.

The path along Flamingo Avenue and Edgemere Street has yet to be designed but is envisioned as a means of connecting the two points in order to promote alternative modes of transportation, such as cycling and walking, as well as to enhance the South Fork Commuter Connection, the additional train service launched in March, by allowing commuters to safely bike or walk from the train station to their destination. It is to be contained entirely within the road right of way, and will be designed to avoid impacts to wetlands adjacent to Fort Pond, according to a statement issued by the town on Friday.

A connection between the two points is among the goals outlined in the draft Montauk hamlet study. It is hoped that the 5,000-linear-foot multiuse path will encourage train travel to Montauk and a consequent reduction in vehicular traffic, particularly during the summer season.

The project is one of eight funded by the Legislature’s recent vote to award $5 million for revitalization and renovation projects through Jumpstart Suffolk, a program sponsored by the county’s Department of Economic Development and Planning. The program is designed to fund infrastructure projects to facilitate the development of mixed-use, transit-oriented downtowns.

From the county’s perspective, Mr. Bellone said, “we should be supporting the efforts that are happening in local communities, the important work that is happening there that not only is strengthening and benefiting the local community, but also has benefits to the region as a whole.”

Montauk, said the county executive, “is a very important place, an iconic place in the community, and we want to do everything we can . . . to be promoting alternative modes of transportation.” That involves infrastructure, he said. “That means making investments, capital improvements, and that’s what we’re doing here today.”

Mr. Bellone said that train service is important, and acknowledged the South Fork Commuter Connection, which grew in popularity after an initially tepid response from commuters. “What we’re doing in the county is continuing to push to drive infrastructure farther east.” Such initiatives “create the conditions on the ground that will encourage further investments from the state, from the [Metropolitan Transportation Authority], that are needed and deserved here on the East End. Anything we can do to enhance and encourage people to take train service, by providing additional transportation options once they arrive there, that’s a positive thing.”

Legislator Bridget Fleming also attended the signing. Noting that county officials were late in arriving in East Hampton owing to their earlier inspection of the Shinnecock Inlet in Hampton Bays, “where we were this close to a full breach” during last week’s northeaster, she linked the Montauk project to efforts to reduce fossil-fuel emissions. “We have to be mindful of climate change,” she said. “Any effort, such as this, that is going to get people out of their cars is an effort that’s going to mean not only a lot for the Town of East Hampton and the hamlet of Montauk but for the region as a whole and, really, for the globe.”

The multiuse path represents “more help for the ‘last mile,’ ” the final distance L.I.R.R. commuters must transit to reach their destination, “so folks can get off the train and on their bikes . . . instead of getting into a car or a rideshare or another fossil fuel-combusting way of transportation.”

“This one is really near and dear to my heart,” said Councilwoman Sylvia Overby, the board’s liaison to Montauk. “This is something that Montauk has wanted for quite some time. They need that connectivity between the train station and the downtown area. This certainly is going to go a long way in helping us get that project completed.”