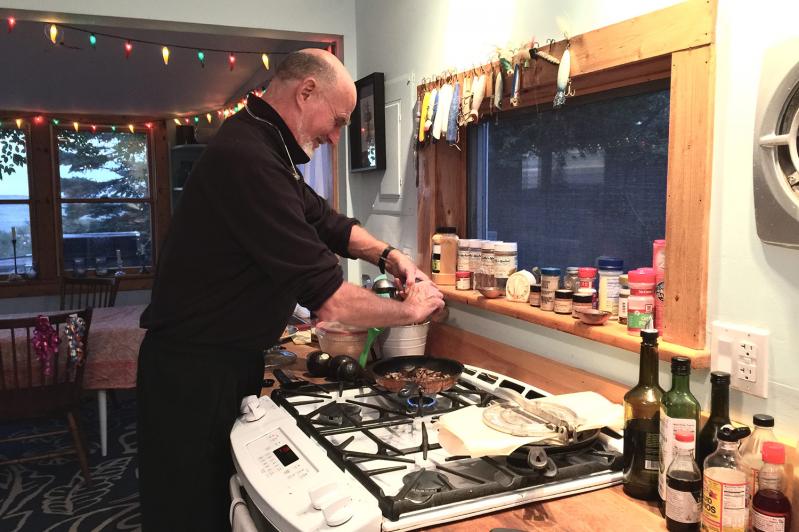 Charlie Whitmore cooked mushrooms at the stove as a filling for his homemade tortillas on a recent Taco Tuesday.
Laura Donnelly
By Laura Donnelly

Every time I walk down Shore Road at Lazy Point in Amagansett I contemplate the various shapes and sizes of the shacks, camps, and houses. There are only a handful that look truly naturalistic in this setting, and one in particular has always caught my eye. It is slightly hidden behind some pine trees, a hammock is visible up on the porch, and twinkly lights are strung around the front. A little hand-painted ceramic sign by the door says, “Oh, no, not you again.” The owners do not mean it, for this is the house of the Whitmores — Chini and Charlie to be exact — and it is welcoming and casual.

Charlie Whitmore, son of Eleanor and Doc, owner of Charlie and Sons Landscapes, has been a vegan for 30 years. After a surfing trip to Mexico about eight years ago, he returned with a desire to learn how to make his own tortillas for their family Taco Tuesday nights. I was invited to one of these Taco Tuesdays a few months ago and was astounded by the deliciousness of everything, especially the homemade tortillas. There were kids and friends and dogs wandering in and out, their matriarch, Eleanor, gracefully sipping champagne, Chini setting the table to magically fit 12, and Charlie cranking out the tortillas. It is literally a two-day process to make this feast.

I asked if I could come back again and write a story about their family’s Taco Tuesday, get some recipes, and pitch in. The day I went, Chini was in Italy so I really was put to work. Upon arrival, Charlie first took me out the back door to introduce me to a gray tree frog that has been residing above the sliding glass door in a tangle of Virginia creeper. He used to live in the outdoor shower. He will freeze in the winter and come back to life in the spring.

Mr. Whitmore began his tortilla education by watching videos on the internet and making tortillas with store-bought maseca, the mass-produced instant corn flour widely available at Latin markets. He laughs at the memory of friends and family “eating a lot of cardboard.”

“Out here you’re in a vacuum, you can’t go ask a neighbor, you have to learn on your own by experience.” He has reached the point where he now buys organic blue corn from Oaxaca, and nixtamalizes it the day before. This is the process of mixing dried kernels with calcium hydroxide or slaked lime. From there the nixtamal can be ground to make dough or used whole. The nixtamalization allows the niacin to be absorbed, makes dough-making easier, and also helps eliminate potential mycotoxins, molds that may have infected the maize.

There were shiitakes on the stove (“for Durell”) and cubed marinated spicy tofu in the oven. The mashed refried beans were finished, as were the mango salsa and pico de gallo. Some very, very ripe plantains were split lengthwise, waiting to be put on the grill outside. Some mashed sweet potatoes, seasoned with coconut milk and maple syrup, were on the counter, and a purple cabbage slaw was ready to be blended with a spicy, salty green dressing. Two comals were heating up on the stove and Charlie began the production, forming dough balls about the size of an Italian prune plum, flattening them in a press (tortilladora) before frying and stacking them in the tortilleros, pretty woven round baskets.

I set the table and tackled the guacamole as we chatted. “My kids were raised vegetarian but they eat meat, they eat everything! It can be a challenge, the food has to be really good when they come over!”

As a child, Charlie loved hiking every day with his father, mountain biking in the woods, and surfing. He still does all of these things with his children.

I finished the guacamole as his son Mattias wandered in, followed by Chico, who has been surfing in the northeaster. I am no slouch in the guacamole department, so I proudly presented it to the boys for a taste.

The plantains, cooked halved with skin left on, had charred beautifully on the grill. There was an old bottle of Johnnie Walker Black on the counter, so Charlie basted the plantains with it, then sprinkled cinnamon on them. Whah? “Nobody drinks this stuff, someone left this bottle here, so I thought it might be good on the plantains.” He shrugged. It is delicious, the alcohol evaporating, leaving another layer of smokiness and warmth from the scotch, the grill, and the cinnamon.

A friend named Joanne arrived. She has just returned from living in Greece for a year and is about to begin a job in the big city. Durell arrived with Eleanor Whitmore and a bottle of Veuve Cliquot, her generous weekly contribution. Eleanor, who is in her 90s, is chic and pretty and fun, wearing a hot pink cable-knit cashmere sweater and sipping from a delicate champagne flute.

Chico completed the table setting with wide glasses stuffed with lettuce leaves (“keeps the filling from making the tortillas soggy”), and adding what they call “Peruvian toothpaste,” a plastic bag with a squeeze tube top filled with crema de aji, yellow hot chile sauce. Chini is from Peru. This sauce is so good on everything. I just bought four bags of it.

The table became quiet as everyone focused on constructing their own tacos. Chico helpfully instructed me that it is very important to not overload your tortilla. If you do, it’s just a wet mess. Right, like pizza toppings, I think to myself. Then I looked at his taco, which virtually looked like I.M. Pei’s pyramid at the Louvre, piled quite high, but artfully. Joanne was in a reverie. She finally spoke. “This is beautiful. There is nothing better than tacos at Lazy Point.” We all concurred.

As satiation set in, Charlie’s sons got up to clean up and Charlie collapsed on a comfy chair. “This is a lot of work. The food takes two days. But it is important to get the family together and some friends, once a week. We talk, we chat, it’s just an opportunity to be together.”

Maybe someday I will learn how to make tortillas and hopefully it won’t take eight years of trial and error and cardboard. In the meantime, I am grateful to have met the Whitmores and had the opportunity to dine at their cozy table and enjoy the best vegan tacos ever.

Mashashimuet Park's History and Future
A Conference for Young People to Create Solutions
Get Outside, Get Moving
END_OF_DOCUMENT_TOKEN_TO_BE_REPLACED