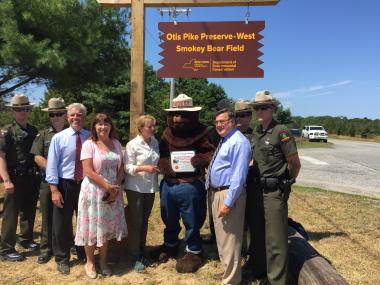 Forest rangers with the New York State Department of Environmental Conservation are searching for the person responsible for the destruction and theft of a sign at the Otis Pike Preserve West in Manorville.

According to a D.E.C. announcement, the sign had only just been installed in August to commemorate the 75th anniversary of Smokey Bear as a national symbol of forest fire prevention. Photos released by the D.E.C. show the sign post broken and the sign itself missing. The agency believes the damage and theft occurred sometime between Monday, Oct. 7, and Friday.

The sign stood at the corner of Line Road and Grumman Road in Manorville. The 20-acre grassy woodland beyond the intersection, which had been dubbed "Smokey Bear Field," is often used by forest rangers and volunteers for education about preventing and containing wildfires, the D.E.C. said.

Anyone wishing to share information about the sign incident can call the D.E.C.'s Office of Public Protection at 518-408-5858.