But a ‘perennial winner’ takes three first prizes with entries from the waters of Lake Montauk, Accabonac Harbor, and Three Mile Harbor 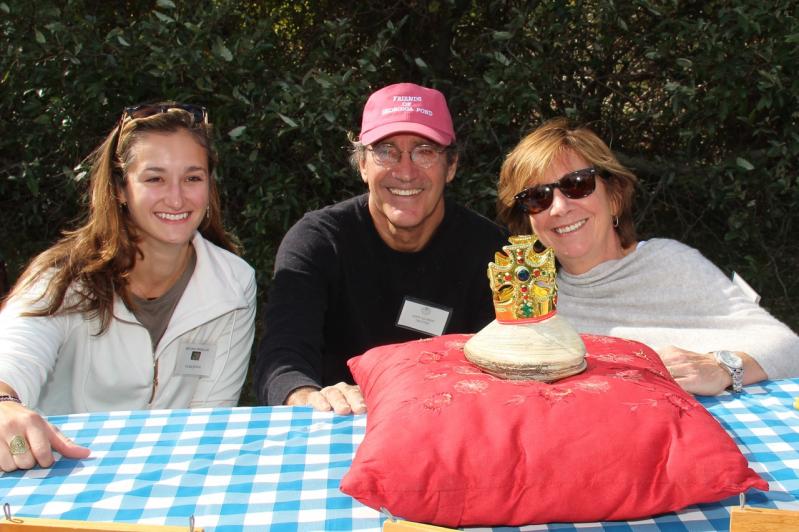 The season’s first northeaster had come and gone by Sunday, and a perfect early autumn day greeted the crowd gathered on the grounds of the Lamb Building in Amagansett for the East Hampton Town Trustees’ 29th annual Largest Clam Contest.

Clamming in the days preceding the contest was hampered, however, by the stormy weather, as wind gusts of up to 50 miles per hour were measured on the East End. Consequently, the contest saw fewer entrants than usual, and none at all in the junior division. But those gathered eagerly enjoyed a hearty Manhattan clam chowder and clams on the half shell, both provided by Stuart’s Seafood Market in Amagansett.

A clam chowder contest was decided by the judges Charlotte Sasso, an owner of Stuart’s; her son, Dante Sasso; the chef Bryan Futerman, Zachary Cohen of Springs, and this reporter. The East End Classic Boat Society sold raffle tickets for the Catspaw dinghy its members built this year, its winner to be announced at the society’s holiday party and open house in December. The trustees sold T-shirts, aprons, and other apparel depicting a “balloon fish,” created by Susan McGraw Keber, a trustee, to raise awareness of pollution on beaches and in waters (the Suffolk County Legislature recently voted to ban the intentional release of balloons, thanks in part to Ms. McGraw Keber’s efforts). And a group led by Steven Tekulsky and Job Potter provided music.

Hard clams harvested from Lake Montauk, Napeague Harbor, Accabonac Harbor, and Three Mile Harbor were eligible for the competition. Entrants were asked to take their clam contestants to Stuart’s, Gosman’s Fish Market in Montauk, the Amagansett Seafood Store, or the Seafood Shop in Wainscott through Saturday in order to be considered in Sunday’s competition.

When the largest clam from each harbor had been announced, Clint Bennett, a perennial victor in the annual competition, was a three-time winner. His 1.7-pound clam dug from Lake Montauk, 1.5-pound specimen from Accabonac Harbor, and 1.1-pound clam harvested from Three Mile Harbor were the top entry from each water body. But it was Don Fromm’s 2.6-pound monster harvested from Napeague Harbor that took the honors both for that harbor and for the largest clam overall.

In the clam chowder competition, the panel of judges agreed that Paul Roman’s smooth New England concoction was the best of five competitors. The potage, Ms. Sasso observed, “embodied all the traditional elements of a fine New England-style soup. It had a great depth of flavor and a silky smooth texture.” With no junior competitors, a raffle allotted awaiting prizes to youngsters gathered at the makeshift stage, where trustees including Ms. McGraw Keber, Francis Bock, and John Aldred announced the winners.

The Trustees of the Freeholders and Commonalty of the Town of East Hampton, created and granted sole authority over the town by King James II through the Dongan Patent of 1686, manage the town’s common waters and beaches, and some woodland roads, on the public’s behalf.