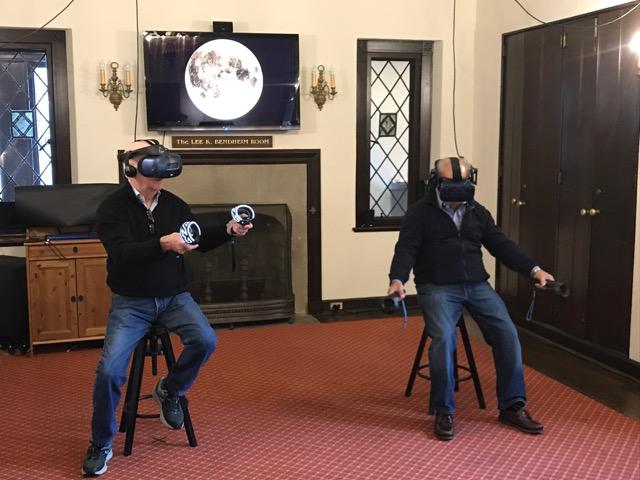 After having dipped its toes into virtual reality last year with “The Hidden,” which put the viewer in the middle of an ICE raid, the Hamptons International Film Festival is doubling down on immersive storytelling this year with two dramatically different approaches to the medium, each of which involves travel.

“To the Moon,” by Laurie Anderson and Hsin-Chien Huang, transports the viewer on a debris-filled space voyage to the moon. Like the artists’ previous work in VR, it is a dazzling experience full of visual pyrotechnics and haptic feedback that is probably as close to space travel and walking on the moon as any of us will come. It draws images and tropes from Greek mythology, literature, science, science-fiction films, and, briefly, politics.

Roger Ross Williams and Ayesha Nadarajah’s “Traveling While Black” takes its cue from the “Green Book,” which most moviegoers now know was a guide for African-Americans traveling through the South during the Jim Crow era. The locus of this work’s journey is Ben’s Chili Bowl, a Washington, D.C., restaurant that has long been a gathering place for that city’s black community.

Several people talk about their experiences of racial prejudice and conclude that while the "Green Book" is no longer necessary, traveling while black—indeed living as an African-American in this country—can still be a dangerous business.

While in “To the Moon” one is surrounded by a vividly imagined astral realm; in “Traveling While Black” the medium puts the viewer so vividly into the restaurant—at a table with other customers, listening to their stories—that one is tempted to reach for a salt shaker or give the person next to you more room. The sense of being virtually in the middle of the community is as engrossing as the film’s message is sobering.

Both programs can be seen for free on a first-come-first-served basis at the East Hampton Library from 11 a.m. to 4 p.m. on Saturday and from 1 to 5 p.m. on Sunday. In the event of waiting periods, guests can sign up in each room and leave their cellphone numbers.