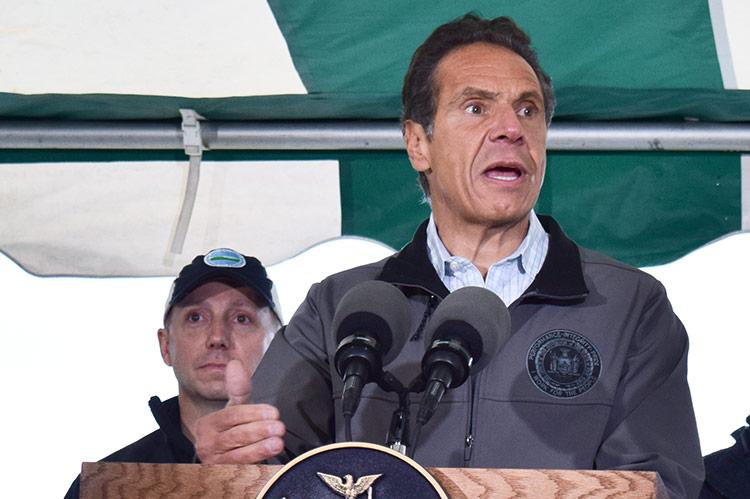 Standing by Lake Agawam, where dense blooms of cyanobacteria, or toxic blue-green algae, have persisted since June, the governor announced the two-week deployment of an algae harvester that he called “the best cutting-edge technology that we have been able to identify.” If the test proves successful, he said, the technology will be employed statewide.

Basil Seggos, commissioner of the State Department of Environmental Conservation, described a system that draws water from the lake’s surface into a machine that separates algae from the water, treats the water, and returns it to the lake. Around 6,000 gallons of water are processed per hour. The algae are sent to a county treatment facility, he said.

“If it works,” the governor said, “it is very promising.” It is not a long-term solution, he added, rather a means “to treat the damage once it is done.”

Prevention, he and other officials stressed, must be a priority. “We also recognize that the trick to stopping these algal blooms is obviously to prevent them happening in the first place,” Mr. Seggos said, “putting an enormous amount of emphasis on protecting watersheds. And that’s something that Governor Cuomo has done, and has really pioneered nationwide right here in New York. . . . But we also know that when blooms happen, we have to do something about them. We can’t sit idly by.”

“We are in a race to save the planet,” the governor said. “This is not just a state issue or a United States issue. It’s an international, global crisis that we’re facing when it comes to the environment, and I think we’re all aware of that now. Unfortunately, and a compounding irritant, is we have a federal government that is just blind to the issue. That basically leaves the states on their own to figure out what to do.”

Upstate water bodies that provide drinking water — “pristine bodies of water for centuries,” he said — are now fouled by harmful algal blooms, “and it’s getting worse every year.”

“When we think about climate change, we think about something global, and national, and on a large scale,” Mr. Warren, who was elected in June, said. “But the reality is that locally, in our Village of Southampton, we are seeing the very effects of climate change at home. That is visually illustrated right here in our green lake, filled with the highest level of blue-green algae and toxicity ever recorded.”

Climate change “is, as the governor said, the crisis, the story of our time,” Mr. Bellone said. “We are on the front lines here in Suffolk County.” But despite the gravity of the discussion, the mood was jubilant as Mr. Bellone described state outlays for water quality improvement, an expansion of artificial reefs in state waters, “and, of course, the largest offshore wind agreement in the nation is happening right here in Suffolk County, on Long Island, leading us to a clean energy future.”

In July, Mr. Cuomo signed the Climate Leadership and Community Protection Act, which sets the state’s goals of 70 percent of electricity derived from renewable sources by 2030 and 100-percent carbon-free electricity by 2040. Simultaneously, he announced the awarding of contracts for two offshore wind projects that will jointly generate 1,700 megawatts of electricity, sufficient to power more than one million residences.

Lake Agawam, the governor said, is “one of the more challenging demonstration sites because the algal blooms are as bad as they are. But we said let’s test it in a place that has a serious and significant problem, and let’s see the progress that we make. . . . The science works, and the modeling works, and now we’ll see what it actually does in operation.” The system is scalable, he said.

With threats to drinking water, the state cannot afford not to act, Governor Cuomo said. “We’re at a point where this is not a question of discretion or making an arbitrary decision,” he said. “I don’t think we have a choice but to do these things, because the planet doesn’t survive, and we don’t survive, frankly, if we don’t get ahead of these issues and tackle them.”