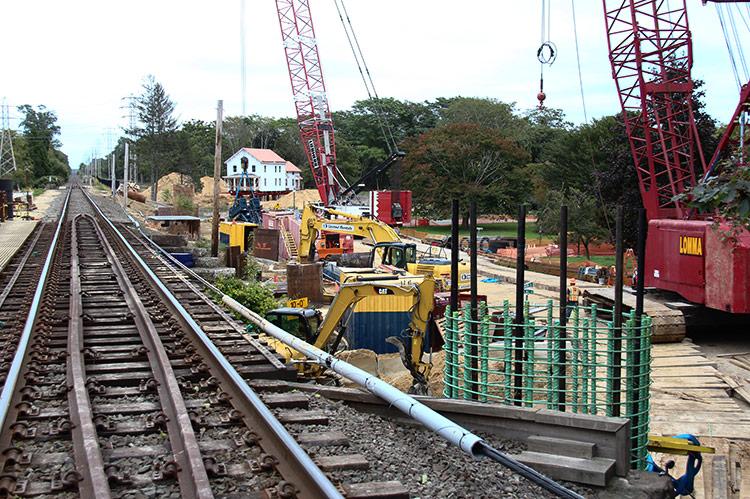 The Long Island Rail Road will shut down train service between Southampton and Montauk from Tuesday through Nov. 10 to install new railroad trestles across North Main Street and Accabonac Road in East Hampton Village.

The existing low trestles, which have prevented large trucks from safely using those roads, will be replaced with ones that are three feet higher.

At the East Hampton Village Board meeting last Thursday, Daniel Knote, a project manager for the L.I.R.R., provided an approximate timeline for the installations, and Police Chief Michael Tracey explained how the village could be impacted when commercial trucks can gain easy access to North Main Street and Accabonac Road, something the low trestles prevented.

The first phase of the project began in August 2018 with the installation of retaining walls. L.I.R.R. crews are currently constructing caisson foundations to support the new bridges, said Mr. Knote.

Once the foundations are in place on North Main Street, which has been closed to traffic, the crews and equip ment will move to Accabonac Road, he said.

Mr. Knote had said that transition would take place early this week, but the village announced on Tuesday that crews would continue to work on North Main Street until tomorrow morning, and, on Saturday, they will move to Accabonac Road, which will be closed until Oct. 26. North Main Street will be open during that time.

“Round-the-clock work will start on Tuesday,” Mr. Knote told the board. The first order of business, he said, will be to add stone ballast — crushed rocks used to build a trackbed — to raise the track by approximately 30 inches to accommodate the new trestles.

Between Oct. 23 and Oct. 26, crews will remove and replace the trestle across Accabonac Road, and, on Oct. 27, North Main Street will be closed again, and the trestle there will be replaced.

After the new bridges are in place, work to raise and resurface the track will continue through Nov. 10. Then, Mr. Knote said, “We’ll be on cleanup duty, restoring everything so you can have your beautiful community back.”

Chief Tracey complimented the L.I.R.R. for the way it has handled the road closures during construction. “It could have been a huge traffic problem for us, but the public and the crews have been great,” he said.

Because the low trestles have prevented commercial trucks from accessing North Main Street from Main Street, Chief Tracey said, Cedar Street has become a major alternate route. “So much so that the Emergency Services Building is often boxed in with traffic,” he said.

The new bridges, he said, could relieve that congestion, and diminish the truck traffic on Cooper Lane, which has become another alternate route.

Chief Tracey recommended the board wait to see how traffic flows, and how neighborhoods are affected, before implementing any restrictions on trucks using village roads.

Accabonac Road, which is a residential street, might be a good candidate for such restrictions, he said. He had consulted with East Hampton Town’s Police Chief Michael Sarlo, and Stephen Lynch, the highway superintendent, and they had agreed, he told the board.

Traffic lights on North Main Street will likely have to be recalibrated to adjust to increased commercial truck traffic, said Chief Tracey. Traffic heading from the village toward Springs will need to be free-flowing enough to prevent a backup from occurring on Main Street at the left-turn lane to North Main Street.

“If that backs up, it’s going to shut everything down,” he said. “Having that flow be smooth is going to be critical to having this all work.”

He suggested that Drew Bennett, the engineer for the village, evaluate the traffic flow, and make recommendations for coordinating traffic lights.

Before the board moved on to other matters, Sue Rakowski, a Talmage Lane resident, asked L.I.R.R. representatives to explain why her house is now rumbling and shaking whenever trains pass by at night. Ms. Rakowski said she has lived on the street for 28 years, and has gotten used to the sounds of the trains, but she said, “Something has changed since construction has begun.”

Other homeowners on the street, she said, had experienced the same shaking. “I’m worried about the real estate prices of the houses, and the structural integrity,” she said.

Mr. Knote said monitors have been installed throughout the worksite to measure vibrations caused by construction. “We’re watching to make sure there’s no vibration that is above a level that would affect anybody’s homes or our tracks because we don’t want trains to derail,” he said. No excessive vibration has occurred, he said.

Vanessa Lockel, who works in government and community affairs for the L.I.R.R., assured Ms. Rakowski she would work with her to identify and rectify the problem.

The trestle work is not only affecting regular train service, but also the new South Fork Commuter Connection service.

The railroad will provide buses from Southampton that will stop at train stations in Bridgehampton, East Hampton, Amagansett, and Montauk while train service is interrupted. East Hampton Town, on the other hand, will provide a more customized bus service with the Hampton Hopper, the shuttle used by riders of the South Fork Commuter Connection trains.

“Those buses will go directly to East Hampton and follow established routes to drop riders at or near their work- places,” Mr. Van Scoyoc said in a release.

Unlike the L.I.R.R.’s buses, the Hampton Hopper’s shuttles will be able to vary their routes to avoid traffic, but they will not stop at train stations.