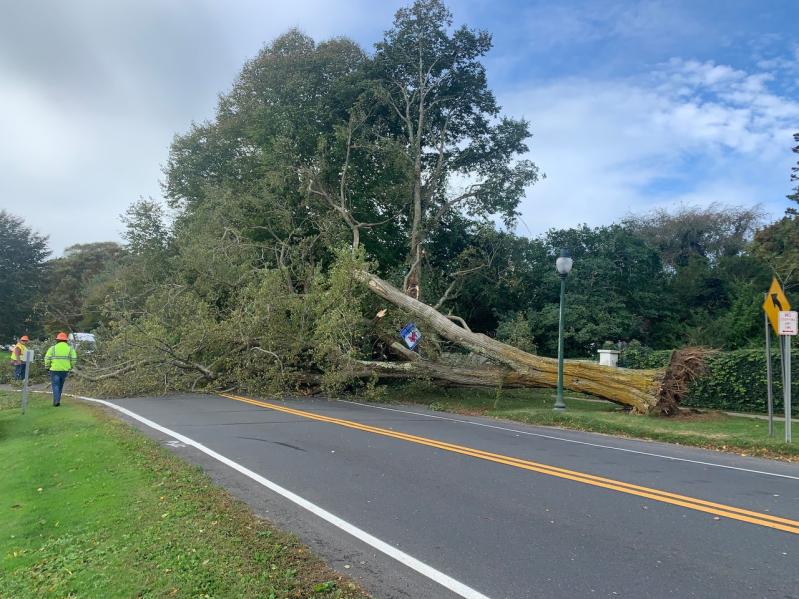 An elm tree fell across a portion of Main Street, by the Baker House, in East Hampton Village on Thursday morning during gusty weather.
Doug Kuntz
By Isabel Carmichael

A portion of Main Street/Route 27 in East Hampton Village is closed to traffic in both directions on Thursday after a large tree fell across the road.

Jose Aragon, a general contractor and property manager, was headed to Southampton in his Ford F150 pickup on Thursday morning just after 10 when he heard and felt something hitting his windshield. He accelerated and a second later realized that a huge branch had hit the back of his truck. A huge, old elm tree 10 feet west of the Baker House and on the same side of Main Street/Route 27 had toppled over at its base and hit another tree, from which a big branch had fallen off onto the back of his truck, damaging it.

"This saved me," he said, pointing to the smaller branches. While they were smaller than the branch that hit the back of the truck, one was big enough to penetrate the middle of his windshield. If he had not accelerated, he said, the branch that had hit the back of the truck might have been the one to fall on the windshield, injuring him or possibly worse.

Lt. Greg Brown of the East Hampton Village Police Department said that the portion of the road near the Baker House and Mill Hill Lane, a state road, will be closed to traffic in both directions for at least two hours until state highway workers can remove the tree.

The village police officer who came to take information from Mr. Aragon was the fifth person to suggest he buy a lottery ticket.