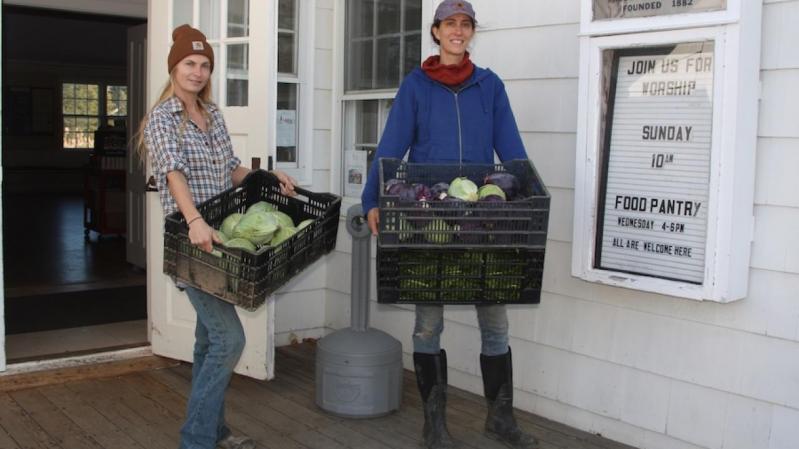 WHY DO THOUSANDS OF OUR NEIGHBORS RELY ON FOOD PANTRIES, STAFFED MAINLY BY VOLUNTEERS, TO MAKE IT THROUGH THE WEEK? AND WHAT ARE WE GOING TO DO ABOUT IT?

The farms, the fish boats, the roadside stands and farmers markets, the huge summer-evening banquet tables heavy with every imaginable delicacy, the restaurants, the ice cream trucks, the sidewalks thick with vacationers wandering with lattes and doughnuts in hand, the beach picnics, the surf caster pulling in the striper—everywhere you look, food. It abounds. It defines this place. But amid all this bounty, there is not enough. There is hunger. Many don’t have the means to eat well, or enough.

Every Tuesday, hundreds of people snake into the East Hampton Food Pantry’s small building off Pantigo Road to receive their share from tables laden with fresh fruits and vegetables, frozen chopped venison and other meats, milk, and baked goods. This scene is repeated at some nine food pantries from Hampton Bays to Montauk that feed upward of 3,000 people a week.

The clients at the pantries are the unemployed, the hard-working but underemployed, the poor, and the elderly.

“We get all types of people,” says Vicki Littman, the chairwoman of the East Hampton Food Pantry (also known as the Vicki of Vicki’s Veggies in Amagansett). When the summer jobs dry up, she says, “right after October you’ll see the numbers increase.” Last year, the pantry served 359 households in July, the lowest number for the year, and 659 at its peak in November.

In a uniquely and sadly ironic “Hamptons” contrast, the East Hampton Food Pantry lies just north of the proverbial and actual highway—just a short hop from the sprawling south-of-the-highway estates, some of which are in use as little as four weeks of the year. As needy folks are lining up and counting out fruits, vegetables, and meat according to their allowed allotments—two veggies per person, two pieces of fruit, one package of meat, and so forth—the mowers and leaf blowers roar across the vast lawns of empty houses, the landscaping budgets of which could provide groceries to dozens of families from summer to winter to summer again.

“What we’re really lacking [in support] is the summer community,” Littman says. “I just don’t think they understand that this is happening out here.”

To many, poverty is invisible on the South Fork, but some 7 percent of households, or about 5,000 in the towns of Southampton and East Hampton, are considered to be below the national poverty level, according to U.S. census data. About 1,450 of those are in East Hampton. A household can hold more than one person, so the census estimates that more than 10 percent of the approximately 72,000 residents of the two towns, or more than 7,000 people, live in poverty.

But even that is a low estimate. The census bureau’s definition of poverty is absurdly low: $16,460 for a household of two, rising to $25,100 for four, which would barely cover rent for four people in a town where the median income is about $80,000, according to the census, and it is hard to find a house to rent for less than $3,000 a month.

In other words, hundreds if not thousands of people above the poverty level are just scraping by, and food is a huge chunk of every household’s expenses.

“We have retired people on fixed incomes, people I’ve known my whole life, artists, working people, the elderly,” Littman says. “We’ve had people who were once donors who come in. They get two or three days of food and this helps them pay their phone bill, pay for their medicine.”

Food pantries are the epitome of what we mean when we speak of community. It should be lost on no one that food brings us together: turkey at Thanksgiving, cake on birthdays and weddings, Sunday afternoon barbecues . .  . .  Add community food pantries to that list of togetherness. These all-volunteer organizations bring together a who’s who of volunteers and businesses to help neighbors. Among Littman’s dozen or so fellow volunteers on a Tuesday in late June were Philip Freedman, a retired anaesthesiologist; Darius Narizzano, a long-time assistant to Steve and Courtney Ross and now a real estate broker, and Russ Calemmo, also known as the Lamp Doctor from Springs, who co-chairs the organization.

Every penny of the operation’s $200,000-a-year budget, and every crumb of food, is donated. A huge list of farms and grocers and regional food assistance organizations donate fruit, vegetables, dairy products, and meats. Bakers donate breads and bagels. Calemmo works with hunters and a local butcher to provide ground fresh venison every delivery day. “You never tasted a Bolognese until you’ve tasted venison Bolognese,” Calemmo says, beaming.

The community convergence that makes pantries happen is a heartwarming tale. Families like the Bistrians and Krupinskis, and the Amaden Gay Agencies (which came through with a huge $54,000 donation last year), as well as the estate of Eileen Roaman Catalano (a gardener and activist who died five years ago) keep the organization going.

Narizzano speaks emotionally of the loss of Ben Krupinski and his wife, Bonnie, who perished in a plane crash off Amagansett in early June: “We lost one of the biggest angels in the community,” he says. “They did whatever they could do to keep us operating. . . . That leaves a big hole for us.”

Finding a decent home for the operation was itself a juggling act among friends and supporters. The East Hampton pantry has moved multiple times since its founding in 1989 at St. Luke’s Episcopal Church. It needed to be a large, year-round space with refrigeration and storage, in a central location, preferably on a bus route. And, most important, it need to be rent free. Two years ago, thanks to key string-pulling, the pantry landed next to the police station, in a vacant building behind Town Hall.

“Larry Cantwell made it happen,” Calemmo says of the former town supervisor. “He’s our hero, our champion. Always has been.”

On that recent food pickup Tuesday in June, a huge group from the elderly housing at Windmill Village arrives at noon and fills their bags. That’s followed later by several mothers with young children in tow. Then an older man who comes in a car driven by someone else, wheeling a respirator. Someone offers to carry his bags. He works slowly through the process. Corn. Peaches. Onions. Cucumbers. “Cucumbers and strawberries,” he says, “they are in season.” He says hello to everyone. It is an outing. He looks up at the volunteers. “You guys do good work.” Someone escorts him back to his car, and after working his way into the front passenger seat, he looks up and waves as the car pulls away. •