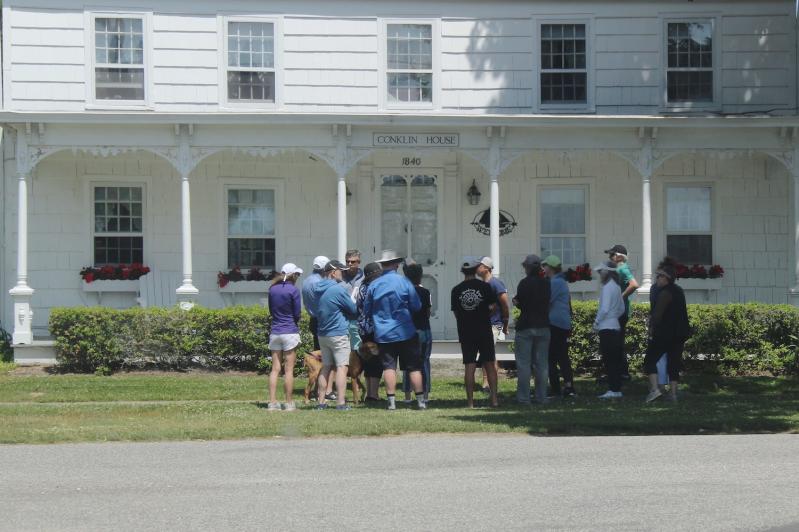 On a recent walking tour of the hamlet, the Wainscott Heritage Project stopped in front of the Conklin House, a town-designated historc landmark on the corner of Wainscott Main Street and Sayre's Path.
Durell Godfrey
By Tom Gogola

A year after a group of preservation-minded citizens successfully endeavored to dismantle and preserve the historic Little House on Wainscott Hollow Road, a new organization, the Wainscott Heritage Project, has emerged with an expansive vision and hopes that it will be able to carve out a historic district in the hamlet similar to those in Springs, Amagansett, and Montauk.

"Our greater mission," said Esperanza Leon, the organization's co-founder, "is to come together and preserve the character and heritage of Wainscott."

To that end, the organization incorporated as a nonprofit in December, organized some hikes through historic parts of the hamlet, and put its focus on the next building it would like to preserve in perpetuity -- the Thomas Strong House, which was built around 1695, and its surrounding five acres, "allegedly the oldest house in Wainscott," said Ms. Leon. It is owned by John Nealon.

"That is a site we are endeavoring to preserve," she said. "The property owner is the eighth generation descendent and is amenable to that happening," she said, noting that the organization had hosted a fund-raising event there on a recent Saturday.

The property came to the preservationists' attention last year as they were working to move the Little House in one piece, and Mr. Nealon offered to have the historic house relocated on his property. That didn't come to pass -- the house, which was built in the 1920s to house migrant workers, was lovingly dismantled and its timbers crated up and eventually stored on town property -- but Ms. Leon and her cohort of preservationists established a rapport with Mr. Nealon.

The Wainscott Heritage Project enjoys crossover membership and appeal with several people on Wainscott's Citizen Advisory Committee, which operates under the umbrella of East Hampton Town. "We're trying to make people in the community aware of what the town board is up to," said the citizens advisory committee chairwoman, Carolyn Logan Gluck, who recalls that when her organization learned that the village might lose the Little House, "a lot of people showed up and saved it."

Ms. Gluck and Ms. Leon both point to the key effort undertaken by East Hampton Town Councilwoman Sylvia Overby, who got the town to store the dismantled Little House on the Town Hall campus, where it awaits a new home. Ms. Overby is also supportive of portions of Wainscott joining, at long last, the ranks of the historically protected districts in the hamlets and villages of East Hampton. "It's their time," she said.

Ms. Leon, who is vice chairwoman of East Hampton Town's architectural review board, said the organization is putting together a list of sites that it has its eye on, "and we do have a handful," including property owned by the Lauder family on Wainscott Pond -- designated by New York State as having historical significance.

"The concern for us is that the lands that are in private hands really have no protection and this one is a very significant example of that," Ms. Leon said. "So we're collaborating on a short list of properties and figuring out how we might work with the owners, the town," to sort out possible easements or other ways to protect and preserve historic former farmland and buildings in town.

"It's important to us that Wainscott have a historic district established," said Ms. Leon, and there's two ways that can happen. The town can itself do it, or it could qualify for federal recognition and be placed on the National Register of Historic Places. The latter option doesn't come with the same built-in protections as a local designation would -- and Ms. Leon noted that, to date, the town board has been "very willing to work with us."

Ms. Leon highlighted efforts undertaken decades ago by the historical preservationist Robert Hefner, who spearheaded efforts to create historic districts throughout East Hampton and who, in 1990, created a survey of the significant buildings in Wainscott. "But nothing came of it," Ms. Leon lamented. Those buildings include the Wainscott School and Wainscott Chapel. The only current town-designated historical landmark in Wainscott is the Conklin House at the corner of Main Street and Sayre's Path.

Ms. Overby recalled that "it was very difficult to get that first historic district in Amagansett," owing to residents' concerns that "somebody was going to take their property in some way." She put the Wainscott waiting period in perspective by noting that even though East Hampton was founded in 1648 it wasn't until the 1990s that any historic districts were identified. "There was movement in the past to do Main Street in Wainscott and it just wasn't being accepted."

At issue for property owners is the potential expense of replacing, for example, windows in a home that's in a historic district. That can get very pricey. "Another concern," Ms. Overby noted, "was in bringing a house into the modern world." When Bluff Road followed Main Street as the second historic district in Amagansett, historic houses there had front-facing facades that couldn't be altered, but homeowners were free to add swimming pools and sliding glass doors in their backyards. "I understand the cost concerns to maintain that community character," Ms. Overby said.

The organization is trying to update Mr. Hefner's survey to establish the boundaries of the would-be Wainscott historic district, "which is basically Main Street and parts of Wainscott Hollow Road," said Ms. Leon.

The urgency is at hand, said Ms. Leon, given the relentless development pressure in Wainscott and the fact that "nobody wants restrictions on what they can do with their properties."

A property at 55 Wainscott Hollow Road is emblematic of the concern raised by the Wainscott Heritage Project and its allies about the future of the hamlet, said Ms. Gluck.

"That property went through multiple owners and it's now in the hands of a developer," said Ms. Gluck. "This is a farming community as well as a community that lives from the treasures of the ocean, and you can still sense that heritage." But it's at risk, she said, and the town needs to do more. "We begged the town to buy 55 Wainscott Hollow."

She encouraged the town board to take a "hard look at its zoning code" to gainsay any efforts to build "great big homes" that she said are totally out of character with the village. "People came to Wainscott because it was a beautiful, low-key place."

Ms. Gluck looked forward to seeing what a now-incorporated Wainscott Heritage Project can accomplish. "I'm sure they'll do some serious fund-raising that we need to do to reconstruct the Little House and take those next steps to preserve what we can in the historic and more inhabited parts of Wainscott."