Dry weather is a killer, irrigation’s a lifeline 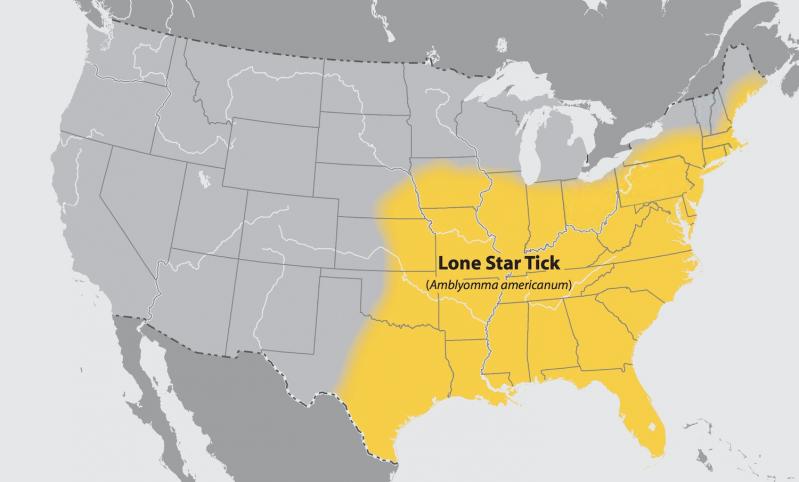 When people talk about ticks here, they’re often talking about Lyme disease and the deer tick that causes it.

But, according to Tamson Yeh of the Suffolk County Cornell Cooperative Extension, the deer, or black-legged, tick is far less common here than the lone star tick. “Lone star is the most common tick on Long Island,” she said.

STARI creates a rash that resembles the Lyme rash. It expands out from the bite location into a roughly circular shape. According to the C.D.C., even trained health care providers have difficulty distinguishing it from the rash caused by Lyme. The agency says definitively, however, that “the rash is not caused by the bacterium that causes Lyme disease.”

“Most of the time, people don’t know what bit them,” said Nadia Persheff of Hampton Pediatrics in Southampton. “So, if we see a circular rash, we treat for Lyme and send their blood out to be tested. There’s no commercial test for STARI, so it’s hard to know exactly how many cases there are.”

“People should learn the difference between a lone star and a deer tick,” she added. “And, I always recommend they hold onto the tick, if they’ve found it attached, and bring it in so we can try to identify it.”

Ms. Yeh suggested that after you remove a tick, you put it in a plastic bag, date it, and place it in a freezer, so that should you later develop symptoms, the tick is available for identification. The Cornell Cooperative Extension in Riverhead will identify a tick for $11; the public can mail them to the office or drop them off.

If you happen to find a female lone star tick, identification is easy because they have a white dot, the “lone star,” on the back. Male lone stars do not have the diagnostic dot.

The STARI “rash may sometimes be accompanied by fatigue, headache, fever, and muscle pains,” says the C.D.C. Because those are also symptoms of Lyme disease, the confusion for patients and their doctors is understandable. But a few other clues, including the tick variety, may help with diagnosis.

The first is very important. According to the C.D.C., “Patients with STARI were more likely to recall a tick bite than were patients with Lyme disease.”

“That’s because bites from lone star ticks are way itchier,” Ms. Yeh explained. lone star bites can itch for months. A bite from a deer tick is never as itchy and can even fade in a day or two. A lone star bite is immediately itchy, almost from the moment the tick is removed.

So the odds are, you notice the bite. If you have a STARI rash, it will show up at the bite area in only six days, on average. Because it’s caused by a lone star tick, it will be itchy. Also, the STARI rash is usually smaller and more circular.

Patients with a STARI, according to the C.D.C., were less likely to have any other symptoms. That is an important clue as well: They see the rash and that is it.

A rash from a Lyme-infected tick occurs in 70 to 80 percent of people, and its onset is longer. While the average is seven days from the bite, it can show up as long as 30 days later. If you have symptoms accompanied by the rash, according to the C.D.C., it’s more likely Lyme.

Of course, it is best not to self-diagnose. If you’ve been bitten by a tick and you see any rash, go to a doctor. Other tick illnesses are accompanied by rashes that aren’t circular, including Rocky Mountain spotted fever, ehrlichiosis, and tularemia.

Ms. Yeh says that often, come July, Long Island has a noticeable decrease in ticks, because there’ll be a dry stretch: a week or more with high temperatures and no rain. Ticks need to stay hydrated; dry weather kills them. However, if your irrigation system is set to water your lawn each night, you’re providing a tick lifeline, in the form of the humidity they need to survive. You’re also encouraging them onto your lawn.

If there’s any good news about ticks and the diseases they carry, it’s that for the most part, the little buggers are avoidable. A tick must be attached for at least 24 hours to transmit most diseases. Spraying your property with the most noxious chemicals won’t help you. To prevent illness, the single most important thing you can do, every night, is a tick check.

Invest in some basic tools. A very bright full-spectrum light — Verilux is one good brand — and a handheld mirror are essentials.

Ms. Yeh even suggests picking up a telescoping inspection mirror with a light.“They’re cheap,” she said, and “allow you to check your back.”

A Holiday Gift for Surfers and Beach Lovers
Holiday Lights Go On at the Lighthouse Saturday
Covid Vaccine Clinic at St. Luke's
END_OF_DOCUMENT_TOKEN_TO_BE_REPLACED