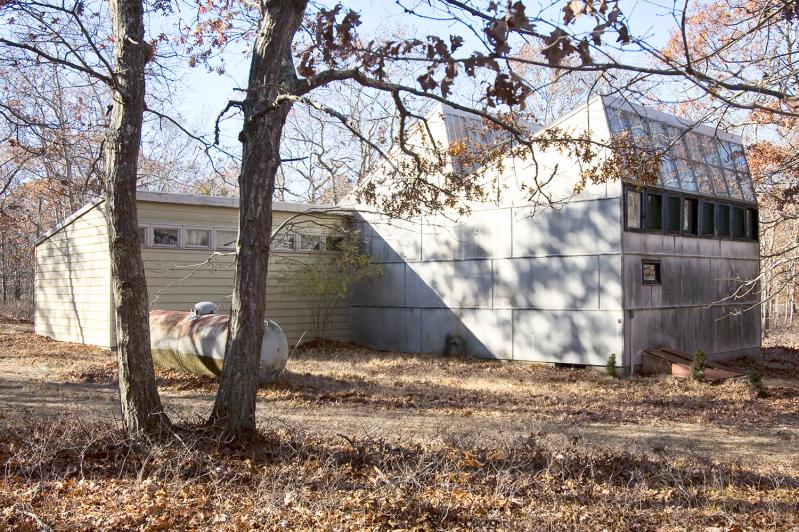 The studios and other structures on the Springs property of the Abstract Expressionist artists James Brooks and Charlotte Park will be part of the Brooks-Park Arts and Nature Center if a management and maintenance plan can be agreed upon.
Jane Martin
By Christopher Walsh

A committee that has been working with East Hampton Town to develop a management and maintenance plan for the Springs house and studios of the Abstract Expressionist artists James Brooks and Charlotte Park is hopeful that its efforts will soon pay off.

A new website for the “Brooks-Park Arts and Nature Center” launched on Monday, and on Sunday at 10 a.m. the East Hampton Trails Preservation Society will host “Brooks-Park: The Intersection of Art and Nature,” a hike of the trails around the property’s 11 acres. Before hikers set out, committee members will hold a brief discussion about their vision for the center.

Much may depend, however, on an assessment of the condition of the site’s four structures, commissioned by the town and to be issued this week. Its author, the consulting engineer Drew Bennett, has said that “there are some things of concern” in his report. Town Supervisor Peter Van Scoyoc said Monday that he had not seen the report, but that “the structural update is not encouraging, from what I heard.”

Mr. Bennett said he had delivered a draft of the assessment to Scott Wilson, director of the town’s land acquisition and management department. Mr. Wilson did not reply to a call or email seeking comment.

When the town acquired the property in 2013, using the community preservation fund, the plan was to demolish the buildings, including the married artists’ respective studios, a residence, and a cottage. The $1.1 million purchase was meant to create open space, but a group of Springs residents formed the Brooks Park Heritage Project and lobbied for preserving the buildings instead.

The Brooks-Park buildings were designated a town historic landmark in July 2014, which allowed for C.P.F. money to be spent toward the site’s restoration, but not for its management. In 2018, the town board approved a management and stewardship plan for properties acquired using the C.P.F., which included an estimated $850,000 to restore the Brooks-Park property.

The following year, however, the town’s property management committee concluded that “due to deterioration and vandalism, the buildings are now derelict and the cost of restoration is considered to be prohibitive.” It recommended that the structures be demolished and the site cleared, and the ar chitectural review board approved a demolition permit in January 2020.

That spurred a renewed push for a not-for-profit entity to manage and maintain the site. The committee that was formed for that purpose issued a final draft to the town in December, said Janet Jennings, a member.

The center “celebrates the artistic legacies of James Brooks and Charlotte Park through the preservation and interpretation of their home, studios, and natural environment, inventive and inclusive educational programming, arts-related activities, and opportunities to discover, experience, and learn from its eleven undisturbed acres of woodlands and natural habitat,” the plan states. Stewardship of the center is focused on restoring the four buildings and maintaining the grounds to preserve the artists’ legacy and ensure public use and enjoyment.

Brooks died in 1992. Park, who died in 2010, “was an avid naturalist,” Ms. Jennings said this week. “She has journals filled with her recordings of sighting different bird and plant species.” The artists “stayed in their sanctuary, surrounded by nature and beauty, and used that to be inspired in their art. To us, it seemed a beautiful thing to bring together, so we’ve nicknamed it the Intersection of Art and Nature. That’s what we’re trying to put across, that it’s a place where not only young, budding artists and naturalists can come and learn how to create a lifestyle for themselves, but integrating the natural world into their creative process, and vice versa. Not only for artists but for all mankind, learning how to incorporate nature into their lives in order to lead a richer life.”

The proposed management and maintenance plan calls for use of renewable energy systems and “environmentally sensitive materials that ensure the protection of wildlife habitats and our ecosystem.”

“We want to appeal to a wide demographic,” said another committee member, Marietta Gavaris. “Nature lovers, bird watchers, hikers, preservationists, people who love architecture. We’re widening the scope of the site to ensure we draw a wide-ranging crowd, which is possible here.”

The committee, she said, is “a fabulous group of people diligently working to make sure we preserve the site.” What’s more, she said, the population density of Springs is “another great reason to have an 11-acre woodland site with its cultural history preserved.”

“We want to highlight the nature aspect of this — we think it’s really important — alongside the art part,” Ms. Jennings said. “But the two together is what I think sets us apart from the other artist studio complexes that have been saved.”

Mr. Van Scoyoc said on Monday that “I am committed to try and do whatever we can to save the buildings.” He is “very much encouraged by the efforts of Jane, Marietta, and that group. They’ve taken a keen interest in it. That’s what it takes: The community has to show its support for what will become, I think, significant expenditure of C.P.F. funds to restore the structures. So where there is support, I think there will be success.” He did add, however, that he is “a little discouraged by the continual decline of the structures.”

But Ms. Gavaris said that on a site visit last year, the preservationist Mike Devonshire reported that “the buildings are all eminently restorable, with a generous amount of evocative authenticity able to be preserved.”

Sunday’s hike is a collaboration between the center and the trails preservation society. Those interested in participating have been asked to meet on Eastside Court, off Neck Path. Irwin Levy, who recently joined the committee, will lead the hike.

The committee has applied for status as a nonprofit organization. “We’re still waiting for more green lights from the town, but hoping to get more in the next week or so,” Ms. Gavaris said. The town board will review the management plan, she said, “and determine a budget they’re comfortable with investing in the project.” The town and committee will also have to sign a license agreement in order for the plan to proceed.

“We’re cautiously optimistic,” Ms. Jennings said. “We all understand that it is a heavy lift. But we really believe in this project.”