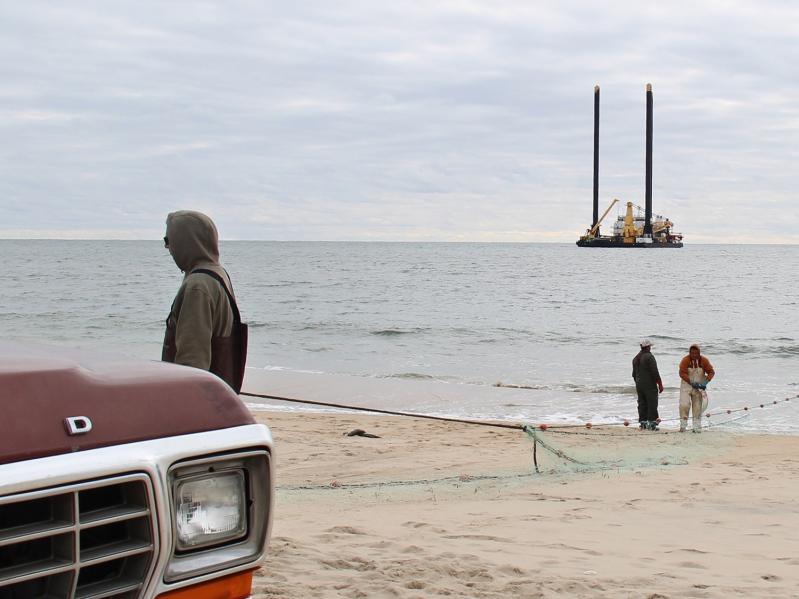 With a 183-foot-long lift boat positioned in the distance off Wainscott, where it will be used in the construction of the South Fork Wind farm cable route, a crew of fishermen on the beach used traditional dory methods to gillnet for striped bass.
Durell Godfrey
By Christopher Walsh

The Jill, a 183-foot-long lift boat with jack-up legs of more than 300 feet, arrived at its position off the beach in Wainscott on Tuesday, where it is to remain for approximately three months and be used in construction of the South Fork Wind farm.

A 201-foot support vessel, the Brave, arrived shortly after the lift boat. Both had traveled up the Eastern Seaboard from their home port in the Gulf of Mexico to Connecticut’s Bridgeport Harbor, after which they traveled the 95 nautical miles to their position about a third of a mile off the beach at the end of Beach Lane.

The wind farm’s export cable will make landfall at that beach, and from there travel underground to an interconnection station off Cove Hollow Road in East Hampton, where it will connect to the electrical grid.

The Jill, which will rise to about 15 to 20 feet above the water, will be put to use in horizontal directional drilling to create a pathway and install a conduit for the wind farm’s export cable, which will be buried around 80 feet under the beach in the sea-to-shore transition area, starting roughly 1,500 feet offshore and extending under the beach and to the parking lot at the end of Beach Lane.

The Brave is to make twice-weekly trips to Bridgeport to collect equipment and make crew changes.

Onshore, the drilling equipment has been readied and a sound wall, to mitigate construction noise, installed at Beach Lane. Drilling of a pilot hole, a first pass through to connect the conduit, began last week and continues this week, a spokeswoman for the developers, Orsted U.S. Offshore Wind and Eversource Energy, told The Star.

Also onshore, the developers’ contractor is excavating on Wainscott Northwest Road and installing tie-ins to an underground vault between Two Rod Highway and Roxbury Lane. A traffic detour is in place during construction hours of 7 a.m. to 7 p.m., Monday through Saturday. Work also continues on the export cable’s path along the Long Island Rail Road corridor.

A vessel carrying the export cable itself is due in March. The wind farm’s 12 turbine foundations, to be situated approximately 35 miles off Montauk Point, are to be installed starting in May, and the turbines placed on the foundations in August.

New York State’s first offshore wind farm, South Fork Wind is scheduled to be operational by the end of 2023.