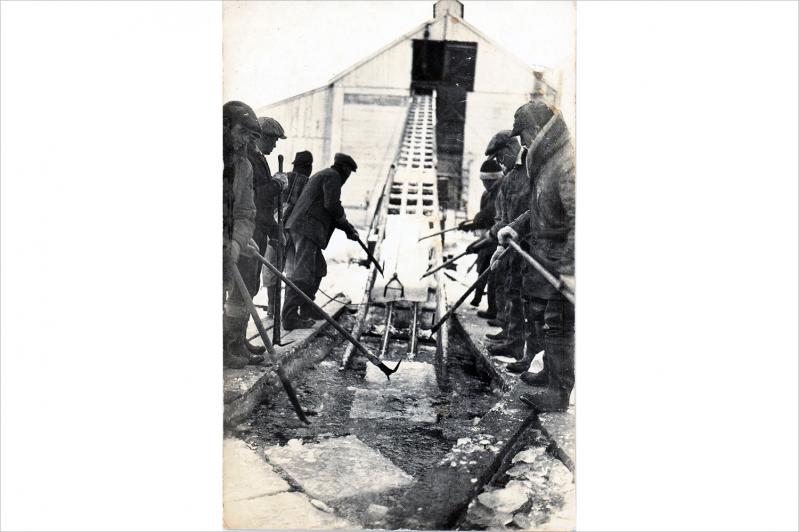 This image from the Carleton Kelsey Photo Collection shows the process of harvesting blocks of ice. Before the mass production of mechanical refrigeration and air-conditioning, ice blocks were stored in ice houses and sold for the purpose of preserving perishable food in warm weather. In this photo, men are standing alongside the water holding wooden poles with hooks attached to the end. These hooks were used to guide the blocks of ice into a channel of water and up a conveyor belt. This system then carried the blocks to a warehouse in Montauk where they were stored and kept chilled until being sold.

Perry B. Duryea's ice house on Tuthill Road in Montauk is the likely location of this picture. Perry Duryea Sr. (1891-1968) first came to Montauk in 1909 as a clerk for the Montauk Fish and Supply Company's store. He bought into Capt. E.B. Tuthill's local fish business in 1920. Tuthill originally purchased the land on the eastern edge of Fort Pond in 1882, and ran the business until 1931, when he sold his shares to Perry B. Duryea Sr.

During the Hurricane of 1938, Duryea's ice house was destroyed by the heavy winds. Edward Pospisil (1896-1959) of Montauk took on the job of rebuilding a sturdier ice house for Duryea. On April 1, 1939, Duryea's new ice plant was ready for production in relatively the same spot as the previous building, featuring a stronger frame construction atop a concrete foundation. The facility regularly harvested an average of 10 tons of ice daily and relied on a ground-cork-insulated ice box to maintain the product. With increasing trouble from warming winters, Duryea's updates included the purchase of an Atlas-Imperial engine for $4,500, in order to produce ice when it could not be harvested.