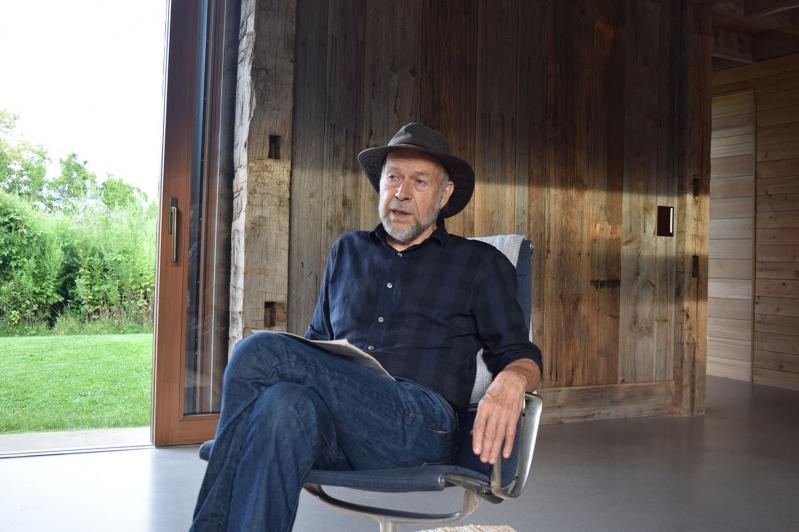 James Hansen discussed his career as a scientist and his dire predictions as to climate change with a small group in Sagaponack last week.
Christopher Walsh
By Christopher Walsh

The threat of sea level rise is greater than that presented in the Intergovernmental Panel on Climate Change's own dire reports on climate change, a renowned and controversial scientist told a small group in Sagaponack last week, but similarly divisive proposals to combat anthropogenic climate change would be both safe and effective, he said.

James Hansen, who for four decades has sounded the alarm about climate change, spoke to around 20 people last Thursday at the residence of Nisa Geller and Jeffrey Tannenbaum, founder of the Titan Grove holding company, which is focused on building and owning businesses that promote sustainable, healthy, and just capitalism.

In 1981, around the time he became director of the National Aeronautics and Space Administration's Goddard Institute for Space Studies, The New York Times published a front-page article about the research Dr. Hansen and colleagues had conducted, which predicted "a global warming of 'almost unprecedented magnitude' in the next century. It might even be sufficient to melt and dislodge the ice cover of West Antarctica . . . eventually leading to a worldwide rise of 15 to 20 feet in sea level." At the time, the earth had warmed four-tenths of a degree above the preindustrial average.

The warming trend the team of scientists had detected from 1880 onward demonstrated the greenhouse effect, the temperature rise resulting from increasing amounts of carbon dioxide caused by the burning of fossil fuels, the article summarized.

The extreme weather of 1988 brought more attention to Dr. Hansen's research. This attention continued the following year, after he testified before the United States Congress, "because I complained that the White House had changed my testimony," he told the gathering last week. But the scientific community itself was less than supportive, he said, waving a 1989 article in Research News titled "Hansen vs. the World on the Greenhouse Threat." "What really bothers them," the author wrote of Dr. Hansen's fellow scientists, "is not that they believe Hansen is demonstratively wrong, but that he fails to hedge his conclusions with the appropriate qualifiers that reflect the imprecise science of climate modeling." By then, the earth had warmed six-tenths of a degree above the preindustrial average.

"I thought the testimony was actually pretty good," Dr. Hansen said, "but the scientific community is very conservative and they thought I was stepping out ahead of scientific facts. And NASA was very angry about this. It had repercussions."

Dr. Hansen, who is now the director of the Climate Science, Awareness, and Solutions Program at Columbia University's Earth Institute, asked the gathering last week to "have an open mind to the possibility" that the 2021 I.P.C.C. report "has a major flaw. I think it's gravely important."

But the planet's predicament is more ominous with respect to sea level rise, Dr. Hansen posited. "I'm talking about only a sliver of the report, but in my opinion it's the most important part of the report." That, he said, is the I.P.C.C.'s projection of sea level rise "primarily due to thermal expansion of the oceans and some mountain glacier melt." But, he said, his own modeling predicts the shutdown of both the Atlantic and Southern meridional overturning circulation. The former is a system of currents that transports warm water from the tropics into the North Atlantic; the latter, he said, is "the escape valve for ocean heat."

As that escape valve closes, Dr. Hansen wrote in a recent essay, that heat warms the deeper ocean, with maximum warming at a depth of one to two kilometers, "the depth of ice shelf grounding lines, the part of the ice shelf that exerts strongest restraining force on landward ice. West Antarctic ice shelves thus have begun to melt more rapidly and the ice streams feeding them have accelerated."

This, he said last week, "is the existential threat, because within the next few decades, the global temperature will be at a level such that the equilibrium response of the ice sheet will include the loss not only of the West Antarctic ice sheet, but of the portion of the East Antarctic ice sheet called the Wilkes Basin." In both areas, the ice sits on bedrock well below sea level, "where you can get the ocean lapping against the ice sheet. That's where you have the potential for exponential ice sheet disintegration."

And that, he said, would make significant sea level rise a certainty. Despite decades' worth of global conferences and agreements to limit warming, greenhouse gas emissions, with the exception of a slight dip in the pandemic-beset 2020, have continued to rise. "If we continue that for a few more decades, we're at a point where the equilibrium response is sea level rise of 10 meters, which means we lose all coastal cities. And a majority of the large cities in the world are coastal."

There's more: Already, the low latitudes and, in the summer, the subtropics, "are becoming uncomfortably warm" and "will just become not a good place to live. And then you're going to have tremendous immigration pressures from regions where people don't want to live anymore, and from the coastal cities. Then, you have an ungovernable planet."

The falling use of coal is reducing aerosols -- particulate air pollutants and smoke. Aerosols, Dr. Hansen said, reflect sunlight, lessening the heating of the earth. It may seem a paradox, but their reduction, he said, is "the likely explanation for why global warming has accelerated this last decade." On the one hand, declining use of coal is good for the climate; on the other, reduced aerosols reflect less sunlight, promoting further warming. Aerosols, while providing one benefit, present a Faustian bargain, Dr. Hansen said, "because it's keeping us cool, but the aerosols are also killing 3.5 million people a year from outdoor air pollution. . . . We have to clean up the air pollution for the sake of human health, but there's going to be a climate impact of that."

Dr. Hansen proposed several solutions to the climate crisis, each of them, unsurprisingly, controversial. But each, given the urgency, should be enacted, he said. Based on his experiments, "when you cover the Southern Ocean with aerosols in the stratosphere, it has exactly the opposite effect of the greenhouse gases," increasing the Antarctic bottom water formation and the flux of heat from the ocean into the atmosphere. "This would actually work to try to counteract what we're doing with the greenhouse gases." The effect is virtually immediate, he said.

Some see the addition of sulphate aerosols into the stratosphere as a dangerous gamble, reflecting a fear of impact on the ozone layer and a general worry about geoengineering. But past and present human activity "is the most extreme geoengineering," he said. "Technologically, we can solve this problem in a way which is pretty natural: Put salt aerosols over the Southern Ocean, where nobody lives. They're not going to harm anybody. At the same time, you've got to be moving to clean energy."

A price on carbon that rises over time is another solution, Dr. Hansen said, urging leadership by the United States and China. He referred to Citizens Climate Lobby, which advocates for a phased-in imposition of a fee on fossil fuels that could be collected by the United States Treasury Department and rebated in full to households. That structure, the group says, would drive a transition to alternative-energy technologies while incentivizing more efficient use of energy. "It's not a tax, it's revenue neutral, and it favors low income people who have a smaller carbon footprint than wealthy people," he said.

Dr. Hansen also advocated for expanded use of nuclear power. He called its phasing out "a crime for young people and future generations, because we know how to make much better nuclear power," calling it in his recent essay "the clear preference for climate" with "the smallest environmental footprint of all energy sources." Modern, passively safe reactors can shut down without human intervention or external power to keep the nuclear fuel cool, he wrote.

Dr. Hansen will publish "Sophie's Planet: A Search for Truth About Our Remarkable Home Planet and Its Future" in September 2022. Its conclusion, he said, depends on the outcome of the United Nations Climate Change Conference, known as COP26, to be held in Glasgow in November.