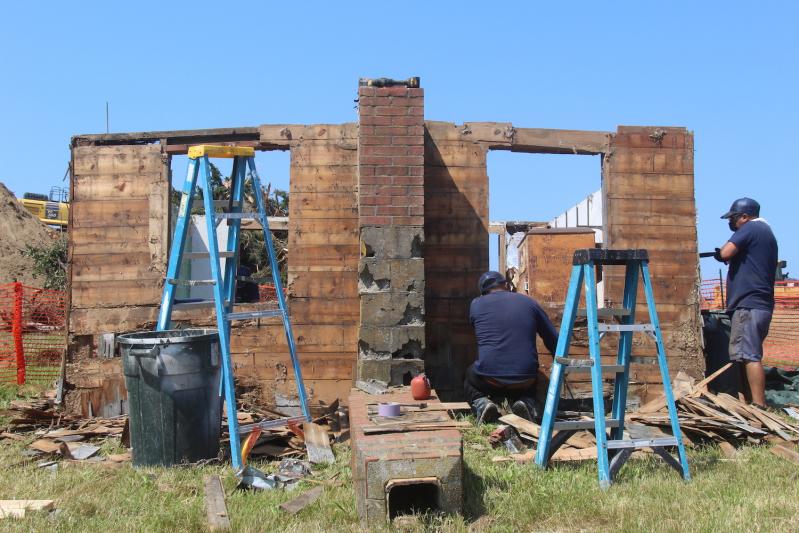 On Monday, Michael Davis Construction began taking the shack apart piece by piece and labeling, bundling, and storing the pieces to eventually be reassembled on a different property.
Durell Godfrey photos
By Jon Kuperschmid

"I have been driving past that building for decades. It has always been there," said Esperanza Leon, referring to a dilapidated little shack in Wainscott known as the Little House, which was built in the 1920s to house migrant workers.

When she and a group of fellow Wainscott residents learned that the property had been sold and the house was to be torn down, they got to work to save it, and their efforts have borne fruit.

The 400-square-foot house on Wainscott Hollow Road was on the Strong family farm and housed workers in the 1920s and 1930s, when migrants would travel from the South in search of farm work.

"After finding out that the owner did not want to keep it, there was an interest from the town and from Wainscott to preserve the structure," said Ms. Leon, a member of East Hampton Town's Architectural Review Board who has been instrumental in the effort to preserve this significant piece of Wainscott history.

She and a group she called her "dream team" — Carolyn Logan Gluck, Susan Macy, Bruce-Wayne Solomon, and Jon Stoner — scored a major victory in their fight for the preservation of the Little House. "We forged ahead, and over the last few months have been very fortunate to have people from the community supporting and encouraging us and doing things, to get to the point where the house is now being deconstructed and will be re-assembled on a new site," she said proudly.

The journey to this point has not been an easy one, though. The original deadline to make a move before the shack would be demolished was May 15, but as preservationists pleaded for more time, a hard July 7 deadline was set. "The original plan was to save the house from demolition and move it off to a new site in one piece," Ms. Leon said, but many realized that that solution would be impossible. "The house had no foundation and was essentially resting on the ground. A lot of it is rotting and has been lying derelict. Most people figured it was easier to raze it and don't bother, but we persisted."

A solution emerged at the 11th hour. Through Michael Davis Construction and in consultation with Dawn House Movers, a plan was developed to take the Little House apart and salvage whatever was possible. On Monday, Davis Construction began taking off the roof shingles, taking the shack apart piece by piece, and labeling, bundling, and storing the pieces. Some of it will have to be rebuilt with new material. For that reason, preservationists and architects will be instrumental to the next phase of the project. Dimensions and photographs were taken in preparation for the eventual reconstruction of the house at a new site.

The elusive new site, however, was not easy to find, but after an extensive search, it seems as though the Little House That Could has finally found its new home, on private property not that far south of its current site, across from the Wainscott School.

As to what else the future holds for the Little House, it's still undefined. First, Ms. Leon said, "we are going to have to figure out the best way to preserve it, and before it is reconstructed, we are going to need a solid plan." Thankfully, "Preservation Long Island is aware of the project and are willing partners in making sure this is all done correctly."

The threatened demolition of the shack represents a larger trend in the area: the erasure of Wainscott farming history. The potato barn, just feet away from where the Little House stands on the former Strong farm, is being developed and "reimagined." Once the property is landscaped and altered, another piece of history will be gone. The fact that even a small piece can be preserved is important.

"The shack has been a landmark in this part of Wainscott for many years, but the building and its history have been neglected," Ms. Leon said.

According to an oral history of "The Little House," the structure was home to the only Black workers in a white farming community — the 1920s arrivals living among those whose families had farmed in the area since 1668. Since there were no telephones, when Wainscott residents needed work done they would drive to the Little House and arrange for a Black family to take on the job, or leave a note at the general store. The Black workers who lived in the house contributed significantly to Wainscott's farming industry, but there seems to be no known written history or documentation of their lives, and removing the building would have been one more step in erasing from history their contributions to East Hampton Town.

"The shack did not belong to someone famous, and it's not even a household name, because people think that to be put on a national register that has to be the case," Ms. Leon observed. "This is not a 17th-century structure, it dates back to the 1920s at most. But it is a special little house. There is an energy on that property and in that house. It is like the walls are speaking."

The fight for the house's survival is still not over, but its significance can't be understated. As Dennis D'Andrea, a long-serving member of the Wainscott Citizens Advisory Committee, put it: "At a time in this community's history when the landscape is changing rapidly and radically from pastoral to suburban; when the population's middle class and agrarian roots have been nearly obliterated by an upper-class gentrification that denies the existence, past or present, of a working class, the continued existence of this modest migrant workers' house is essential to an expansive view and representation of the area's past."