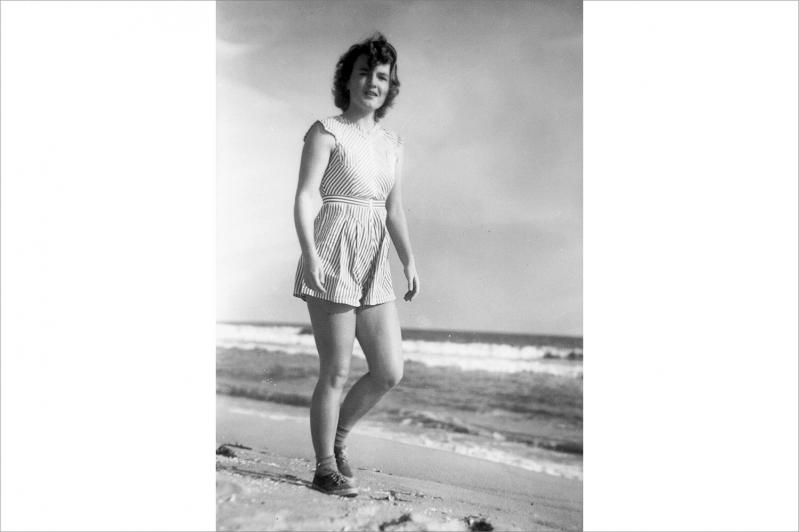 In this photo from the Amagansett Historical Association's Carleton Kelsey Collection, Dorothy Lester (1919-2015), about 18 years old, walks the beach in a striped romper and canvas sneakers, with the wind in her hair on a nice warm day. Her outfit is timeless; she could easily be spotted on a beach today, even though this photo was taken around August or September of 1938.

Based on other similar images of Dorothy as a bicyclist and bathing beauty, along with Carleton Kelsey's History Project Inc. oral history, Dorothy spent a lot of time with her sister Betty Louise Lester (Harkness), often called Pat. Dorothy and Betty Louise were daughters of Edward Lester (1882-1948), a Coast Guard captain, and Lena Miller Lester (1889-1978), who lived on Atlantic Avenue in Amagansett, a few houses away from Kelsey, on a street filled with familiar last names like Edwards, Bennett, Parsons, and Ryan.

Kelsey spent a lot of time with the Lester daughters between college graduation in 1935 and his service in World War II, according to his oral history. He remembered frequently driving the younger Lester sisters to Moltisanti's for hamburgers and cocoa during that time.

By 1940, Dorothy's life changed dramatically. She left her childhood home, which The Star described as "on the beach," marrying Raymond M. Hedges (1917-1991) on June 30, 1940. The newlyweds lived on Cedar Street in East Hampton for a time, and at the outbreak of World War II Hedges was employed by Ray Osborn in Wainscott, presumably working with Osborn's Produce. The couple eventually moved west to Northport, where they raised their children, including Raymond Jr., who was born in 1941.