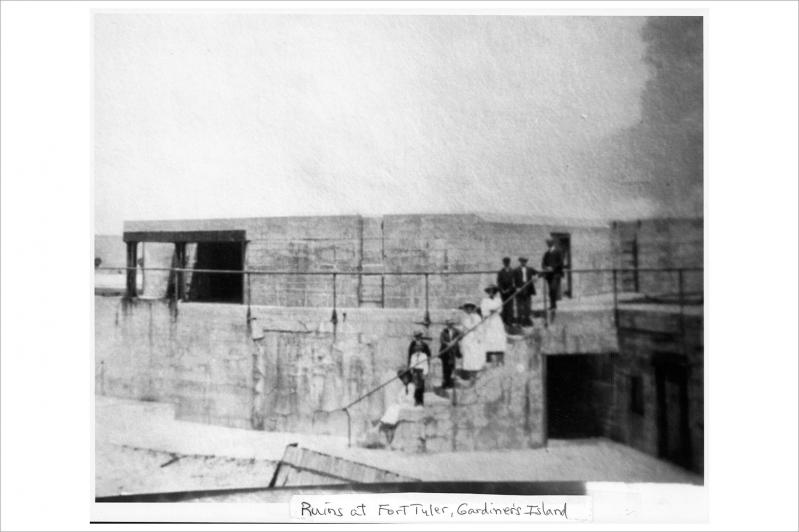 The photo is undated but based on the visitors' attire and the history of the fort, it was probably taken between 1899 and 1916. The Army built this structure in 1898 in response to the Spanish-American War. Many feared the possibility of attacks along Long Island's shore by Spanish ships en route to New York City and other nearby ports.

Fort Tyler was one of several fortifications built along Long Island Sound, collectively known as the Eastern Shield. Before the fort was built, Gardiner's Point Island was the site of the Gardiner's Island lighthouse, which was constructed before the Civil War and destroyed shortly ahead of the construction of Fort Tyler.

The fort was named in honor of President John Tyler, who married 24-year-old Julia Gardiner in 1844. The cost of the fortress totaled $500,000, and rocks and stone had to be hauled by barges and tugboats. Before Fort Tyler ever had a chance to defend our shores, the Spanish-American War ended, and fears of an attack by sea dissipated. The fort was abandoned and began to decay.

In 1936, the Army Air Corps briefly used the crumbling fort for bombing raid exercises. Because of the constant bombardment of live bombs and artillery, the fort became nicknamed "The Ruins."

Two years later, President Franklin D. Roosevelt issued Executive Order 7941, declaring the site a wildlife refuge called the Fort Tyler Migratory Bird Refuge. The once-impressive stronghold that attracted sightseers and picnickers has since been reduced to rubble and swallowed by the rising tide.