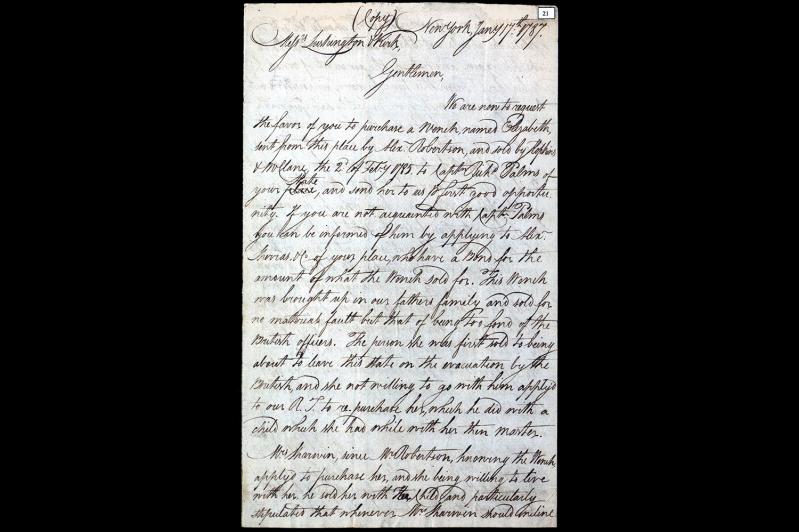 This is an original copy of a letter Robert Townsend, a Manhattan and Oyster Bay merchant, and his brother, Solomon Townsend, sent to two Charleston, S.C., merchants, John Kirk Jr. and Richard Lushington, on Jan. 17, 1787.

While Oyster Bay is over an hour away to the west, the Long Island Collection holds many items from Robert Townsend, better known today as Culper Jr. from the Culper Spy Ring (featured in the television period drama "Turn"). Morton Pennypacker, the East Hampton historian and antiquarian, founded the Long Island Collection and published much of the original research on Robert's role in the spy ring.

The Townsend brothers wrote to Lushington and Kirk because they were merchants who had purchased Solomon Townsend's iron anchors and also held antislavery beliefs. Before the age of LinkedIn, business networks operated among friends of friends, who were often compelled to help one another on behalf of a mutual friend.

The brothers appealed to this social custom, asking the men to help them repurchase a woman their family had previously enslaved named Elizabeth. During the war, Elizabeth had escaped with British troops quartered in the Townsend home. Many enslaved people followed British soldiers with promises of freedom, but after many twists and turns, Elizabeth had not been freed, but rather sold south to Charleston.

This correspondence is noteworthy because it illustrates the truly unusual arrangement Robert Townsend made for Elizabeth, and his efforts to help her and her baby. The letter reveals how, between 1780 and 1783, she was sold to a British man in New York who was forced to evacuate at the war's end. Elizabeth was then sold away to Charleston, prompting the Townsend brothers' appeal. They hoped their business associates' objections to slavery would compel them to help buy Elizabeth and return her to New York.

Robert's arrangement caught the attention of Claire Bellerjeau, the education director at the Townsends' Oyster Bay home, Raynham Hall, now a museum. These letters became the key documents in Ms. Bellerjeau's new book, "Espionage and Enslavement in the Revolution." She will speak more about Elizabeth and Robert's arrangement tonight at 7 in a Zoom book discussion through the library.

Registration and more information are at easthamptonlibrary.org.