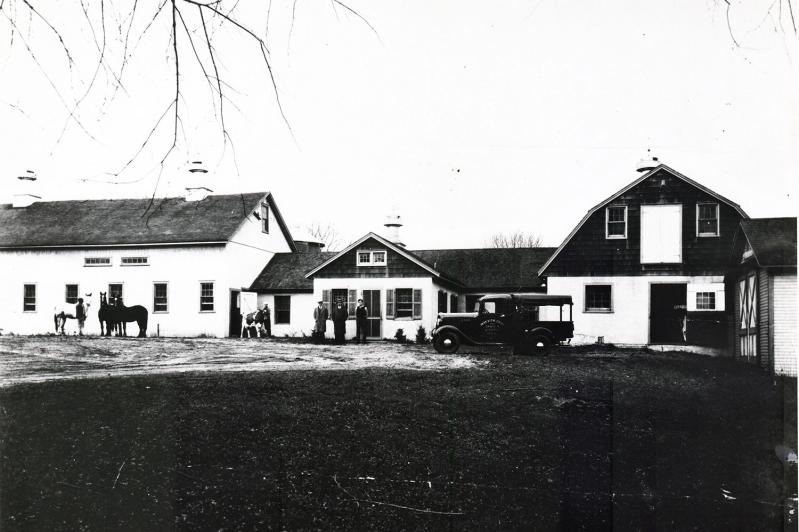 This photograph shows farm buildings at Dune Alpin Farm in East Hampton sometime after 1934 and before 1960. The date is estimated based on the appearance of the farm's owner, Abraham Katz, at the right side of the image.

The property was originally owned by Blanche B. and George L. McAlpin, who bought it in 1906. The name was inspired by a sand dune on the land along with the family surname. The McAlpins owned the Hotel McAlpin on Broadway and 34th Street in Manhattan, which was the largest hotel in the world at the time it opened in 1912. The family sold it in 1938.

Around the same time, in 1934, Abraham Katz (1909-1978), born in Patchogue to Lithuanian immigrants, began leasing Dune Alpin for $1,000 per acre, going on to buy the property in 1936 for $11,000. For the next several years, Katz developed the farm, establishing a significant dairy farming operation.

Tragedy struck on Nov. 5, 1960, when a fire swept through the main barn. Faulty wiring was believed to be the cause. Two hundred firemen from the East Hampton, Bridgehampton, Amagansett, and Sag Harbor departments assisted in putting out the flames.

The East Hampton Star quoted Katz as saying that 84 out of 100 head of cattle had been saved. A few firefighters had minor injuries from fighting the blaze, and the total damage amounted to more than $100,000.

Katz vowed he would rebuild and make the farm even bigger. A year later, construction was completed on three new buildings with state-of-the-art machinery. A purchase of 20 to 30 cows increased production. Katz ran the farm for another decade before selling it to James M. Strong and Frank L. Brill in 1972.

When Abe Katz died in 1978, the property was known as the Tipperary Horse Farm. Dune Alpin is now a housing development, but the silo and some of the original farm buildings remain.