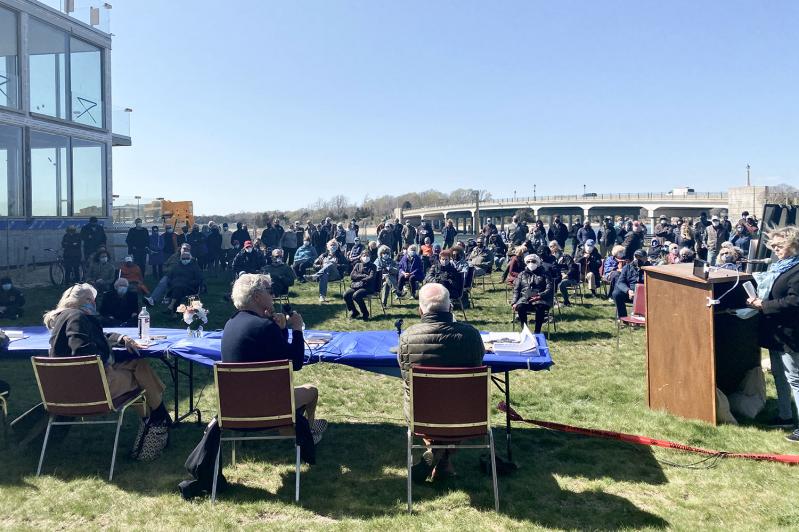 Sag Harbor Village residents weighed in on Bay Street Theater's plan for a new theater, the departure of the 7-Eleven, and proposed restrictions on waterfront development at a public hearing held in John Steinbeck Waterfront Park on Friday.

The village board scheduled the hearing — the first to be held in-person since the early days of the pandemic — to give residents a chance to voice concerns about the new zoning district the village wants to create along the waterfront, as well as Bay Street Theater's plans for the area.

"We cannot control who can buy what, we can't control who can sell what, but what we can do is control the use, the size, the scale, and most importantly, the character of what is put on any property," said Mayor Kathleen Mulcahy, explaining why a new, stringent code is necessary. The waterfront area is "where we are most vulnerable," she said.

Bay Street's development plans offer a case in point, she said. The theater announced in October that it would build a new home at the site of the West Water Street Shops building adjacent to Steinbeck Park, and that the nonprofit Friends of Bay Street had been formed to acquire the land, develop the property, and finance the project. Since then, the theater has made other real estate purchases in the area, only some of which have been made public, she said.

"We know that either Friends of Bay Street or one of the investors has bought the Dodds and Eder building," she said referring to 11 Bridge Street, a property Adam Potter of Friends of Bay Street has said was purchased as a possible site for businesses, including a convenience store, that have been displaced from the Water Street Shops building. The village has learned that the theater has reached a deal to lease a nearby parking lot from National Grid, Ms. Mulcahy said, "and we have been told they plan to buy 2 Main Street," an adjacent building that contains the K-Pasa restaurant, and the Espresso da Asporto and Yummylicious food shops.

Mr. Potter said the theater plans to tear down the building, and maintain the parcel as an open space that could serve as an extension of Steinbeck Park. Representatives from Bay Street had been invited to attend the meeting to discuss their plans, Ms. Mulcahy said, but had declined.

Bay Street offered a first look at the design for the theater in a video presentation on April 6. In addition to a 299-seat main stage, the complex would contain smaller, more adaptable spaces for productions and educational programs, a retail store, and a restaurant. The theater has yet to disclose the proposed square footage or other dimensions.

"I want to be very clear this is not a pro-Bay Street or anti-Bay Street conversation," Ms. Mulcahy said on Friday. "I personally am thrilled that Bay Street has bought the property . . . and is going to stay here in the village."

James Larocca, a trustee, disagreed. "I was not among the trustees who was thrilled that Bay Street bought the 7-Eleven building," he said. At the time, he said, the village had been seeking to buy the property with the use of community preservation fund money.

Kathryn Levy, a 29-year resident of the village, was one of the first members of the public to offer an opinion on Bay Street's proposal. "We don't need Lincoln Center here," she said to loud applause. "I think the theater would overwhelm the village." The village has already allowed too many overlarge structures to be built, she said, citing the Watchcase and 2 West Water Street condos, as well as Billy Joel's Bay Street residence. Pointing to a West Water Street condo still under construction nearby, she said, "This is an egregious example of the road we must not go down again."

Jane Holden, a lifelong resident and a Bay Street supporter, said the theater would be a welcome replacement to the existing building. "I don't understand why people want this ugly building to stay here," she said, pointing to the West Water Street Shops.

Pamela Kern questioned why any structures are allowed to go up in the area. "I don't understand how the Army Corps of Engineers said all of Long Island Avenue is wetlands and we're still building on it," she said. She suggested the board should focus more on the high cost of living in the village. "There is no low-income housing, there isn't anything to provide for our younger generation unless they're rich," she said. "My kids are scared to death they're going to have to leave."

Rabbi Berel Lerman, the executive director of the Center for Jewish Life, which has had to vacate the West Water Street Shops building, asked the crowd for suggestions for a new spot. "If anyone has any ideas, I'm actively looking," he said.

The 7-Eleven is set to close tomorrow, too.

Louis Grignon, the owner of the Sag Harbor Yacht Yard and Marina, expressed concern about the proposed code's limit on building heights. A 35-foot-tall structure on his property may soon need to be torn down, and he would need to replace it in kind, he said. "If you make it that much harder for me to restore boats, you're really curtailing and hurting the flavor of the town," he said.

"What we're talking about here is the character and nature of the village," said Kurt Leggard. "Buildings should grow, but they should grow correctly." A bigger problem for the village, he said, is its demographic makeup. Sag Harbor is an aging village, he said, and "without young people in this village to sustain the work that needs to be done, this village will go into disrepair." Bay Street's plan will also have a negative impact on the young, he pointed out. "Without the 7-11 . . . where are our kids going to get their beer?" he asked. "When you remove something you have to replace it with something that's going to be viable."