Item of the Week From the East Hampton Library 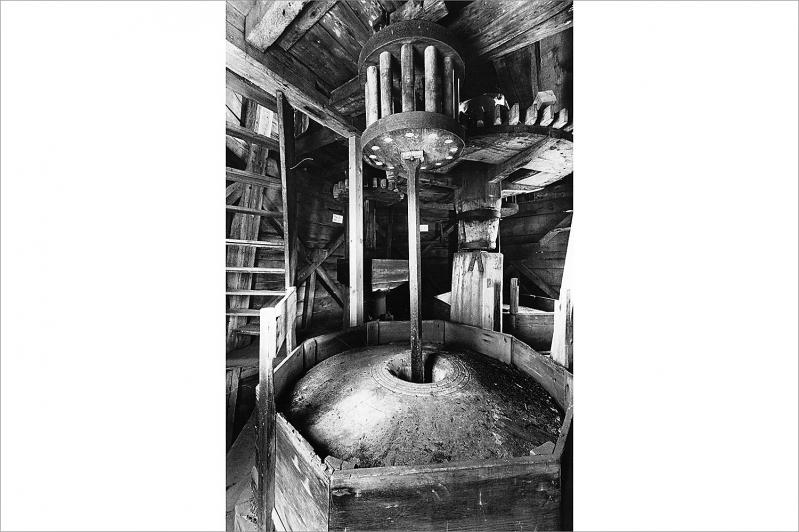 This photo, taken by Harvey A. Weber (1917-1991), is part of a collection of architectural images of structures throughout the Town of East Hampton compiled as part of the activities related to establishing historic districts here. It shows the inner workings on the second story of the Pantigo Windmill.

Directly in front is the east burrstone, and beyond that is the shaft of the internal winding mechanism. These highly complex gears and mechanisms, primarily made of timber, display an impressive level of craftsmanship achieved by Long Island millwrights.

In 1845, the mill was sold to David A. Hedges, who moved it to his residence on Pantigo Road. There he installed cast iron to secure the sail stocks, which in 1879 would be damaged in a storm. Hiram Sandford bought the mill and had it moved slightly to the corner of Pantigo Road and Egypt Lane. The mill was named for its 72-year reign on Pantigo Road.

Gustav Buek (1850-1927) bought the windmill in 1917 and relocated it to the rear of his residence, which is now known as the Home, Sweet Home Museum on James Lane. Upon his death, the Village of East Hampton obtained both the house and the mill. The village started restoration work on the mill in 1978.

While the mill ceased operations in the late 19th century, it is included in historical tours and remains behind Home, Sweet Home, overlooking the grassy common area adjacent to the South End Burying Ground and Town Pond.