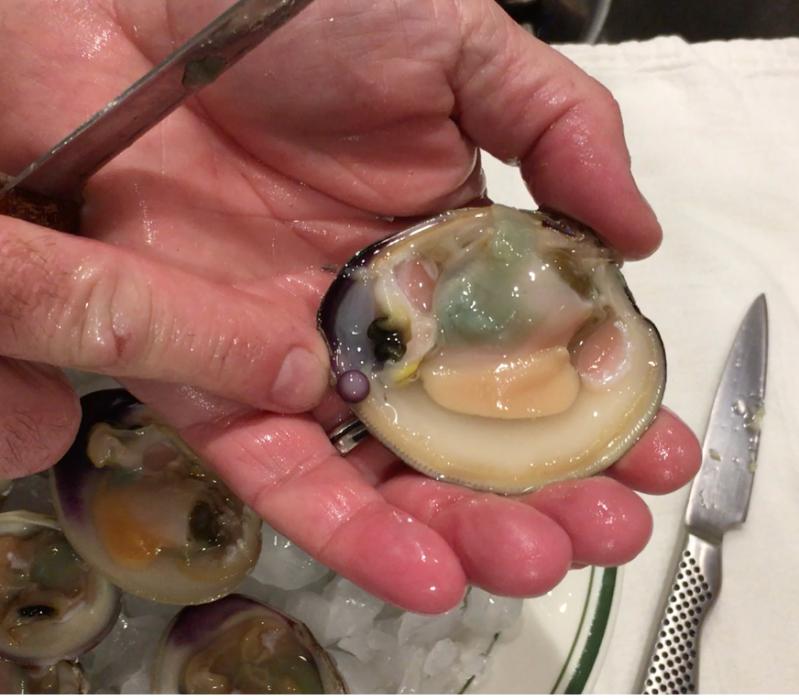 Alex Miller found his second purple pearl inside a shucked clam after he dug it out of Three Mile Harbor last week.
Alex Miller
By Taylor K. Vecsey

In the midst of the coronavirus outbreak, Alex Miller gave his friends something else to talk about — at least for the moment.

The Springs resident found a rare purple pearl inside a clam he had just opened. But this is not his first such find. In May of 2019, he shucked a clam and found one then, too.

Wampum purple pearls found in quahogs are extremely rare, according to a past conversation with Barley Dunne, the director of the East Hampton Town Shellfish Hatchery. Cultured pearls that are relatively round are rare, as they often come up in teardrop or odd shapes, but wild, uncultured pearls found in a clam are even rarer, he said.

"To have that happen again, at a time when we're all going through these different emotions of separation as well as the anxiety and food resources and the virus — I'm almost embarrassed to admit that I had this weird second stroke of serendipitous luck," Mr. Miller said by phone earlier this week.

He explained that he went clamming in Three Mile Harbor last Thursday — "I needed to get out of the house," he said, and anyway he had not been clamming since the summer. He raked up clams for an hour and brought home 32 keepers. He opened them up, putting some aside for pasta sauce. He was eating the first half dozen on the half-shell when he made the discovery.

"The eighth or ninth one that I opened up, there it was, sitting on the lip, this tiny pearl," he said.

"I can't really describe my reaction because the last couple of weeks have been sort of numbing," he said. He snapped a photograph with his cellphone, but held off posting it right away because, he said, it seemed surreal that he would have such luck.

The pearl he found in May was from inside a clam he had bought at Stuart's Seafood Market in Amagansett, and that batch of clams had come from Accabonac Harbor.

The most recent clam was twice the size of the one he had purchased at Stuart's. This clam may have been larger, but the pearl was smaller, the size of a frozen pea, about a third of the size of the earlier find, he said. The pearl from May was the size of a garbanzo bean and about 5 karats in weight.

The shape was nearly identical, though. The Gemological Institute of America, which he had paid to appraise the first pearl, described this one as a button shape. Its value is between $3,000 and $5,000 if he were to auction it off.

"The money doesn't really interest me as much as the curiosity of how rare it is," Mr. Miller said. So what is he going to do with the pearls? "Now that I have a second one, all of my friends are urging me and I see the glint in my wife's eye — now that you have two it might make a nice setting. . . ."