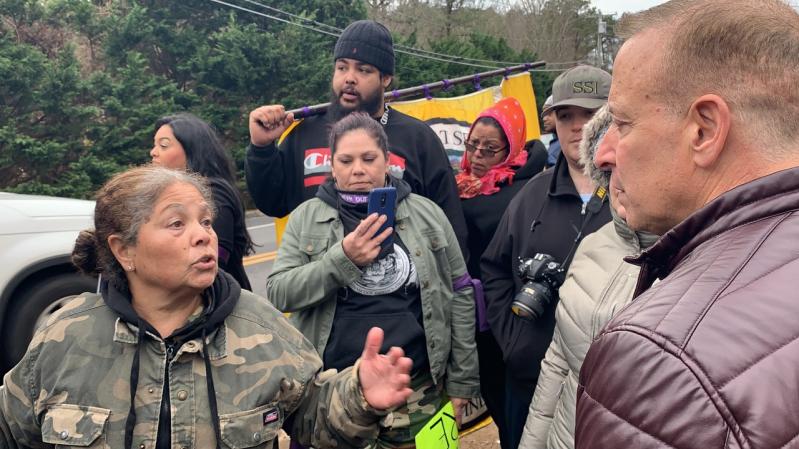 As Shinnecocks and their supporters gathered outside a construction site on land they said was the site of sacred burial grounds, Rebecca Genia, a longtime activist spoke to Steve Graziano, the developer, about keeping soil on the property until experts can sift through it.
Taylor K. Vecsey Photos
By Taylor K. Vecsey

“We are not protesters, we are protectors,” Margo Thunderbird, an elder, told a crowd that gathered outside the Shinnecock Nation Cultural Center and Museum on Tuesday morning to prepare for a demonstration in front of a construction site on land that the Shinnecock Indian Nation considers the site of sacred burial grounds.

About two miles from the museum, farther west in Shinnecock Hills in an area called Sugar Loaf, about 75 people came together in an effort to stop the building process at 513 Montauk Highway. Sugar Loaf has been designated by New York State and Southampton Town as a critical environmental area. Even so, the town authorized a subdivision last year and issued a building permit for a single-family two-story residence with an attached three-car garage. Clearing of the land has already begun.

While there have been no reports of human skeletal remains being found there, on a nearby property on Haw­thorne Road bones believed to be those of Shinnecock ancestors were found while a foundation was being dug in 2018. The developer of the Montauk Highway property assured members of the nation that no bones had been found. They told him they are likely not as visible as he might think and that experts need to be allowed in. At the Hawthorne Road property, workers had at first only noticed a glass flask, they said.

The town purchased the Hawthorne Road property for $450,000 with money from the community preservation fund. Much of the battle to do so was detailed in the documentary “Conscience Point,” about the decades-old fight to preserve Shinnecock land and sacred burial grounds.

Shinnecock leaders are hoping for the same result with this property, and the town attorney said he is working to expedite appraisals for a C.P.F. purchase.

“This is a joining of forces to bring our message to the Town of Southampton, State of New York, and to all the developers who come out here and desecrate in their rush to construction,” Ms. Thunderbird told the crowd at the museum. “This is a demonstration of determination and we are determined to stay the course of resistance until ‘not one more acre’ becomes our rallying cry and our collective reality.”

“These lands we are about to head into were stolen — literally stolen in 1859,” said Shane Weeks, a co-chairman of the tribe’s Graves Protection Warriors Society.

One of the consequences, he said, is having to repatriate and rebury remains — whether they are unearthed in construction or come back to the tribe after having been in private collections or museums. “Just in the last year alone, over 100 remains that were taken across the East End of Long Island were repatriated back to us and just in the last couple of weeks we’ve had to rebury 106 of our ancestors’ remains that were repatriated for us.”

The nation tries to bury them as close to where they came from as possible, but sometimes that’s not an option, he said. “We have to negotiate and figure out a way to put them back in a resting place where hopefully they can rest in peace forever. And so, it’s a burdensome work, it’s a hard work to carry for our people, but it’s something that has to be done, unfortunately.” 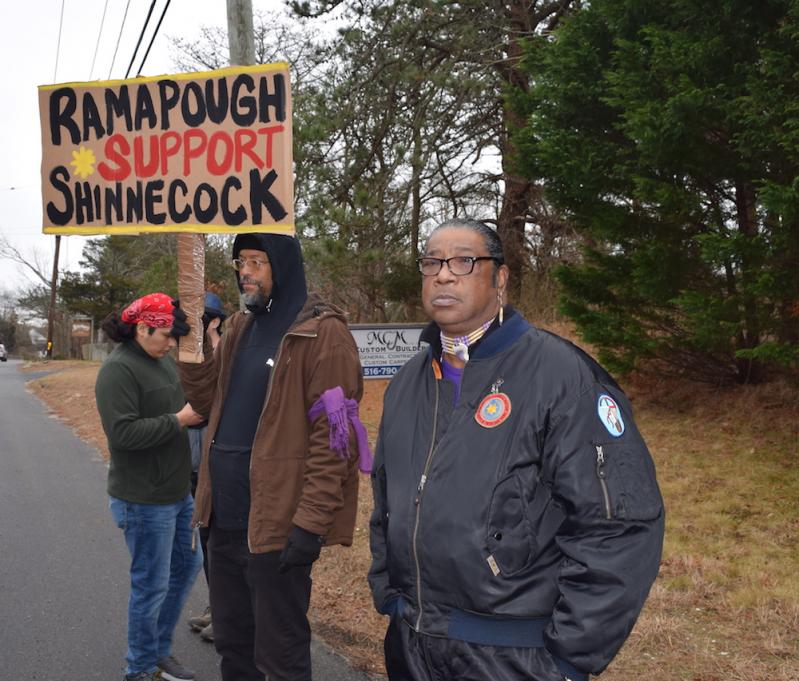 The Shinnecocks were joined by members from the Mashantucket Pequot Tribal Nation in Connecticut and the Rampapough Lenape Nation in New Jersey, among others. “You’re not alone and we will continue to band together. That’s the only way we are going to make these things change; we show up, we show face and we come together,” said Andre Strongbearheart, a Nipmuc tribal citizen who traveled from Grafton, Mass.

Mr. Weeks sang a native song of thanks while playing a drum before a caravan of cars headed to the construction site.

People of all colors and backgrounds, from near and far, stood shoulder to shoulder on both sides of the highway, holding signs such as “Protect Sacred Land!” and “Defend the Sacred” and “Are cemeteries next?”

Some tribal members played music and sang. Sage was burned. One of the four sacred medicines, it cleanses the spirit of the space, Mr. Weeks explained as he moved smoke with golden eagle feathers.

Some passing drivers honked their horns in a show of support. But when a tractor trailer carrying a big yellow bulldozer arrived to excavate an old cesspool on the site, the mood changed. There were discussions about whether to block the driveway. They cleared a large opening for the truck to get in at one point, but then they moved back in position. Four people spread out with a large sign that read, “When will we get our Shinnecock Hills back?”

Rebecca Genia, a longtime Shinnecock activist and the focus of the “Conscience Point” film, was intent: No trucks were getting in and certainly no trucks were leaving, carting away mounds of soils containing ancestors’ remains.

Several people recalled a 2000 standoff at Parrish Pond in Southampton over a 38-home subdivision on 62 undeveloped acres that once belonged to the Shinnecocks. Ms. Genia, who had been blocking a bulldozer in that protest, was the first of three arrested; some were hurt in a scuffle with police.

With four Southampton Town police officers and two state troopers waiting on the sidelines Tuesday, and some behind-the-scenes phone work to summon attorneys from the town, the demonstrations continued along Montauk Highway. Members of the Pequot chapter of the Redrum motorcycle club advised demonstrators of their rights.

Skyler Johnson, a 19-year-old college student who is seeking the Democratic nomination for the New York State Senate, was among them. “I just think it’s important to stand in solidarity with the Shinnecock tribe. They are a sovereign nation and this is sacred lands. It’s morally bankrupt to develop on these lands. It’s why I urge Southampton to put an injunction on the land to stop building, and I would urge any construction companies involved to refuse the contract.”

Jim Burke, the town attorney, and Christine Scalera, now the deputy attorney (though just a few weeks ago she was a Southampton Town councilwoman) arrived and spoke privately with the developer, Steven Graziano, who had also arrived. When the attorneys came down from the construction site, Mr. Burke assured Ms. Genia and Mr. Weeks they are working hard to come up with a solution.

Further upsetting Shinnecock leaders, it turns out that during the subdivision process four years ago, the Shinnecock Nation was not properly informed there was an application of a potentially sensitive nature before the Southampton Town Planning Board. Mr. Burke confirmed that he could not find any proof that the applicant had complied with the town code that requires a notice be sent via certified mail to the nation’s post office box. While the onus is on the applicant, it is also up to the town to make sure it gets done before a hearing takes place.

Had they known about the application, leaders said they would have pushed for soil tests, including ground-penetrating radar, since it is a culturally sensitive area. An archaeological survey that was required was not enough.

Ms. Genia and others hoped they could get the developer to agree to halt construction or get Southampton Town officials to issue a stop-work order because the proper process had not been followed. While neither happened, the developer said no soil would be leaving the site. Ms. Genia referred to it as a gentleman’s agreement.

He also spoke to Ms. Genia and other tribal members, pledging his willingness to sell if the town is prepared to make an offer, though he insisted he had done nothing wrong. He has a contract to deliver the property built by July 4, and has to keep moving forward.

“We’re trying to buy time,” Mr. Burke said. Meanwhile, the town will not only be appraising the property, but also three other lots the developer owns behind it — a bulk purchase that would actually be an easier swing for the town than one partially developed lot. “Whether I can meet what he needs, I don’t know,” Mr. Burke said.