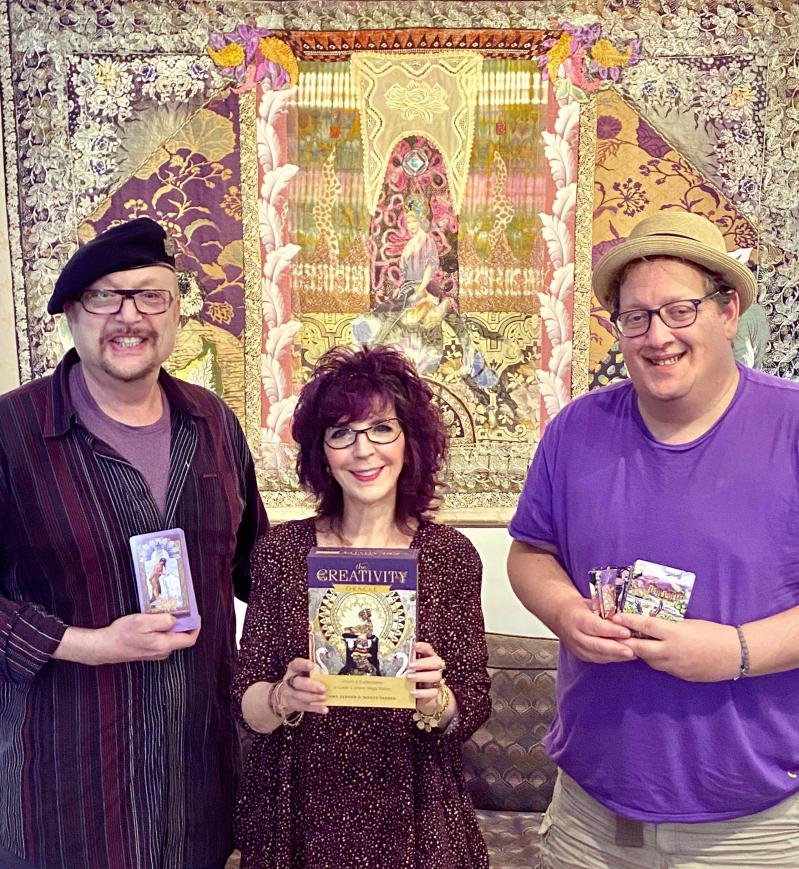 From left, Monte Farber, Amy Zerner, and Jeff Pulver are the hosts of “Ask the Oracles,” an astrology-themed, weekly talk show on Zoom.
Harry Hornung
By Christine Sampson

Monte Farber, Amy Zerner, and Jeff Pulver share something in common with Jimmy Fallon, John Krasinski, actors from the hit Broadway musical "Hamilton," and the "Saturday Night Live" sketch comedy ensemble: During the Covid-19 pandemic they have all been using Zoom to reach their respective audiences in some way, tapping into the connective power of the app.

In the case of Mr. Farber and Ms. Zerner, who live in Springs, and their friend Mr. Pulver, who lives in Great Neck, the Zoom where it happens is called "Ask the Oracles." It's a weekly talk show that fits squarely -- and spiritually -- into the realm of divination.

By definition an "oracle" can be both a person and a tool: someone or something that can channel information, direction, or clarity into a language that can be more easily understood. The three hosts take questions from their guests, in this case basically anyone from around the world who wants to tune in and gain some insight into some aspect of their lives. The only topics that are off-limits are politics and health: "They can be so charged," Ms. Zerner said.

The pandemic "forced us to set up a little corner of our house to do this Zoom show," said Ms. Zerner, an author, artist, and fashion designer who taps into psychic intuitions in her work. "What I love about it is because we've all been locked down, we get to reach our audience as authors. . . . This is a new way to do it."

"We've been doing oracles since oracles weren't cool," added Mr. Farber, who lends his psychic and astrological gifts to his work as the author or co-author of more than 40 books, kits, card decks, and other esoteric tools.

Mr. Pulver has gifts of his own, but earned acclaim as a tech guru known for bringing people together at conferences and for his work as a pioneer of voice-over-internet technology. He even has an influential 2004 Federal Communications Commission ruling named after him. Whereas, once, the telecommunications giants dominated everything, his F.C.C. decision, he explained, eventually allowed for the widespread creation of startup broadband apps and systems involving video and voice.

"A generation later, people take video for granted," Mr. Pulver said. "We're living in a world where these technologies exist . . . but it took a pandemic to shift the thinking."

Here's how "Ask the Oracles" works: You think of a single question. When it's your turn to ask, you (unmute yourself and) go for it. Mr. Farber, Ms. Zerner, and Mr. Pulver will shuffle their Tarot cards, or a deck of Karma cards, or other oracles. Then, they'll pull a card and interpret it. A lot of times, Mr. Pulver said, their cards and messages happen to align.

More often than not, people find themselves so fascinated by the process and results that they don't quit the Zoom room after their turns are over. They stick around and listen.

"With technology, it gets so impersonal," Ms. Zerner said. "This personalizes it," Mr. Farber added.

"Our show is like you're talking to each individual . . . through this technology that we use in a unique way," Ms. Zerner continued.

"We seem to find symmetry -- it's like a serendipity of sorts," Mr. Pulver said.

Themes of self-love, mutual support, and creative exploration underscore many of the conversations. Anyone can join the show, which is at 12:30 p.m. Eastern time on Mondays. A sign-up link can be found at theenchantedworld.net.

In a blog post earlier this year, Zoom's creators said they love that the app "is able to keep people connected, and . . . that Zoom is being used to create original content and keep people entertained. If Zoom can help restore some sense of normalcy during these difficult times, we're all for it."

Also at the heart of the question-and-answer show is empowerment. "The ancients" have a saying, Mr. Farber said: If you know your question, then you probably already know the answer.

"We did this for everybody," he said. " 'Ask the Oracles' is to show everyone that they're their own oracle."