First Laura Hayward assisted at birth, then she rode in Hampton Classic 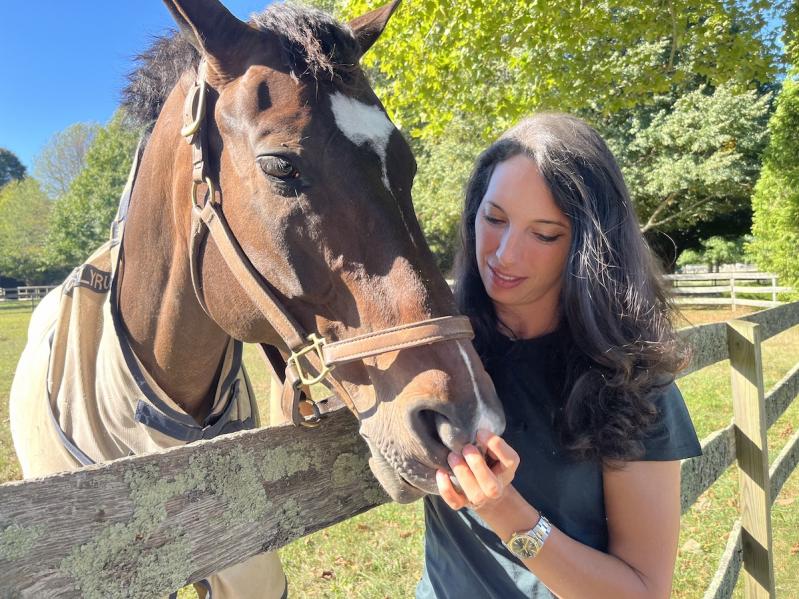 Laura Hayward and her horse, Bravo, a Hanoverian cross whose show name is Gold Standard, shared a relaxing moment together after a whirlwind day last Thursday.
Christine Sampson
By Christine Sampson

At 6:43 a.m. last Thursday, Laura Hayward of Sagaponack was at Stony Brook University Hospital with her pregnant client, who was on the cusp of giving birth. Ms. Hayward, a hypno-birthing doula and practitioner of reiki, helped one of life’s miracles take place that morning: The baby latched beautifully to his mother as Ms. Hayward helped them transition smoothly into the postpartum phase.

Only after everyone was settled nicely did she experience another small miracle: She drove straight from the hospital to Bridgehampton in trade-parade traffic, making it there in under two hours — just in time to compete in the Hampton Classic.

It was a thrilling day for Ms. Hayward. Last Thursday’s delivery was her third since starting out as a doula, and the 2022 show was her first Hampton Classic appearance. Originally from England, she has been riding horses ever since her grandparents gave her lessons for her 6th birthday.

“The thing about being a doula is you just never know when the baby’s going to come,” Ms. Hayward said. “I really thought I didn’t stand a chance” of making it to the ring, but the new mother deserves credit for “birthing like a pro. She made two things possible that arguably should never be possible.”

Ms. Hayward competed in equitation, a category that focuses on a rider’s conformation to ideal standards of horsemanship, on Aug. 28. Last Thursday’s rounds were in the Jenni Kayne Adult Amateur Hunter low class, a new division at the Classic, which judges the grace, athleticism, and fluidity of the horse. The fields had 50 and 40 riders, respectively. Bravo, Ms. Hayward’s horse, also deserves a lion’s share of the credit. A 16-year-old Hanoverian cross, he is the grandson of All the Gold, a champion Hanoverian stallion and member of the National Show Horse Hunter Hall of Fame. That’s where Bravo, a bay, gets his show name: Gold Standard.

He was a “superstar” that morning, Ms. Hayward said.

“I wasn’t expecting to place,” she said. “All I wanted were some good, clear rounds. And Bravo was amazing. He’s a very understanding horse — I just hopped right on.”

Bravo resides at the Wolffer Stables, not far from the house that Ms. Hayward shares with her wife, Kim Stoltz, and their infant daughter, Savannah. She acquired Bravo two years ago from a friend, Sarah Maslin Nir, who grew up riding in East Hampton and is the author of “Horse Crazy: The Story of a Woman and a World in Love With an Animal.”

“We were hanging out and she said she just wanted a horse to feel safe on, and that she could ride if she got pregnant,” Ms. Maslin Nir recalled last week via text message. “And I said, ‘I have the horse that’s perfect for you.’ “

Ms. Hayward offered to buy him on the spot. “I was shocked, since she never even tried him, but she said, ‘You are a friend and care for me, and if you say this is the right horse for me, it is,’ “ Ms. Maslin Nir said. “That’s just the kind of person Laura is. Warm, open, and adventurous — actually, just like Bravo!”

In May, Ms. Hayward won the adult low hunters class at the Long Island Professional Horsemen’s Association show at Wolffer.

“I think because it’s my first real season showing, there was a lot in my head,” she said. “Pace, frame, the fences themselves, what am I going to do to best position him, where are the judges, how do I make the corrections. You’ve got a lot of spectators around.”

It was hectic, but Ms. Hayward remained calm. Not only is she a practitioner of reiki, a form of energy work that’s very grounding, but as a former financial industry director in prime brokerage sales, she is also no stranger to stress.

“Operating on no sleep and dealing with chaos and characters in the room is something I’m quite used to from my finance days,” she said.

She quit her job in June, six months after giving birth to her daughter, then launched a website for her doula services, justpause.com, and has never looked back. A dream of hers is to attract clients who also ride horses. “When I was in finance, all of my passions were outside of work, but now I have a career I’m passionate about,” she said.

Thursday, she said, “felt like such a gift. What an honor it is to be in the room when a new life comes into the world — it’s next-level magic. I came from the birth with that exact mind-set. I was so buoyant, and then I arrive and my horse is show-ready. But my energy wasn’t frantic, it was really positive, and he was mirroring that.”

Ms. Hayward hadn’t jumped a horse in competition since her teenage years, but now that the thrill is fresh in her mind, “I would love to go back,” she said. “That’s probably going to be our last show for this year, which is another reason it mattered so much to make it. I’ve got the taste for it now — once you’ve done the Classic once. . . ."