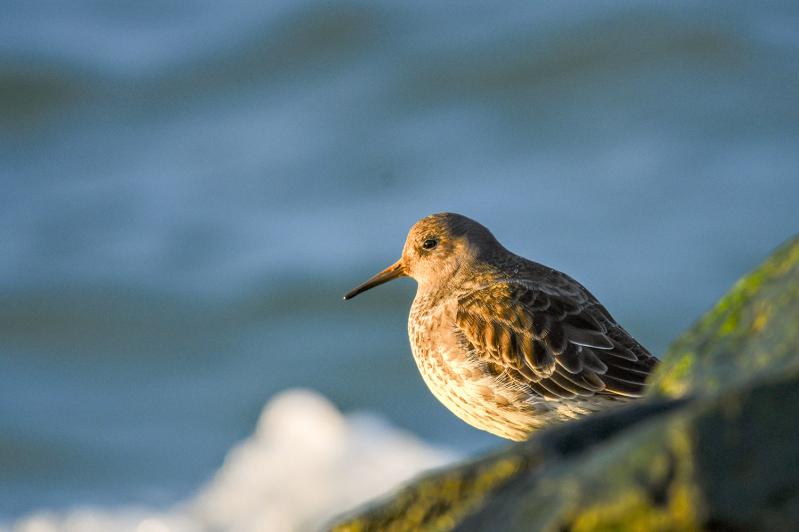 No other sandpiper winters as far north as the purple sandpiper.
Jay Rand
By Christopher Gangemi

“Why are you going to profile a purple sandpiper?” my wife asked.

It was a good question. It is a bit of a “deep cut” as far as our local birds go. First, it’s the only sandpiper that we tend to see in the winter months. Other sandpipers leave by late autumn and head to the Caribbean, or South and Central America. The purple sandpiper enjoys our winters.

You could go see one, today.

Second, the purple sandpiper highlights one of my favorite themes: Everything is habitat. In this case, even the end of those Army Corps of Engineers-built jetties from the 1960s that jut into the cold Atlantic between Georgica and Hook Ponds.

Evan Schumann of East Hampton, a birder, tipped me off to their interesting history. In 1935, Juan Terry Trippe, the founder of Pan American Airways, bought a house near Georgica that was inundated during the Hurricane of 1938. Nearly 30 years later, in 1965, he persuaded the Corps to build the groins to protect his shoreline, Mr. Schumann said.

Perhaps Mr. Trippe was a fan of purple sandpipers? The food they find on the jetties sustains them through the winter.

Finally, the purple sandpiper remains my most memorable “miss.” What this means is that I tried to see the bird, I was in the proper habitat to see the bird, at the right time, and I didn’t see it. I missed it. Here’s the story, in brief.

I was on my first bird walk ever. It was 2005, my first daughter was only a month old, I was sleep deprived, and I had a $40 pair of travel binoculars that seemed to make distant objects smaller, not larger. Hugh McGuinness, a famous East End birder who created a great sense of community among birders with a simple weekly email blast, led the walk.

I recall arriving late, and since I was obviously a new birder, Hugh came over and introduced himself. A very earnest group of birders were staring out into the ocean. Others studied the near shore, as if waiting for an enemy to arrive. Minutes later, a giant celebration erupted when a purple sandpiper was spotted on some low-tide rocks.

“A purple sandpiper?” I remember thinking. I didn’t know birds could be purple.

Directions were given to the exact rock on which the bird stood. Everyone seemed to scramble around, trying to see it.  In the end, I didn’t see it. In fact, I probably did see it, but I was probably too proud to admit I didn’t know what I was looking for. Surely, I thought, the color purple was involved.

So, the first and most important thing to know about the purple sandpiper is that it’s not purple. It’s not even close.

You may read somewhere that they’re so named because there’s a little “purple sheen” in their feathers, but I’m here to tell you that’s a lie. You won’t see purple. A better name would be brown sandpiper. Or better yet, why not magical sandpiper? I wrote to the American Ornithologists Society for an explanation, but I have yet to receive a response. The A.O.S. has, since 1886, managed the checklist of North American birds.

David Sibley, in the bible of bird identification, “The Sibley Field Guide to Birds of Eastern North America,” describes the bird as “stocky and dark, with round body and short, dull orange legs.” Pretty nondescript. Not purple.

So, for the beginner, the best way to see this bird is to know where it hangs out, because it absolutely doesn’t stand out. In the beautiful Peter Matthiessen book “Wind Birds,” he describes it hunting where “the seas crash on the rock coasts.”

This brings us back to those Army Corps jetties. Forget erosion, the purple sandpipers love the wave-washed, ice-encrusted rocks of those jetties. If you can’t find them on those jetties, try the Lake Montauk jetties. Of course, we have our fair share of natural rocky coast too. The low-tide rocks at Ditch Plain are also sometimes fruitful.

You’re more likely to see them at low tide because rocks are exposed, allowing the sandpipers to search for mussels, crustaceans, flies, and winkles: small sea snails. They always strike me as slow and methodical, thoughtful, even. While nearby sanderlings are chasing the retreating waves up and down the beach, the purple sandpiper sits on its rock, picking at food, seemingly unconcerned by the surrounding chaos of water. It even feeds at night.

Like so many shorebirds, they nest up north, in the tundra.

They lay three to four eggs in shallow scrapes surrounded by mosses and lichen. According to allaboutbirds.org, the nest is lined with “feathers, sedges, and leaves of willow, mountain avens, or arctic bell-heather.” Arctic bell-heather. Wow.

The eggs are an olive color, with darker brown smeared spots, and they blend quite well.

But even though their nests are so well camouflaged, they’ve developed a nifty nest distraction technique to confuse the arctic fox and others. Should a predator approach, Mr. Matthiessen, again in “Wind Birds,” explains that “the purple sandpiper, acknowledged master of the rodent-runners, jumps into view a few feet from the nest and zigzags away, low and humped over, wing tips dropped in a simulation of hind legs, feathers fluffed like fur, and squeaking like a mammal.”

Perhaps their stealth enables them to live as long as they do: up to 20 years. This got me thinking. If they live to 20, maybe I could see that purple sandpiper I missed in 2005. It could still be alive!

So, this week, I drove out to Montauk Point, thinking I could correct history. Just like 2005, there was a group of earnest birders staring out into the January ocean. And just like 2005, I failed to see a purple sandpiper.

Funny thing is, while I remember my initial failure at seeing a “purp,” I don’t remember when I saw my first. Birders usually remember their first time encountering a bird. It’s such a special event that it is given a name, a “life bird.” Some people even do a dance.

I sent Hugh an email to see if he remembered his first purple sandpiper. He did. “I was on a trip to Rye Playland Lake with the Linnaean Society and I was astounded when the leaders picked up this life bird sitting camouflaged on the offshore rocks. This was a place I had never considered as habitat before that moment.”

He continued, and I realized his next sentence answered the question my wife had asked me about profiling this bird. He said, “I was thrilled to see a bird that I barely knew existed.”

So, I guess that’s what I wanted to accomplish here. I wanted to introduce you to a bird you probably didn’t know exists, right at the end of that jetty you’ve walked by countless times.

Look for it this winter. It’ll be brown and white.

Bird sightings, questions, and matters of interest can be emailed to Christopher Gangemi at [email protected].