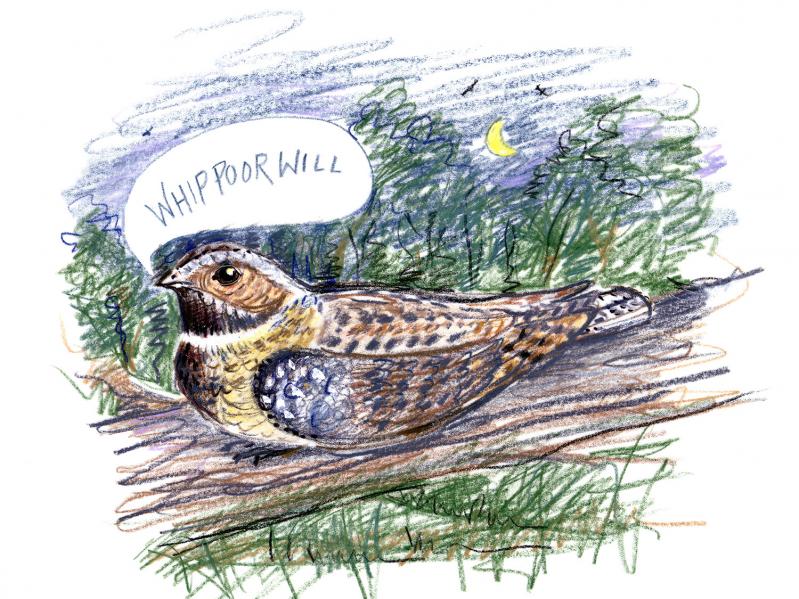 Whip-poor-wills are hard to spot, but their song is easy to distinguish.
Durell Godfrey
By Christopher Gangemi

I have never seen a whip-poor-will well. These robin-size birds are nocturnal and spend their days roosting among leaf litter, or along a horizontal tree limb. Their camouflage makes them invisible. They’re night-colored, branch-colored masters of stillness. You could walk right by one, never knowing its eyes were slit open just slightly, watching you pass.

I have seen shadows, things that looked like stones on the side of the road, maybe brief low-light silhouettes against a darkening sky, that could have been whip-poor-wills. But to describe the bird in these conditions is more like describing the moment daylight becomes darkness; they’re nearly imperceptible, fleeting for sure.

Look at the base of an old oak tree, flaky and grayish brown. Perhaps a flake or two has chipped off, exposing some warmer wood color inside — that’s what the feathers of a whip-poor-will would look like if you could see them.

The song, however, is not subtle at all. It’s big, repetitive, and unmistakable. The whip-poor-will is a so-called “name sayer,” like a chickadee, peewee, or bobwhite; it repeats its name over and over. It will stay with you forever if you are lucky enough to hear it.

John Burroughs, the American naturalist and essayist, counted a single whip-poor-will call 1,088 times in a row. It then paused for 30 seconds before calling another 390 times. Once I camped at the Hither Hills campground in the spring. Waking up to pee at 3 a.m., I was greeted with a calling whip-poor-will, which called until I fell back to sleep.

Better than counting sheep? I don’t know. I didn’t count.

When they first get to their breeding grounds, in May, they sing most insistently, but even in early July, you’ll be able to hear them. Your best shot locally is at the head of the Promised Land trail in Napeague State Park. They like pine woods or any woods that don’t have dense understory with nearby open areas for foraging. They lay their eggs directly on the ground — no nest! — relying totally on their cryptic colorings to fool predators.

The scientific name of the whip-poor-will, Antrostomus vociferus, is spot-on. According to “Birds of America,” edited by T. Gilbert Pearson, “the first word . . . means ‘cave mouth’ and the second . . . ‘strong voice.’ ”

Cave mouth. This bird eats only insects. At dusk and dawn it flies slowly, with its large mouth open, sucking up large moths (their favorite) and beetles like a miniature drone vacuum. According to allaboutbirds.org, whip-poor-wills may locate insects by seeing their silhouettes against the sky. Their eyes are adapted to low-light conditions. Once it gets too dark, they stop foraging for the night.

More amazing still, however, “they lay their eggs in phase with the lunar cycle, so that they hatch on average 10 days before a full moon,” the website says. “When the moon is near full, the adults can forage the entire night and capture large quantities of insects to feed to their nestlings. . . . They fly slowly and silently, often wheeling around 180 degrees in between wing flaps.”

We still live in a world where invisible birds time the birth of their babies to the sequence of the moon and then fly by its light, sucking down fluttering night-flying insects. It sounds magical, like a place I want to be. Why are we hell-bent on destroying it?

Ostensibly, this is a column about birds, but it strikes me that just as often I’m writing about things we’ve lost. In 1942, according to John Bull’s “Birds of New York State,” when the ornithologist W. Todd Helmuth surveyed breeding areas of the Eastern whip-poor-will, he counted 50 birds between Mecox and Montauk. Today, you might hear one-tenth that number, and to my knowledge you’d only hear them at Promised Land and Hither Woods.

I don’t want to complain; I want to appreciate. More than anything, I want others to appreciate. My big hope has always been that by highlighting some of the birds that surround us, and encouraging people to go out and see them, perhaps they’d quit overlandscaping. They’d quit removing their trees, and they’d quit trying to mash nature into some fashionable aesthetic, some brand of living they wish to represent.

Plant native trees, especially oaks. According to Doug Tallamy, the author of the essential “Bringing Nature Home,” they host over 900 species of caterpillar, many of which develop into moths. Stop spraying pesticides, even if they’re “organic.” They kill good and bad insects alike.

The collateral damage is just too high. It’s the loss of the habitat and food sources that sustain birds.

Brandon Keim summed it up nicely in a 2018 article in Anthropocene magazine: “Whip-poor-wills are suffering because there seem to be a lot fewer big bugs than there used to be.”

The first line of the Hank Williams song “I’m So Lonesome I Could Cry” references a lonesome whip-poor-will. In 1949, he wasn’t saying the whip-poor-will was lonely, he was projecting. He was lonely. By the time Yo La Tengo covered the tune, in 2015, the population of the whip-poor-will had declined by 70 percent, and it was, in fact, getting sorta lonesome.

It’s Fourth of July weekend. As an alternative to fireworks and crowds, I suggest you go to the Promised Land trail in Napeague State Park after sunset. Listen for the whip-poor-will. Hear for yourself what we’re losing, before it’s gone.

Mashashimuet Park's History and Future
A Conference for Young People to Create Solutions
Get Outside, Get Moving
END_OF_DOCUMENT_TOKEN_TO_BE_REPLACED