These seabirds can dive to spectacular depths 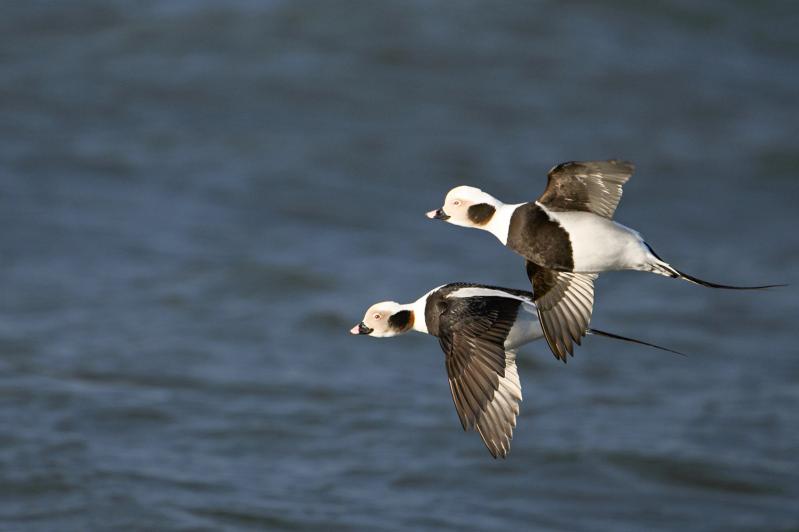 A little over 20 years ago, the American Ornithologists’ Union changed its name from “oldsquaw,” deemed racist even in those less “woke” times, to its current name, “to conform to English usage in other parts of the world.”

They arrive in mid to late-November, roughly when the Lions Club puts its Christmas trees out for sale on Long Wharf in Sag Harbor. They stay until ospreys start taking up residence, in early spring. All winter, they’re usually only a clam shell’s toss from most docks that jut into our empty winter bays.

Winter birds aren’t as heralded as those of the spring, but I look forward to their arrival. They tell me to slow down. Nights get long, fires flare, we break the puzzles out from the basement. Fewer social events; more family time. Bay ducks replace megayachts. Yes, please.

On a windless day when the bay is a silver sheet of glass, they stand out in their nonbreeding plumage. The long and wispy black tail feathers, after which they are named, are an obvious field mark.  Their heads are all white with a large black cheek patch and gray face. Their small bills are pink. Down their dark backs they wear gray capes. They’re a punk bird, with plumage full of contrasts.

They’re social and fun to watch. At Long Wharf in Sag Harbor, a place I frequent, I watched last week as they seemed to signal the presence of a seal.

The seal would dive and then rise toward the water’s surface. As he swirled below, hundreds of tiny fish exited the water, jumping skyward, literally for their lives. The ducks lifted their heads and watched from a safe distance. (Kind of how you might act if you were walking down the street and saw a murderer, some distance off. You might stop, hope the murderer didn’t see you, and then hide somewhere.)

A brave duck couple flew low over the seal in one direction, turned, and then flew back, making an invisible X in the air over the spot where the seal hunted.

Moments later, all the ducks were on the other side of the wharf, away from the seal.

As it turns out, seals do, in fact, eat long-tailed ducks. But humans don’t. Unless they really, really, need to. In fact, if the long-tailed duck is famous for anything, it might be how terrible it tastes.

According to Mica Marder, a man who knows his sea ducks so well that he named his son Eider, long-tailed ducks are “not high on the list of table fare. I mean, you could eat one,” he said, “but nowadays they sell chickens in the store. It wouldn’t be your first choice.”

When I asked him what they taste like he was thoughtful and then listed several adjectives not usually used to describe enjoyable food. He then relayed an old recipe for long-tailed duck that won’t show up in any Hamptons cookbook.

“You put the duck in a pan with some onions, garlic salt and a nice clay brick. You cook it for 24 hours. Then you throw out the duck and eat the brick. That’s the old saying,” he said, deadpanning.

So, while the population is in

“steep decline” according to the

Cornell Ornithology Lab website allaboutbirds.com, it’s not due to hunters shooting them for food. One source of population decline for the long-tailed duck is relatively measurable: gill nets.

The smell of a gill net loaded with fish draws sea ducks, including the long-tailed duck. Unfortunately, when they dive for those fish, they also get caught in the net, an invisible wall suspended in the sea. These nets capture an estimated 400,000 birds per year. Conservatively.

Gill nets have been a problem for the long-tailed duck for at least 130 years. Sigh.

Long-tailed ducks may be particularly susceptible to death by gill net because of their spectacularly deep dives of up to 200 feet. In fact, when foraging for crabs, mussels, and small fish, these ducks spend up to four times as long underwater as on the surface. To propel themselves, they not only use their feet, like other ducks, but their wings as well. These superhero ducks fly underwater.

Watch them dive with your kids, and then guess where they’re going to pop up next.

If you want to see a long-tailed duck in the spring, you could try the Beaufort Sea, just south of the Arctic Ocean. Perhaps a million gather there before dispersing to breed on islands or peninsulas in pristine arctic lakes. At night, the males fly offshore and congregate in areas with extensive sea ice. Imagine a night out on some frozen sea with thousands of long-tailed ducks.

Since they congregate so thickly, their population would also be highly susceptible to an oil spill in the Arctic region.

Transitioning to another harsh environment, the dentist’s office, where I find myself twice a year, I noticed a painting on the wall of long-tailed ducks. I don’t like going to the dentist, but because Dr. French has a painting of long-tailed ducks flying over the Shelter Island Sound, I’m better able to tolerate keeping my teeth healthy. I always find that picture transportive, even if it only sends me a few miles away.

We make a big deal about the snowy owl, and people travel to Iceland to see puffins. No doubt, both are special birds. But if you’re on a travel budget or staying away from the airlines during Covid, drive over to Long Wharf in Sag Harbor and take a good close look at the long-tailed duck.

Like me, you may find them transportive. They’re here until April, just waiting to be properly appreciated.