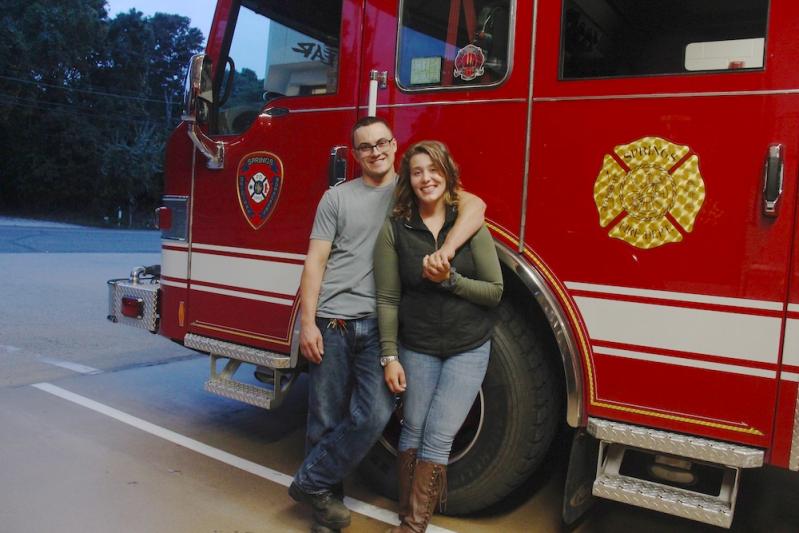 Habitat for Humanity of Suffolk will gather over 30 executives from Long Island companies on Monday to raise the walls of a new affordable house on Hartley Boulevard in Springs that their companies helped to fund through Habitat Suffolk's CEO Build and Blitz Build programs.

The homeowners selected from among more than 30 applicants across the county will be Anthony LaFountain and Cheyenne Banville, volunteer first responders with the Springs Fire Department. Mr. LaFountain and Ms. Banville live in Springs and work in East Hampton.

"Communities such as East Hampton depend on first responders and service workers to function and thrive," Mr. Silberman said. And yet many fire departments "are losing young volunteer members because we cannot afford the cost of living on the Island," Mr. LaFountain said in a release. The couple is not only benefiting from this effort, but have made the commitment to volunteer with Habitat themselves.

Designed by Jack Rosebery of Rosebery Architectural Studio, the 1,800-square-foot one-story house features four bedrooms, one bathroom, a basement, and garage. Ray Harden and Stratton Schellinger, principals in the East Hampton firm Ben Krupinski Builder, are donating the company's time and skill to oversee the project. It is expected to be finished in time for Mr. LaFountain and Ms. Banville to celebrate Thanksgiving in their new home.

Ben Krupinski Builder has worked with more than a dozen other companies to secure time and materials for the Springs house. "From top to bottom, all of us will have spent nearly 1,000 hours" on it, according to Mr. Harden.

Habitat Suffolk houses are appraised independently and sold at market value, but to make them more affordable, Habitat holds a second mortgage covering the difference between the new homeowners' affordable mortgage and the appraised value of the house. The recipients of the houses make no payments on the second mortgage "unless the home is sold or rented," according to Habitat for Humanity of Suffolk. Applicants for Habitat houses must meet income, credit, and savings qualifications to show "they would be responsible homeowners," according to the organization. The goal is for the new homeowners to spend no more than a third of their income on mortgage, taxes, and homeowners insurance, with that made possible through "grants, donations, and beneficial loan terms."
Habitat for Humanity of Suffolk hopes to work with East Hampton Town on future projects, Mr. Silberman said.