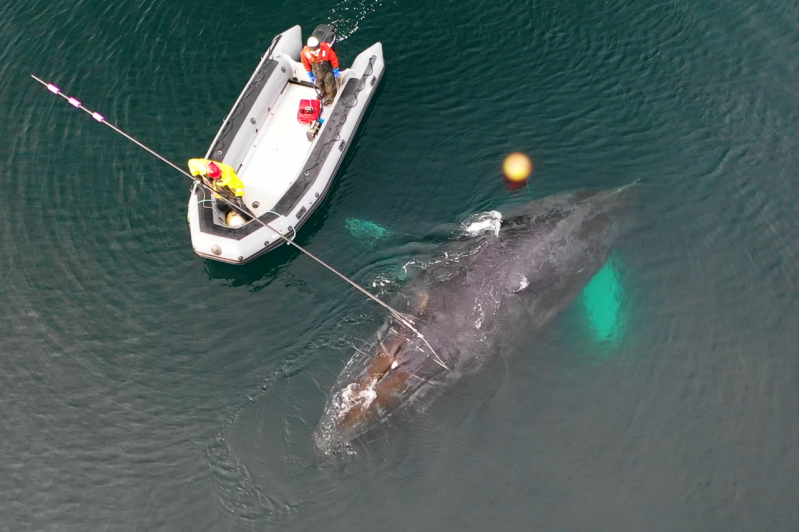 A series of recent humpback whale strandings on the East End are evidence of another year of high mortality rates for the species along the Atlantic Coast and particularly in New York, according to the National Oceanic and Atmospheric Administration Fisheries.

"Last year, there were 26 humpback strandings along the Atlantic Coast for the whole year, and we're at 19 already this year," said Ainsley Smith, a regional stranding coordinator at NOAA.

Humpbacks have been experiencing unexpected deaths, known as unusual mortality events, since 2016. For every ensuing year except for one, more strandings have occurred in New York than in any other state on the coast.

The corpse of a nearly 34-foot-long subadult female washed ashore at Atlantic Avenue Beach in Amagansett on May 31. A necropsy performed by the Atlantic Marine Conservation Society (AMSEAS), the state's lead large-whale response organization, found that the whale "had a decent layer of blubber and food in its stomach" but "some suspect bruising." A pathology study of tissue samples is being done to determine if there is evidence of trauma.

At the time, that was the fourth large whale stranding that AMSEAS had responded to in the state this year. On March 31, a dead humpback whale washed ashore at Jacob Riis Park in Queens. A minke whale stranded alive in Oyster Bay on May 16 was found to be so "significantly underweight" and in poor health that it had to be euthanized. And on May 22, a dead humpback whale was found one mile off Westhampton Beach.

This month, two more deceased humpbacks were discovered on Long Island. One was found four and a half miles off Montauk on July 17, and, the following day, another washed ashore in Smith Point County Park in Shirley.

The main threats to humpbacks, according to NOAA, are vessel strikes, entanglement in fishing gear such as gill nets, and the stress induced from whale watching tours and other "vessel-based harassment."

NOAA has been unable to pinpoint a reason why New York tends to be more deadly for the animals, said Ms. Smith, but Robert DiGiovanni, the founder of AMSEAS, said the combination of having an ample amount of menhaden (a favorite humpback food) in the water, and an increasing number of vessels on it, is one likely reason. "You've got all the elements," he said of the East End, and given the number of people opting for outdoor activities because of the pandemic, the number of boaters might be even greater than usual this summer.

Humpbacks are drawn to the area because of the food, and then get struck by unsuspecting boaters. Vessels of any size can cause injuries ranging from ruptured organs to propeller cuts. "Most New Yorkers are not aware there are whales in the area, so boaters think 'It's an open road,' " he said. His organization has launched a campaign to raise awareness of their presence. He wants boaters to approach driving on the water with the same care they would take if they were navigating a car in an area with a lot of deer, he said.

NOAA's guidelines for those who encounter wildlife while at sea say that "all boats, Jet Skis, paddleboards, kayaks, and other watercraft" should remain at least 100 yards from large whales, and 50 yards from dolphins, porpoises, seals, sea lions, and sea turtles. Excessive speed or sudden changes in speed or direction near whales, dolphins, or porpoises, should be avoided, it says.

The AMSEAS staff has responded to more than 100 strandings of marine mammals and sea turtles so far this year, said Mr. DiGiovanni, but the pandemic has slowed the organization's efforts to sight whales. Humpbacks, which had been on the federal government's endangered species list up until September 2016, have been far more plentiful in recent years, he said, so there's a chance the increase in mortalities is proportional to their abundance. "You hope there are more out there," he said.

The state's stranding hotline, which should be used to report both living and deceased whales, dolphins, seals, and sea turtles, is 631-369-9829. Sighting alerts can be sent to [email protected].