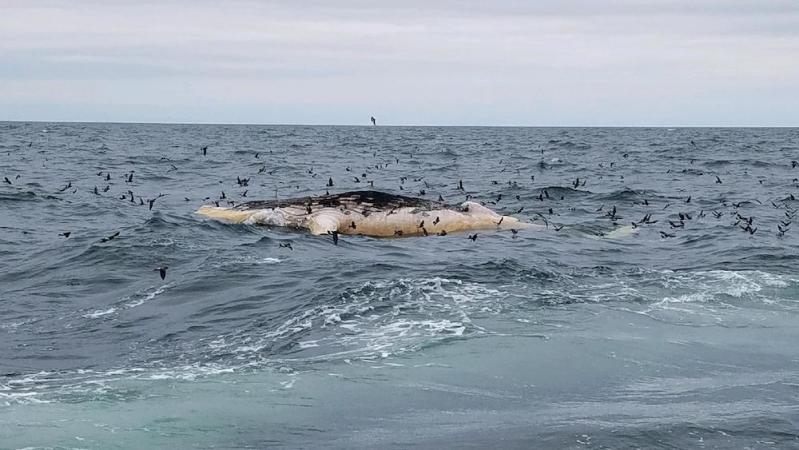 A humpback whale found off Montauk is too decomposed to warrant a necropsy, according to the Atlantic Marine Conservation Society.
Rob DiGiovanni/AMSEAS
By Carissa Katz

A dead humpback whale spotted off Montauk Friday morning was about four and half miles from shore by the afternoon, but due to ocean conditions, its location, and the fact that it was already "fairly decomposed," the Atlantic Marine Conservation Society and state, local, and federal officials decided not to tow it to shore for a necropsy.

A team including the Coast Guard, which first reported the whale, AMSEAS, the New York State Department of Environmental Conservation, National Oceanic and Atmospheric Administration Fisheries, and the Town of East Hampton determined that "the best course of action is to place a location tag on the carcass and track its movement," Rachel Bosworth of the marine conservation society wrote on Friday afternoon.

Towing it to shore would have been "a lengthy and difficult process," Ms. Bosworth wrote.

This is the sixth large whale stranding in the state this year and the fourth humpback whale to be stranded, according to AMSEAS, the state's lead large-whale response organization. Humpbacks have been experiencing what are referred to as unusual mortality events along the Atlantic Coast since 2016. A dead 35-foot female humpback washed ashore near Atlantic Avenue Beach in Amagansett on May 31, and a 32-foot male washed up near Cupsogue County Park in Westhampton Beach on May 23.

The marine conservation society has urged boaters to be on the lookout for marine animals and to report sightings of this humpback and any other dead, distressed, or stranded marine animals to the New York State stranding hotline at 631-369-9829.