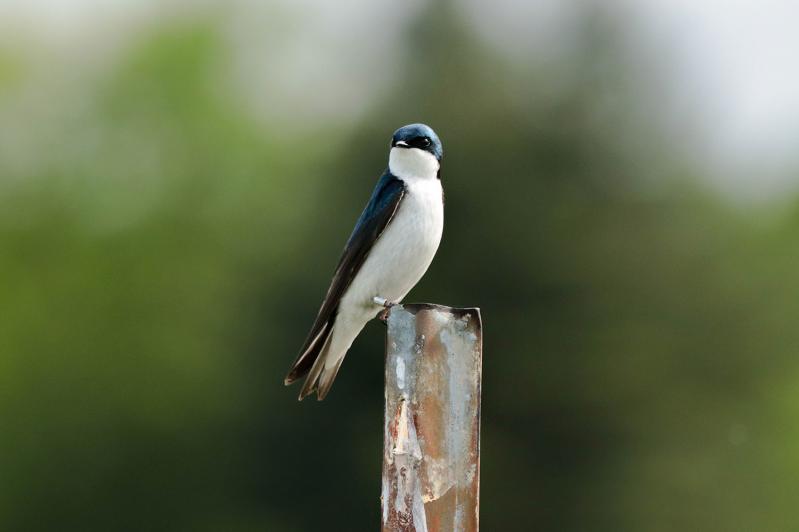 A large group of tree swallows is called a gulp, which proves ornithologists are not without humor.

And so, before the leaves change, gulps of swallows crowd our beaches. It’s difficult to estimate the exact number, but at Mecox Inlet, Sagaponack Pond, and the dunes that circle Napeague Harbor, hundreds, and sometimes thousands, of tree swallows collect.

Directly north of East Hampton, across the sound in Old Lyme, Conn., up to half a million of these swallows roost in reed beds. YouTube it. Sunset tree swallow cruises are fully booked for 2022, but now you know what do after Labor Day in 2023.

The gulps clump. One of my earliest East End memories is a beach fence at Mecox completely overcome by tree swallows. On every bare span of wire linking the wooden slats, a tree swallow sat. In the Napeague Walking Dunes, they fully burdened a dead snag overhanging the dunes. In a North Haven marsh, they perched wing to wing on the few trees that rose out of the grasses, until it seemed they should sink.

So that’s one way to enjoy this bird: in autumn masses as it migrates south. To a tree swallow, our barrier beaches must feel like a precipice. They look out on the Atlantic and somehow fly off over it. Eventually they end up in Florida for the winter, or they hug the Gulf Coast and migrate to Central America. Very few linger north for the winter. In the absence of winged insects, those that do feast largely on bayberries. Plant some.

Another way to enjoy tree swallows is in the spring when they return here to nest. They’re the East End’s earliest arriving swallows. In late March they start taking up residence at nesting boxes at Poxabogue County Park, the South Fork Natural History Museum, and at the East Hampton Town Airport, sometimes competing with the eastern bluebird. They like to set up house on the edge of a woodland, especially one that is close to an open area, like a field, or a pond.

They’re slightly smaller than most sparrows and generally eat only winged insects. According to allaboutbirds.org, “their prey may be smaller than a grain of sand or up to two inches long.” Watching them hunt in search of these winged grains of sand, looping and coasting over a field or a pond, you can get lost, in a good way. Try following a single bird when they’re in a group. I promise you’ll forget about whatever ails you, if only for a few seconds.

“It’s hard to know exactly what they’re eating,” said Jennifer Uehling, a Ph.D. candidate in the department of ecology and evolutionary biology at Cornell University. “When we catch them, they often poop on us.” Those feces don’t go to waste; Ms. Uehling uses them to figure out what tree swallows eat by analyzing the DNA. “There’s a large variation in the foods they eat. I’ve heard them described as aerial planktivores, they fly around with their mouths open catching whatever is available to them,” she said.

“They’re also eating mosquitoes. Lots of mosquitoes,” she said. Better than any pesticide.

Tree swallows are striking. They enhance the abundant light of summer with glints of blue and green that reflect from their metallic backs. Their bright white breasts gleam. They wear a little black mask, which matches the black tips of their iridescent wings.

“Having held them up close, their plumage never ceases to inspire me,” said Ms. Uehling.

The tree swallow is a dynamic flier. Right angle turns, midair stops and starts, flowing soars, are all possible in the span of just a few seconds. They’re seemingly feeding on the air itself. They’re often low, sometimes veering from an observer at the last moment. Playing swallow?

The word “tree” is in their name because before trees were considered dirty, inconvenient, diseased, or in the way of a pond view, they nested in them, in cavities made by woodpeckers.

A quick note in support of dead trees and their limbs: Challenge yourself to change your perspective. Note their gray beauty. Let them decline, fall, and then melt into the ground, perhaps first becoming a landscape of mushrooms or a warren for insects. Then, marvel at all that dead branch accomplished. Listen to your landscaper or “tree guy” with a healthy dose of skepticism.

Go to Long Wharf in Sag Harbor. Look toward North Haven. Against all the living trees, a hulking dead tree stands on the beach, a ghost on the shore. It’s amazing.

Anyway, inside the nesting box or tree cavity, the female swallow weaves strands of grass into a nest. Then, when she’s getting closer to laying her eggs, the male, who will help her raise the young, brings feathers to line the “cup” of the nest. While carrying the feathers nestward the male will sometimes play catch, dropping the feather and then recapturing it on the wing.

“It could be some sort of signaling to the female,” said Ms. Uehling, “but we don’t know exactly why they’re tossing feathers around. Sometimes we open up a bird box to inspect a nest and it looks like the inside of a pillow in there.”

In the spring you can also listen to their song, a burble, the sound of liquid dropping into liquid. It’s not a melodic or conventionally pretty song, but there’s a softness to it.

Leave your dog and iPhone home and go sit near one of our ocean ponds around sunset in September. If you’re lucky, you’ll find yourself surrounded by swallows and thus, get a hint of what grace must feel like.