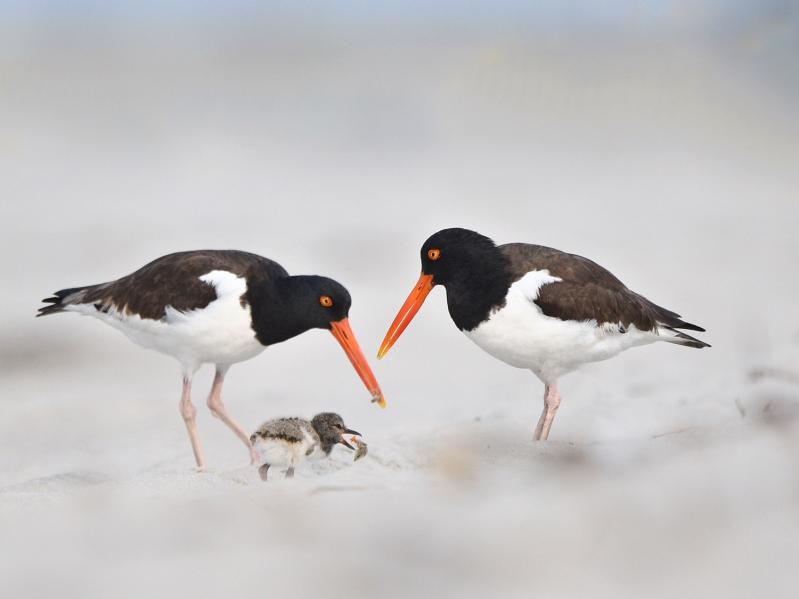 American oystercatchers need space at the beach to care for their young. For two months, both parents feed their tiny chicks.
Jay Rand
By Christopher Gangemi

In May, the United States Fish and Wildlife Service reported 57 American oystercatcher eggs stolen from nests in the Rockaway section of Queens. At Shinnecock County Park unleashed dogs destroyed a piping plover nest. American oystercatchers share habitat with the plover and, in theory, benefit from their protections.

However, a symbolic fence is no match for real human ignorance.

I can almost forgive the piping plover deniers — those who believe beach closures are a governmental conspiracy and that plovers are plentiful (they’re often confused with the much more common sanderling). These people may not know what the word camouflage means.

But American oystercatchers stand out. If you disturb them, you’re doing so willfully; they can’t be missed and they’re not quiet.

The American oystercatcher is about the size of a crow, and stout, with a heavy white belly, chocolate-colored wings, and pale pinkish legs. It wears a black executioner’s hood. It has a long blood-orange oyster knife of a bill with yellow eyes circled by red eye rings. Very cool.

World Shorebird’s Day was Sept. 6, and I took a walk. On a beach strewn with empty whelk, mussel, and clam shells, with a north wind blowing between gray clouds and a grayer Sag Harbor Bay, I found two American oystercatchers, one adult, one juvenile. They hunted on a spit of sand that extended 100 feet into a salt marsh.

Finding the oystercatchers was not surprising; the habitat was perfect. They’re dependent on saltwater marshes for their food, which is why you won’t find them inland. Their range is purely coastal. They could be a point of pride for Long Island, like lighthouses, whales, ospreys, and strip malls.

They feed at low tide. As the water retreats, beds of mussels and oysters are exposed. Oystercatchers also probe the wet sand for clams. Because it has a knife on its face, it makes quick work of such bivalves.

Well, not always. According to allaboutbirds.org, “Occasionally, a shellfish gets its revenge by clamping down on an oystercatcher’s bill and holding the bird tight. When the tide comes

back in, it can spell bad news for the would-be predator.”

That didn’t happen to my oystercatchers. They stepped along the sand, sticking close to the marsh grass. One turned in and came out holding a mussel, which it quickly dropped on the sand. It worked the seam of the shell, slipped the tip of its bill inside, and popped it open.

Behind the oystercatchers, egrets slowly marched, heads still. An explosion of tree swallows, which seemed to emanate from a single point in the sky, broke the scene into 40 pieces. I followed them as they flew over the marsh and in front of some new ascending manse, before getting distracted by roofers making a din with their equipment.

The oystercatchers left the marsh, alerting me to their flight with a breezy “whew” call.

I turned and watched as they flew toward Barcelona Neck. Their big white wing stripes blended in with the stormy whitecaps on the bay. Autumn was close, but these birds hang around for the “second summer.” In fact, this is the time of year they congregate in the marshes of our barrier beaches, before flying south to winter from Maryland to the Caribbean.Lazy Point. Louse Point. If you want to see a bunch, head to Cupsogue County Park. One August, I counted 31 there, but that’s not impressive. Hundreds gather in the marsh there.

Shelby Casas, a coastal program associate for the National Audubon Society, says these staging groups are a mixture of birds who bred nearby and migrants who have moved south to Long Island from their nesting sites farther north.

She monitors breeding sites of plovers and oystercatchers. The distribution data she collects helps Audubon understand which habitats need protection.

Like the piping plover or the least tern, oystercatchers lay their eggs in a tiny scrape in the sand. Their nests and chicks are camouflaged and are nearly impossible to spot. For two months, both parents feed their young. They need space during this window, but we humans are always getting closer.

Ms. Casas spends her summer weekends behind a table at beaches where these birds nest, educating people. People sign a Be a Good Egg pledge and get a little sticker. They’re asked simply to be considerate, leash their dogs, respect the symbolic fencing, pick up trash, and follow signs.

We can’t do much to protect these birds from natural predators, storms, or rising seas. “The thing we can control is how the public interacts with the birds,” said Ms. Casas. “That is a threat we can work towards reducing.”

“What a great resource,” she said of the oystercatcher. “These are birds we can find on our local beaches.”

I appreciated her optimism but was simultaneously bummed out that people need a sticker and a pat on the head to simply behave. The U.S. Fish and Wildlife Service is still investigating the springtime nest destruction. Perhaps cameras at nesting sites will better encourage people to share the shore.

Fall migration is in full swing. Sheri Lagin found a brown pelican on the waters of Amagansett, just across from Gardiner Drive, on Labor Day weekend. Stay aware, and send any interesting sightings to [email protected].