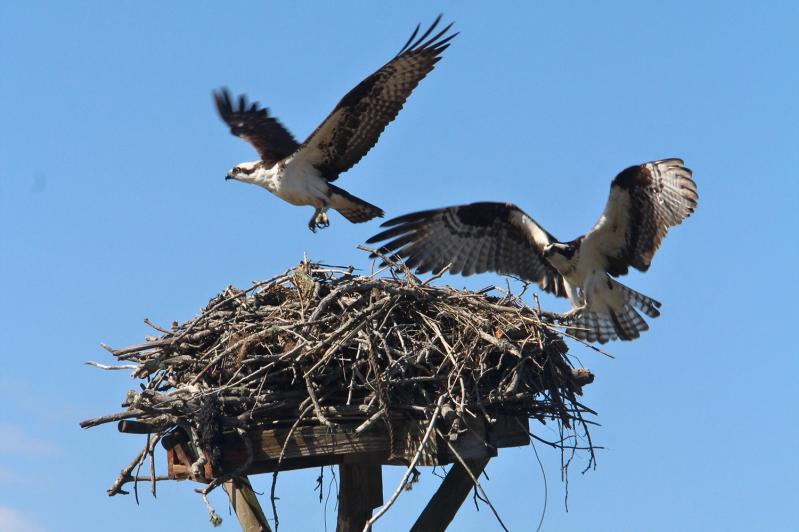 The male osprey gathers the nesting material, and the female places it.
Durell Godfrey
By Christopher Gangemi

The craziest osprey story I know comes from my friend, collaborator, and wildlife rescuer Keith Douglas. He was once called to a Bridgehampton manse with multiple chimneys, each sprouting pointed lighting rods. On one of those rods, an osprey had impaled its wing. Imagine being nailed to the top of a house through your palm. That was the osprey’s predicament. Mr. Douglas, in high winds, managed to get onto the roof, cling to a chimney, and, with a long pole, slowly slide the osprey up the rod to freedom. The osprey didn’t immediately flee but took one hover flap, and gave Mr. Douglas a last look, before pushing off into the sky.

It remains one of the most amazing wildlife videos I’ve seen.

In the last two weeks, ospreys have started to return to the East End from their wintering grounds in Central and South America. They’re a sign of spring, and a constant visual reminder that our actions directly affect birds. Our use of pesticides brought them to the brink; their rebound only came after DDT was banned in 1972. According to the North American Breeding Bird Survey, the osprey, which lost 90 percent of its population between 1950 and 1970, has since gained back 2.5 percent a year.

Old-timers might call ospreys “fish hawks,” but they differ from hawks in at least two important ways that allow them to capture and eat live fish, which comprise 99 percent of their diet. They have “spicules” — think aggressive sandpaper — all over their talons. Also, according to allaboutbirds.org, they have a “reversible outer toe that allows them to grasp with two toes in front and two behind.”

The same website also offers up a couple of interesting facts. Ospreys catch a fish on one in every four dives and their average hunt time before making a catch was 12 minutes. Take that, Jon Diat! (Mr. Diat writes our “On the Water” column about fishing.) They dive only about three feet below the water’s surface. Captured fish normally measure 6 to 13 inches and weigh one to two-thirds of a pound.

You’ve probably observed an osprey capture a fish and then position its head forward, to reduce drag, as it flies back to its favorite perch, or nest, to devour its meal. Their nests are part of the landscape on the East End. Males gather nesting material, and the females arrange the nest. They return to the same nest year after year, adding sticks, making them deeper and wider. Modern osprey nests also contain a distressing amount of plastic. Baby ospreys can get tangled in fishing line, or balloon ribbons.

The Group for the East End shared this information with PSEG, our local power company, because ospreys “love their equipment,” said Jeremy Walsh, a spokesman. On electrical poles deemed “high risk” for nest building, PSEG has proactively installed “V guards” during the off-season, to discourage ospreys. Ospreys need a relatively flat and wide surface to build their nests. The V guards create a peak on which sticks cannot be easily placed. At the same time, to encourage the birds to build in safer spots, the utility has built about three dozen platform nests, said Lisanne Altmann, a member of the PSEG osprey team.

“Our objective is to make sure the ospreys are safe and that the power stays on,” she said.

PSEG’s osprey team has about 130 members and for many, “it’s become a real passion,” she said.

PSEG deserves applause. My hope is that the osprey could be the “sparkbird” that it needs to consider smaller birds. Each spring I’ve observed PSEG contractors “trim” trees that are close to wires. They move fast and indiscriminately. For more information on that, I was told I’d need to speak with a “vegetation management specialist.” Are smaller tree-nesting species less important just because they are hidden from our view? At the very least, they’re a more difficult public relations win.

But it’s these hidden birds, especially sparrows, warblers, blackbirds, and finches, that are really struggling now. They return each spring as well, less heralded, and in fewer numbers.

I often quote from John Bull’s book “Birds of New York State.” First published by the American Museum of Natural History in 1974, it acts as a bit of a time capsule. It gives us a hint of the way things were for birds, back in the good old days. Since its publication, the world has lost about three billion birds, or roughly 25 percent of the total population. That’s disquieting.

Pesticides nearly doomed the osprey. When we spray for ticks, we’re killing countless other insects too, insects that are necessary food for birds fledging from May through July. I urge you this spring when you’re enjoying the ospreys, to think of the hidden birds, and what they need. Food, and places to nest. Your actions make a difference.