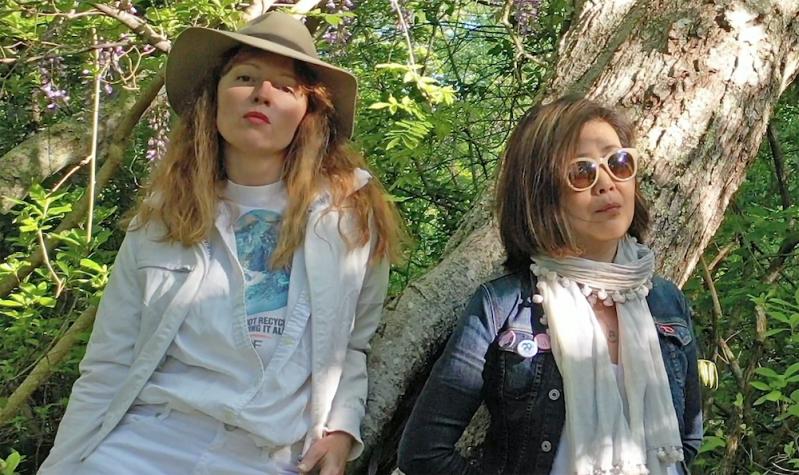 Angela Witte and Yuka Silvera at the Nature Trail in East Hampton, as depicted in Dell Cullum's video for their recording of Paul McCartney's song "Wild Life."
Dell Cullum
By Christopher Walsh

A musical project that came to life last summer will make its broadcast debut this morning, days after coming to the attention of the song’s composer, who happens to have been in the Beatles.

In August, Yuka Silvera, an East Hampton resident and hobbyist musician who spent much of last year gathering signatures on a petition asking the East Hampton Town Board to enact a one-weekend-day ban on hunting during hunting season, assembled a band to record “Wild Life,” Paul McCartney’s 1971 plea for animal rights, at the Grammy Award-winning producer Cynthia Daniels’s MonkMusic Studios, also in East Hampton.

A member of the East Hampton Group for Wildlife, Ms. Silvera had told the board that she and her family in Northwest Woods are routinely awakened at 5 a.m. by the sound of gunshots during hunting season. People are afraid to walk in the woods, particularly with their children and pets, when hunters are active, she and other residents said.

The Lightworkers — Ms. Silvera; Angela Witte, a Springs artist; Dianne K. LeVerrier, an East Hampton attorney, and Bob Golden, a musician who lives in Springs — were disappointed by the town board’s cool reception to Ms. Silvera’s request and pondered how to call attention to animal rights by other means. Ms. Daniels, also an animal lover, was eager to work with the group.

The group and Ms. Daniels, who produced the recording, were pleased with the results, but the project sat dormant through the winter as the shotgun hunting season proceeded.

Recently, Dell Cullum, a photographer and wildlife removal specialist who founded the not-for-profit Wildlife Rescue of East Hampton, learned of the recording and wanted to film a video for the song. The players are featured at the Nature Trail in East Hampton Village in the video, but nonhumans are the focus: The eyes of mammals, birds, and more gaze into Mr. Cullum’s camera, interspersed with statistics about the precipitous decline of wildlife populations over the last 50 years. The video has scenes specific to East Hampton, with graphic depictions of deer caught in fencing or, having been struck by a vehicle, dead on the roadside.

Mr. McCartney, who owns a house in Amagansett, and his wife, Nancy, “saw my video and gave us permission” to use it to benefit wildlife, Mr. Cullum, who grew up in that hamlet, said this week.

With its composer’s endorsement, the Lightworkers’ recording of “Wild Life” will premiere this morning at 10 on WLIW, 88.3 FM. Ms. Silvera, Ms. Daniels, and Mr. Cullum will discuss the project with Gianna Volpe, the program’s host.

Mr. Cullum’s video for the song will premiere on Saturday on YouTube, at bit.ly/38kvFFk. “I was honored to participate because the message was strong in the song and I had the perfect vision to accompany that message,” he said this week. “I knew how to express it and knew it was time to do so. The band’s remarkable remake and the masterful recording by Cynthia Daniels created the absolute perfect canvas to work with.”

“After collecting more than 700 signatures on the petition, I was fed up with local politics,” Ms. Silvera said this week. “I may not go back to town board meetings anymore, but will keep fighting to bring awareness to the importance of living in harmony with wildlife through art. We are so grateful to Sir Paul McCartney for giving us his permission to use the song for the campaign.”

“It was important to me that I show my appreciation for their hard work,” Mr. Cullum said of the Lightworkers, “by creating an equally beautiful visual that moved them, like their results moved me, which together moved the McCartneys.”