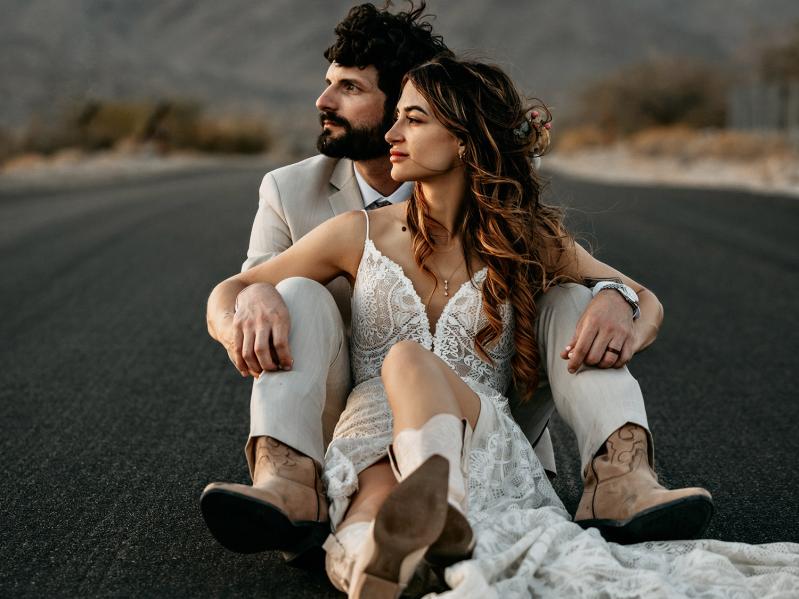 Evan Thomas Lightcap and Lauren Elizabeth Sanford of Cleveland were married on April 30 at the Penny Lane Ranch in Sky Valley, Calif.

Mr. Lightcap is a son of Grace and Edward Lightcap of Montauk. The bride’s mother, Lisa Ballard, lives in Cleveland. Her father and stepmother, Lloyd and Sandra Sanford, live in Rocky River, Ohio.

Caitlin Ruderman officiated at the ceremony.

Noah Ferris of Cleveland was the best man. The groomsmen were Mr. Lightcap’s brothers, Dustin Lightcap of Murfreesboro, Tenn., and Terence Lightcap of Montauk, and his friends Corey Richman of Mission Viejo, Calif., and Mike Hayes and Nick Beets of Irvine, Calif.

The bride wore a cream-colored long lace dress and cowboy boots and carried a bouquet of peach-colored roses and other flowers in desert colors with sage accents.

The bride’s sister Leigh Sanford of Cleveland was her matron of honor. Her bridesmaids were her sisters Kahla Joyce and Mackenzie Ballard, also of Cleveland, and her friends Lacey Buckelew and Kellie Dubock of Costa Mesa, Calif. They wore shades of peach and burnt siena.

The couple met through mutual friends.

The groom is a systems administrator at cloudkitchens.com. The bride is an aesthetician at Flawless Lashes and Skincare.

The couple honeymooned in St. Thomas in the United States Virgin Islands.

Mashashimuet Park's History and Future
A Conference for Young People to Create Solutions
Get Outside, Get Moving
END_OF_DOCUMENT_TOKEN_TO_BE_REPLACED