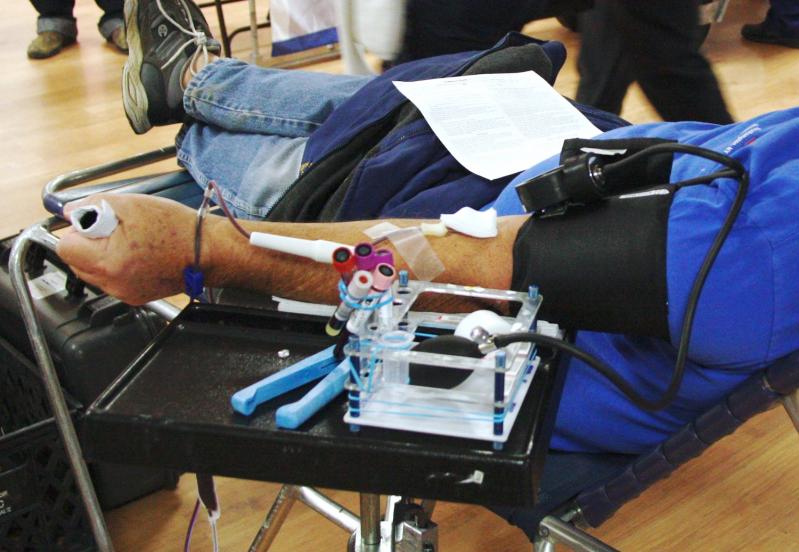 If you're going to donate blood, drink plenty of fluids the night before. Salty snacks will help you retain the fluid.
Durell Godfrey
By Christopher Gangemi

A month ago, the New York Blood Center announced its fifth blood emergency of 2022. Organizing drives and collecting blood donations has been more difficult during the pandemic, causing blood supply disruptions. Yet the demand for blood is stable and has even risen lately as routine surgeries, perhaps put off during the height of the pandemic, are scheduled.

“We need 30 to 32 thousand units per month, but we’re collecting between 28 and 31 thousand,” Andrea Cefarelli, the senior vice president of the blood center, said. “We like to have a five-to-seven-day supply.” A blood emergency is declared when one or more blood types are in the one-to-two-day range.

Blood drives held at large corporations were an effective collection strategy pre-Covid. During Covid, however, and even now, more workers split time between the office and home. “We may go to an organization and get half as many donations as in the past,” Ms. Cefarelli said.

“Covid changed the way blood drives are conducted,” said Carol Graff, the laboratory administrative director at Stony Brook Southampton Hospital. “We couldn’t rely on organization drives. We really had to start getting into the community.”

It may seem strange, but to a hospital, blood is a product. When blood is collected, it’s transported to a central bank in New York City where it’s separated into its components: red blood cells, platelets, and plasma. While it stays refrigerated for 42 days, it’s barcoded and generally out the door the next day.

“Blood is a pharmaceutical,” she said. “It’s a drug ordered based on what patients need. It does very specific things. A trauma patient may need it to replace fluids. Platelets for a cancer patient prevent internal bleeding.”

The Sag Harbor Fire Department hosts three drives a year and often sees repeat donors. “We run a drive every few months,” said Tom Gardella, the deputy mayor of Sag Harbor Village and liaison to the Fire Department. “Sag Harbor always does their part. We drew 130 pints at the October drive. That was a substantial number.”

“People think it’s going to take too long and that it will hurt,” said Melissa Hesler, the president of the Sag Harbor Volunteer Ambulance Corps. “Some people get lightheaded, but we’re equipped to deal with that. In 23 years of doing this, we’ve never had a serious problem.”

Depending on your size, your body holds eight to 12 pints of blood. While it usually takes less than 15 minutes to collect a unit of blood, equal to a pint of ice cream, the whole process can take up to an hour.

“You come in, we take your blood pressure, check your iron, and take your temperature. You fill out some paperwork, and we get you a seat. I’ve seen people pump out a pint in six minutes,” Ms. Hesler said.

The American Legion in Amagansett held a drive yesterday. Pattie Romanzi, an East Hampton mortgage broker who is B-positive, planned to donate. “My late husband, Angelo Ragone, died from leukemia. He needed red blood cells every week and platelets three times a week. I was never a big donor before he got sick. Now, I try to donate whenever I can. I always feel good afterwards,” she said.

Covid reduced the donor pool, especially among younger donors. “We had two years of loss for first-time and youth donors,” Ms. Cefarelli said. “High schools and colleges had remote learning. We used to collect 75,000 annual donations from high schools and colleges. That was 25 percent of the total and we have less than half those donors back.”

“There was always availability of blood somewhere in the country,” she said. “If Florida had a hurricane and needed blood, or couldn’t collect blood, there were 75 other blood centers in the country to share.” Because Covid hit the country as a whole, no region had a surplus.

To deal with an uncertain supply, Stony Brook Southampton Hospital diversified its blood vendors. In addition to the New York Blood Center, the hospital gets units from the American Red Cross. They’ve also taken matters into their own hands. Stony Brook University Hospital has its own blood center and collects donations from staff and the community. “Stony Brook was so helpful for us, especially when reserves were tight,” said Kim Del Carmen, the clinical laboratory supervisor for the blood bank at Stony Brook Southampton.

The hospital plans to hold its own drive in April, which will be open to the public. To donate one must be 16 years old and weigh at least 110 pounds.

“Your fluid volume is replaced in a matter of days,” Ms. Cefarelli said. “The red cells come back over a couple of weeks. You can give blood once every 56 days. Most people don’t give once in a lifetime.”