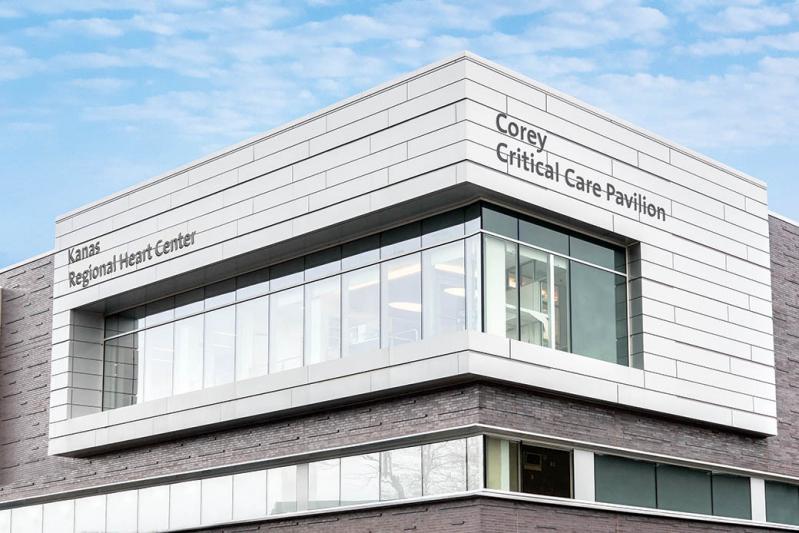 The Corey Critical Care Pavilion and Kanas Regional Heart Center in Riverhead was officially dedicated in a ceremony on Friday, following three years of construction.
Courtesy of Northwell
By Taylor K. Vecsey

Peconic Bay Medical Center in Riverhead celebrated the completion of its new $67.8 million facility on Friday.

The Corey Critical Care Pavilion and Kanas Regional Heart Center on Roa­noke Avenue at the hospital offers more lifesaving services on the East End, according to officials with Northwell Health, which Peconic Bay Medical Center joined in 2016.

The Corey Critical Care Pavilion, which took three years to build, includes a 16-bed intensive and cardiac care unit and a rooftop helipad allowing for easy transfers to other facilities. It is named in honor of Emilie Roy and Michael Corey, a Riverhead couple who were also behind the hospital’s palliative care program. They also recently made a $10 million gift to the hospital, the largest it has ever received from an individual. Ms. Corey is also the chairwoman of the hospital foundation’s board of directors.

The newly expanded Kanas Regional Heart Center has two cardiac catheterization laboratories, where heart stenosis and blockages are treated, an electrophysiology suite, where heart arrhythmias are diagnosed and treated, and recovery rooms. The John and Elaine Kanas Family Foundation gave a $5 million gift to Peconic Bay nearly three years ago. The Kanases have also made possible East End Hospice’s in-patient facility in Quiogue.

Interim catheterization labs, the hospital’s first, opened in 2017 and have been well used while the construction project was underway. Over approximately two years, nearly 2,000 patients were treated, including 85 with a severe form of a heart attack known as an ST-elevation myocardial infarction or STEMI.

The hospital works with Northwell Health Physician Partners’ cardiology practices in Hampton Bays, Riverhead, Southampton, and Wading River, as well as Peconic Bay Medical Group, to coordinate cardiac care for more than 250,000 patients. The hospital also has a cardiac rehabilitation program with the region’s largest staff of advanced cardiac life support-certified physical therapists and nurses, according to a statement from the hospital.

“We very much appreciate all our community members who supported our program and the Kanas Regional Heart Center, which will allow us to provide vitally important heart care for East End residents near where they live,” said Dr. Stanley Katz, the chairman of cardiology at Peconic Bay Medical Center. “When you are dealing with someone’s heart, every second matters and having these high-quality resources and top-notch services available to the East End has already proven to make a major impact on our community.”

For patients who need a more complex level of cardiac care, the hospital works with what the hospital said is a renowned cardiothoracic team at Southside Heart and Lung in Bay Shore. Northwell’s SkyHealth helicopter, which can now land on the rooftop helipad, can quickly transport patients from Riverhead to Bay Shore once they have been stabilized.

The Corey Critical Care Pavilion also has space to expand the hospital’s emergency department, which treated more than 38,000 patients in 2019.

The donations from the Corey and Kanas families were part of a 2015 capital campaign to raise $28 million. More than $33 million has been raised so far, including nearly $600,000 donated by the almost 1,000 Peconic Bay Medical Center employees.