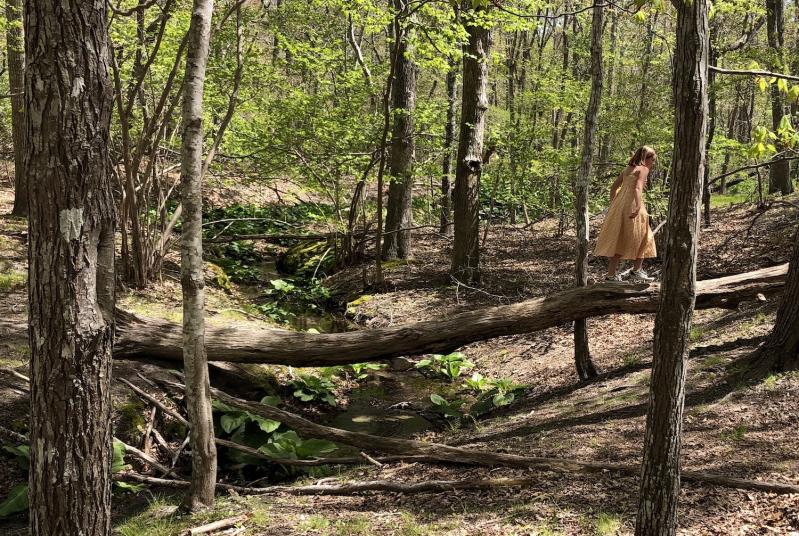 For many, a simple walk in the woods is fraught with worry over tick-borne illnesses like Lyme disease.
Carissa Katz
By Christopher Gangemi

There is no vaccine to help prevent Lyme disease, which is transmitted through the bite of an infected deer tick, but that may soon change.

In early August, the drug company Pfizer announced that it was seeking 6,000 people ages 5 and older to enroll in its phase 3 trial for a new Lyme vaccine. Participants will receive a three-dose series over a nine-month period and then a booster shot a year after their third shot. The study is expected to last two and a half years.

According to the federal Food and Drug Administration, clinical trials often have four phases. By the time a vaccine reaches a phase 3 trial, it has already proved substantially safe and effective in small groups of people. Phase 3 expands the number of people given the vaccine, its effectiveness is confirmed, and side effects are monitored.

Kit Longley, a spokesperson for Pfizer, said the company’s vaccine “targets the outer surface protein of Borrelia burgdorferi, the bacteria that causes Lyme disease.” Without the protein, the bacteria could not live inside the gut of the tick. Pfizer expects the vaccine will create antibodies that will recognize and attack the protein. If it is correct, the vaccinated person would not be infected with Lyme disease.

The science behind the Pfizer vaccine is like that used in the LYMErix vaccine, which was released by SmithKline Beecham in 1998. According to an article in the Oxford Academic Journal — “Vaccines against Lyme Disease: What Happened and What Lessons Can We Learn?” —LYMErix was pulled from the market in February 2002 due to safety concerns after several vaccine recipients complained that they “developed ‘autoimmune arthritis.’ “

Donna Butler, a resident of North Haven, took LYMErix shortly after moving there from the city in 1999. Her future husband, Michael Butler, recommended she take it after he recovered from his second Lyme infection.

“I didn’t think twice about it,” she said over the phone. A month after she took the vaccine, she said, her hips and lower joints hurt so much that she couldn’t walk very far without severe pain. A “Lyme literate” medical doctor in New York City, Dr. Ward Cunningham-Rundles, “put two and two together” and told her she was likely having a reaction to the vaccine.

Ms. Butler acknowledges that this is a controversial diagnosis. “There are doctors who think the diagnosis is a farce, and others who believe in it. But there are people that are crippled, physically, and cognitively because of that vaccine,” she said.

“I would not do a trial” of the new vaccine, she said.

Dr. Blake Kerr, an M.D. with Meeting House Lane Medical Practice’s Wainscott Walk-In Medical Care, has been practicing medicine on the East End for over 30 years. He remembers LYMErix and the class action lawsuits that followed before it was ultimately pulled from the market.

“We did consider it effective, but there was no follow-up because it was pulled. How were the antibody levels five years later? We just don’t know,” he said. Nonetheless, he’s happy a new Lyme vaccine might be on the way. “I’m glad they’re doing it. We have an endemic situation here.”

“I have a handful of patients who had the LYMErix vaccine,” said Alphonso Scotti, a physician assistant at Weill Cornell Medicine in Southampton. “I haven’t had any that complained of any known adverse effects.”

“There’s a real desperation about Lyme disease,” said Rebecca Young, a registered nurse with the Stony Brook Southampton Tick Resource Center. According to Suffolk County data from 2021, in East Hampton Town 62 percent of tested adult black-legged, or deer, ticks, and 30 percent of nymph black-legged ticks carry Lyme disease. That could help explain why there are at least two other methods in development to prevent Lyme.

One, created by Dr. Erol Fikrig, a Yale School of Medicine infectious disease physician, uses the same MRNA vaccine technology that has become familiar during the Covid era. His vaccine would make the tick bite quickly itchy and red, making it easily noticed. It’s also the first vaccine intended for humans that does not target a pathogen.

“Lyme disease isn’t the only issue,” said Dr. George Dempsey, the medical director of East Hampton Family Medicine. He was most interested in Dr. Fikrig’s MRNA vaccine. “The lone star tick is the main problem out here. I’m seeing more of the meat allergy caused by the lone star tick than I see Lyme disease.”

“The potential of catching the tick early, just as it’s biting or shortly after, holds real promise,” he said.

Last fall, Dr. Dempsey was honored by the Bay Area Lyme Disease Foundation for his work in building a local bio bank, or collection of blood samples from those experiencing symptoms of early-stage Lyme disease.

According to the C.D.C., for a tick to transmit Lyme disease, it “must be attached for 36 to 48 hours or more.” Tick saliva contains a numbing agent, which is why their bites often go undetected. Notice the tick quickly and the odds of it passing on a pathogen are reduced.

“If you look at the data, the vast majority of Lyme diagnoses come from people who don’t know they were bit,” said Mr. Scotti.

In fact, Dr. Fikrig’s vaccine could potentially reduce all tick-borne diseases, like babesiosis or ehrlichiosis, that require a long attachment period.

A third strategy involves monoclonal antibodies which, like the MRNA vaccine technology, became a familiar term during Covid. The Lyme PrEP shot, developed at MassBiologis of UMass Medical School, is in phase 1 clinical trials. It is not considered a vaccine since it doesn’t produce an antibody response. Instead, the shot is a prophylactic.

According to the UMass website, the shot “prevents infection by delivering a single, human anti-Lyme antibody, or blood protein, directly to a person rather than triggering their own immune system to make many antibodies as vaccines do. If a person’s blood contains antibodies against the bacteria, the antibodies can kill Borrelia in the tick’s gut before the bacteria have a chance to travel to the salivary glands, thereby preventing transmission to the human.”

Vaccines, or perhaps politicians talking about vaccines, have divided opinion these last few years. One thing that every East End resident can agree on, however, is that tick-borne diseases have a huge impact, not only on people’s health but on their ability to enjoy the outdoors. Perhaps vaccines will make a difference.