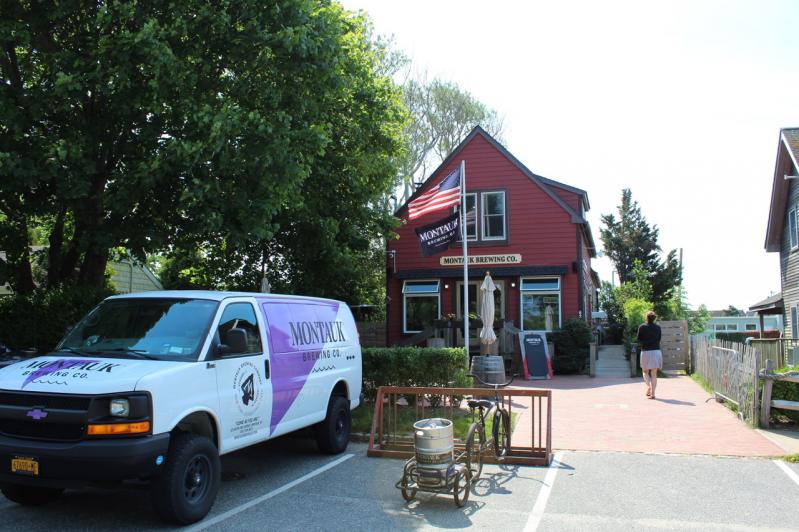 Vaughan Cutillo and Eric Moss, who launched the Montauk Brewing Company with a basement beer-brewing setup in 2012, sometimes joke that their business is a "10-year overnight success."

People increasingly took note of Montauk's growing popularity, characterized by its always-packed tap room, cool takes on brews involving ingredients like watermelon and pumpkin, and buzzy media coverage. The international cannabis and alcohol company Tilray was among those paying attention, and on Monday, Tilray announced that it has bought the Montauk Brewing Company for an undisclosed sum.

"We've been kind of punching above our weight class for a few years now," Mr. Cutillo said by phone on Monday night. "We met the Tilray team a few months ago and as things progressed, we got to like them. They're good people and they have a good vision for the future. We kind of fit in. . . . I think it's time that we have a really good, strong partner. We're excited."

Those concerned that Montauk's craft-brewing operation will be negatively impacted can be reassured that pretty much everything will stay the same, Mr. Cutillo said. All current employees will stay on, the tap room will remain a community hub, and they will continue to brew the beers that fans have come to love, he said. He described it as the opposite of contentious deals such as InBev's hostile takeover in 2008 of Anheuser-Busch, the maker of Budweiser.

Tilray has been great "because they want us to run the business. They don't want to shake things up," Mr. Cutillo said. "They obviously offer a lot of synergies in what they can offer in terms of distribution . . . but our team is staying on board. They want to keep everybody and grow the brand."

Tilray, a public company headquartered in Ontario and New York City, said in a press release that "Montauk Brewing has enormous potential to expand its customer base and grow throughout the U.S. as a true national brand." It already has more than 6,400 retail partnerships, from local taverns and small beverage distributors to behemoth businesses like Target, Trader Joe's, Whole Foods, and Costco.

Tilray reported $153.2 million in annual revenue in August, a decrease of 9 percent from August 2021 that was attributed to labor issues and the volatility of currency exchange, according to the Canadian trade publication MJBizDaily.

Citing another one of its successful labels, the Atlanta-based SweetWater Brewing Company, described as "the 10th largest craft brewer in the nation," Tilray Brands said it will use SweetWater's "existing nationwide infrastructure to accelerate Montauk Brewing's distribution network and revenue growth."

In the same release, Tilray said that it is eyeing the federal legalization of cannabis in the U.S. If that happens, Tilray "plans to take full advantage of its strategic infrastructure, operations, and consumer-loyal brands across beer, spirits, and snack-food categories to parlay into THC-based products and further expand its commercial opportunities."

THC, an abbreviation for tetrahydrocannabinol, is the psychoactive ingredient in marijuana, whose recreational use was legalized in 2021 in New York State. It's also legal, in recreational or medical forms, in 37 other states and Washington, D.C., but its federal status is far from certain. In April, Congress passed the Marijuana Opportunity Reinvestment and Expungement Act, which, among other aspects, removes it from the list of federally controlled substances — but it has yet to pass the Senate. With heated races in midterm elections across the country this week, control of the legislative branch of the U.S. government hangs in the balance.

But Mr. Cutillo declined to comment on future plans and products for the Montauk brand, saying only that it has plans to "innovate."

"I think this is a really good opportunity, in a tumultuous time, to really drive the brand," he said, "and spread that kind of come-as-you-are, chase-your-wave lifestyle more so than we've ever done."

Fans immediately took to social media to congratulate the Montauk Brewing Company. "You were the Montauk boys," one person wrote on Facebook, "but you just graduated to men."