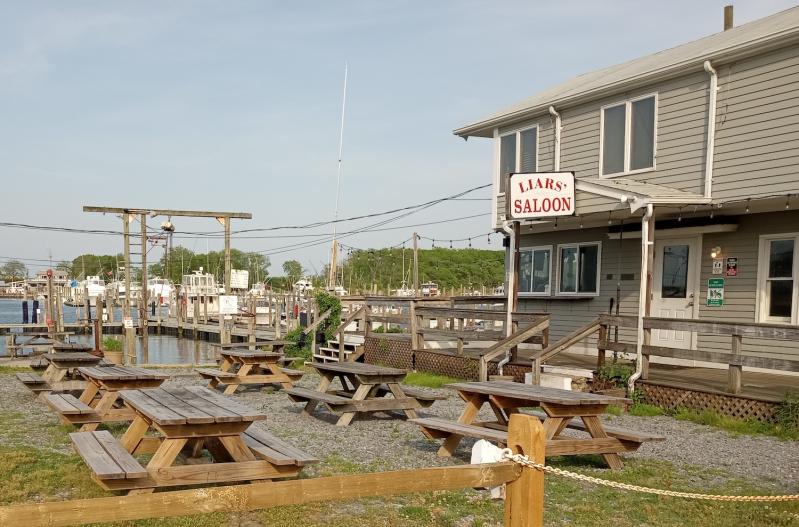 After months of anxious speculation about its future, Liars' Saloon in Montauk has been purchased by Sam Gershowitz of Star Island Yacht Club. The fate of the bar's legendary mudslides remains unclear.
Tom Gogola
By Tom Gogola

Sam Gershowitz, an UpIsland recycling magnate who owns the Star Island Yacht Club in Montauk, is the new owner of Liars' Saloon and the Offshore Sports Marina at 408 West Lake Drive in Montauk.

Alexander Gershowitz, his grandson, confirmed in a call Tuesday evening that the purchase had taken place "recently, within the last few weeks," but couldn't say what his grandfather had paid for the Lake Montauk property.

Speculation had been swirling for months over the fate of the beloved locals' dive bar, famous for its dollar drafts, delicious mudslides, epic karaoke nights, and a diverse clientele of fishermen, surfers, and vacationers of all stripes.

Liars' had been reported sold, perhaps for as much as $6 million, in online posts speculating about its fate through the spring. The bar closed abruptly late last year and a chain-link fence was run across the entrance.

That fence is now on the ground and it appeared on Monday that there was some cleanup activity already taking place at what amounts to sacred land for thirsty local workers and landlubbing city folk alike.

The younger Mr. Gershowitz, who is the general manager of the Star Island Yacht Club, said he could not provide any details about the fate of the small but mighty saloon or its 40-to-50 slip marina, where a gas pump has been stuck at an inflation-beating $3.69 a gallon since the end of last season.

Sam Gershowitz, who has a house in Southhampton, opened Gershow Recycling in Medford in 1964. He operates numerous other recycling facilities on Long Island and in Brooklyn, and, in 2020, earned a Lifetime Achievement Award from the Washington, D.C., Institute of Scrap Recycling Industries for his contributions to the industry.

It's anyone's guess at present whether he'll be recycling, reusing, or replacing those famous mudslide blenders located behind the Liars' bar.

The sale to Sam Gershowitz had of late become one of the best worst-kept secrets in town. Three well-placed sources in Montauk told Star reporters in recent days that Sam Gershowitz had, or would be, buying the legendary property, including one who said he believed it was a good deal for Montauk, "and far better than some hedge fund coming in and buying it."

The source added that he believed the purchase would free up dock space at Star Island for more big yachts -- and redeploy some of the charter boats now docked at Star Island to the marina at Liars'.

The younger Mr. Gershowitz said Star Island's solid reputation in town "speaks for itself and should speak well for what we're going to do with the place."