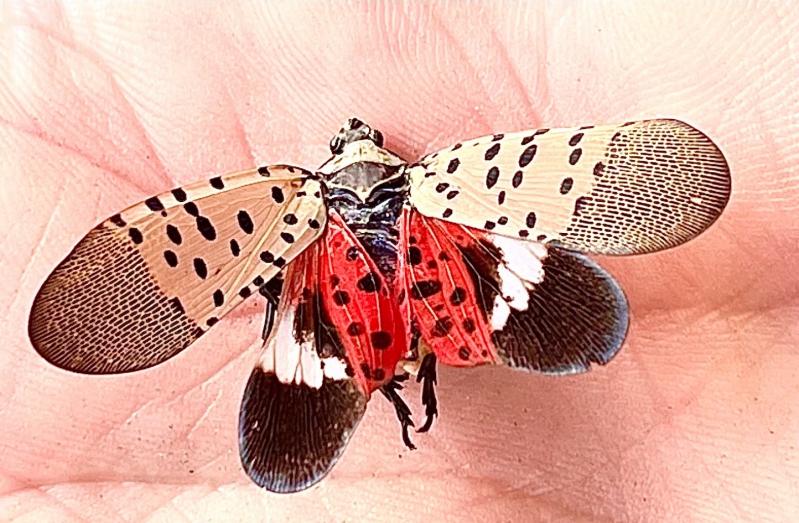 The spotted lanternfly is an eye-catching pest that loves the invasive ailanthus tree and, if left unchecked, can destroy acres of grapes.
Keith Douglas
By Christopher Gangemi

Imagine a world without wine. That’s the devastation that could be wrought by the spotted lanternfly, an invasive insect from Asia that’s reached Ronkonkoma and is headed east, posing a serious threat to vineyards.

“The excessive feeding and affinity it has for grapes, especially in early fall, can weaken and possibly even kill the vines,” wrote Dan Gilrein, an entomologist at the Cornell Cooperative Extension of Suffolk County. But he added that he doesn’t think commercial vineyards would allow that to happen.

New York State is number three in the United States in grape production, and the East End is home to many vineyards.

“Acres of vineyards were lost in Pennsylvania,” said Brian Eshenaur, an invasive species specialist for the Cornell’s New York State Integrated Pest Management program. “They stopped growing and planting new grapes there for a few years after” the spotted lanternfly first showed up.

“We know what to do to control them,” said Mr. Eshenaur. After wine grapes are harvested, he said it is es sential for vintners to continue to monitor their vines. “We don’t know of any vineyards that have them on Long Island,” he said, “but we still have the month of October.”

The spotted lanternfly, which really isn’t a fly, but a “planthopper,” hitched a ride to Pennsylvania in 2014 on rocks from South Korea and has since spread throughout the Mid-Atlantic and the Northeast.

“It’s hard to anticipate how quickly it will move,” said Mr. Eshenaur, but he expects it on the East End “in a couple of years.”

If it weren’t so destructive, it might be interesting.

Its dull beige wings are covered in black spots, with a finer, lacier pattern on the ends. Its hindwings are divided into two portions, an upper wing that is black with a white stripe and a lower wing that is red with black spots. The spotted lanternfly is slightly larger than a lightning bug.

Alice Wise is a viticulture researcher with the Cornell Cooperative Extension. She conducts field research and helps educate the wine industry. She is in close contact with East End wineries to help them get out ahead of the insect.

“Everyone is worried about it,” texted Christopher Tracy, winemaker at Channing Daughters Winery in Bridgehampton. “Kill them immediately if you see them, please, wherever you are!”

Apart from wineries, the spotted lanternfly puts many of our native trees at risk. Mr. Eshenaur said they will not feed on conifers, but black walnut, silver maple, willow, and oak trees can all be damaged.

Our trees are already struggling. Beech leaf disease, caused by an invasive nematode, has spread to the East End in the last couple of years. The southern pine beetle has killed many thousands of pitch pines in East Hampton, Wainscott, and along the Napeague stretch.

Andrew Gaites, principal environmental analyst for the Town of East Hampton, said he has been watching the progress of the lanternfly for years.

“None have been found here as far as our department knows,” he said. However, the department did receive an unconfirmed report of a sighting in East Hampton this summer.

Both he and Andrew Drake, a town environmental analyst, have been trained on identifying the spotted lanternfly and routinely monitor a swath of town land in search of the pest. His department was first to find the southern pine beetle here, in 2017.

“If we can find an infestation in its earliest stages, perhaps we’d have a chance to eradicate it,” he wrote.

“I don’t think everyone will have the same experiences when they do arrive in the area,” wrote Mr. Gilrein. “Those with more of the favored late-summer host plants will probably see higher numbers than others.”

Unfortunately, the spotted lanterfly’s favorite host plant is also invasive and native to Asia: the ailanthus tree, or tree of heaven, is sprouting all over the East End.

The relationship between tree and insect is tight. So tight, that for years scientists “thought the ailanthus might be required for the [spotted lanternfly] to be successful and reproduce. It wants to go to it at some point in its life cycle,” said Mr. Eshenaur. In Asia, their ranges overlap. Without the tree, Mr. Eshenaur said, they lay seven times fewer eggs. They also lay them later in the season, giving them a shorter life before the first freeze.

“Half the battle is getting people to be aware of invasive plants and being able to identify them,” said Catherine Spolarich, an invasive plant biologist who grew up in Sag Harbor. As a Pierson student, she used to walk past ailanthus every day on her way to field hockey practice. “I didn’t know what I was looking at.”

“In order to mitigate a problem, we have to know it is there and be able to assess the scope of it,” she said.

In Sag Harbor, you can find stands of ailanthus all along the popular sunset spot Long Beach. In East Hampton, Mr. Gaites said there’s a stand at the intersection of Copeces Lane and Three Mile Harbor Road. There’s another small stand at the end of Gerard Drive in Springs.

For most, the arrival of the spotted lanternfly will be a nonevent. It doesn’t bite. It doesn’t carry disease, and it won’t kill your dog. However, Ms. Spolarich hopes it might be a catalyst for change.

“It takes a concerted community effort to mitigate these problems, and anyone can be valuable eyes to help conserve our part of the world,” she said.

One way to do this is to learn to identify ailanthus and work with your landscaper to remove ailanthus, and other invasive plants, on your property. If people plant native trees and plants, invasive insects will have a more difficult time taking over.

And if you do see a spotted lanternfly in Suffolk County, Mr. Eshenaur asks you to report the sighting at reportslf.com and include a photo and location details.