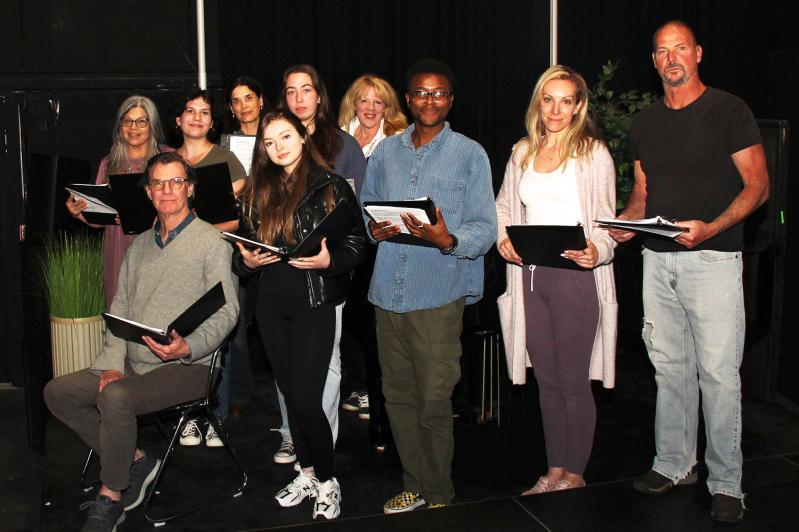 "Right Before I Go" will include a talkback with the director and cast after each performance at LTV.
Durell Godfrey
By Judy D’Mello

On the National Action Alliance for Suicide Prevention's website, is this message: "To prevent suicide, we need to be able to talk about it openly -- without fear or shame. But how we talk about suicide matters. These conversations can be helpful or harmful."

One such discussion will take place in the form of a play titled, "Right Before I Go," to be staged at LTV studios in Wainscott beginning Saturday.

As the show's poster states, it is, quite simply, "A play about suicide." Conceived by Stan Zimmerman, a successful Hollywood writer of comedies such as "The Gilmore Girls" and "The Golden Girls," it was a tribute to his friend Kevin, who committed suicide in 2012. Kevin left a note, in which he singled out a few friends, including Mr. Zimmerman.

Reeling and devastated, the playwright found himself researching suicide rates in an effort to make sense of his friend's death. The statistics today are bleak: Globally 800,000 people die from suicide every year -- twice the number as deaths from homicide. Suicide is also one of the leading causes of death in young people. In the United States, there is one suicide death every 11.5 minutes.

The playwright knew that he simply had to do something in an effort to spread awareness. Initially titled, "Suicide Notes: In Their Own Words," his play won a Hollywood Fringe Festival award in 2015. Then, after renaming it, "Right Before I Go" was performed with a star-studded cast at New York City's Town Hall in December 2017, as a benefit for the American Foundation for Suicide Prevention.

For Mr. Zimmerman, the goal for the play is simple. "I hope to break the silence and create discussion about the topic of suicide," he wrote in an email to The Star. "There is still so much shame. If we don't talk about it, that will make more people go inward and unfortunately write more of these notes."

It is, undoubtedly, a good time to openly discuss serious mental health issues such as suicide, as people of all ages suffer a ratcheting up of acute distress caused by the turmoil of a pandemic. Risk factors for suicide include job loss, financial instability, interpersonal violence, bullying, and domestic abuse. Young people are said to have been hit the hardest, and mental health experts are deeply concerned about the long term effects on their well-being.

In 2021, the U.S. Surgeon General issued a public advisory, warning of a "mental health crisis." In it, he wrote: "The pandemic era's unfathomable number of deaths, pervasive sense of fear, economic instability, and forced physical distancing from loved ones, friends, and communities have exacerbated the unprecedented stresses young people already faced. It would be a tragedy if we beat back one public health crisis only to allow another to grow in its place."

On Tuesday, The New York Times ran an article that stated, "the major health risks facing U.S. adolescents have shifted drastically: Teen pregnancy and alcohol, cigarette, and drug use have fallen while anxiety, depression, suicide and self-harm have soared."

But suicide still remains a taboo subject, which makes it a vital conversation for young people to have.

Precisely, said Mr. Zimmerman. "This play is meant for young adults and older. I have found that younger people are less fearful talking about this subject than their parents. They have really responded to this theater piece, and especially need it after being so isolated with Covid."

The episodic play flows in the vein of "The Vagina Monologues," with actors reading excerpts from suicide notes, as well as the playwright's autobiographical thoughts, findings, and analyses by mental health experts about why people decide to take their own lives and choose to leave behind a note. It manages to balance a potent and poignant subject matter with a few light touches of humor. Mr. Zimmerman is a comedy writer, after all.

For Ms. diLorenzo, the director of the East Hampton production, staging "Right Before I Go" fulfills her desire to produce one play a year driven by a social cause. In 2018, she directed "The Vagina Monologues," with a portion of the proceeds benefiting the Retreat, the East Hampton domestic violence agency. In 2019, she staged "Love, Loss, and What I Wore," a play written by Nora and Delia Ephron, and partnered with the Coalition for Women's Cancers. This year's beneficiary will be the American Foundation for Suicide Prevention.

"It's a win-win," she said over a recent phone call. "For the play, for the venue, for the not-for-profit, and then we professional artists living out here on the East End, we get to work."

For anyone who might be put off by the subject matter, Ms. diLorenzo offered this: "I don't know anyone who hasn't felt isolated, or sad, or depressed, or anxious, or rejected. So, it's about opening up the conversation. It's about knowing that you're not alone and that there's somebody who can help or wants to help."

A talkback session with the cast and the director will be offered after each performance, for those interested in discussing the subject further.