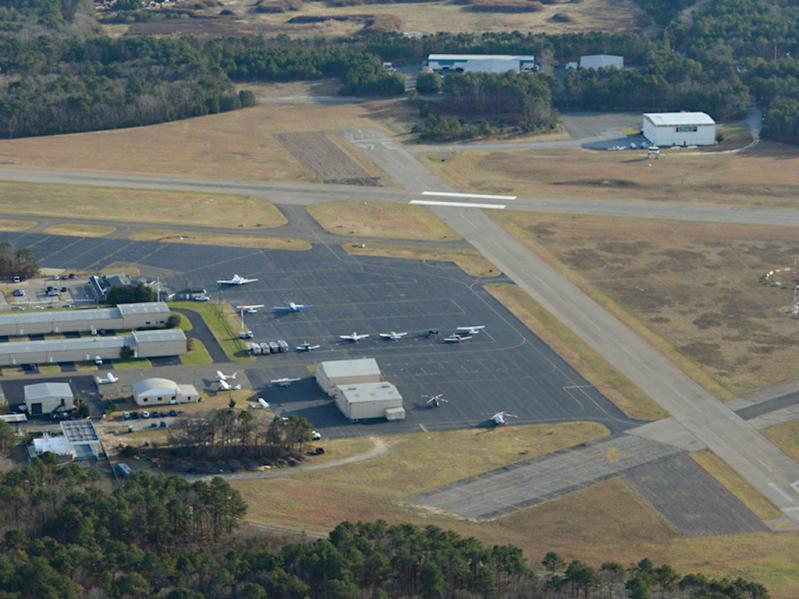 Runway 34 and a portion of Industrial Road near East Hampton Airport, top, will be eligible for cleanup assistance from New York State to remove potentially harmful chemicals from the soil. An area near the airport terminal, bottom left, was identified as contaminated as well.
Doug Kuntz
By Christopher Walsh

The East Hampton Town Board announced on Wednesday that the inclusion of the 47 acres on the Superfund registry was based on detections of perfluorinated chemicals, known as PFAS, in a recent investigation that included soil and water tests. The sites on the list are subject to a process of further investigation and cleanup.

According to a statement issued by the town, a notification the town received late last week followed the state's November release of a site report that recommended more investigation based on test results that found evidence of the perfluorinated chemicals at the airport.

The 47 acres on the registry are at a fire training and storage site, along Industrial Road, near the airport terminal and a fuel depot, the end of Runway 34, and more land west of Daniel's Hole Road.

Levels of perfluorinated chemicals at East Hampton Airport have been detected at up to 290 parts per trillion, more than four times a federal advisory for drinking water.

Additional testing and investigation will be undertaken in cooperation with the conservation department.

Upon notice of initial findings of PFAS contamination in the fall of 2017, the town urged Wainscott residents to have their wells tested -- and provided free bottled water to anyone within the area of concern.

Last year, the Suffolk County Water Authority extended public water mains throughout the hamlet and offered $3,000 grants to those whose wells were found to contain PFAS. The grants were to help install home water treatment systems before public water became available. Through a bond issue, the town also offered those connecting to the new water mains the option of spreading out the private connection line costs by repaying them over time as an addition to property tax bills.

Initial evidence reviewed by hydrogeologists for the town had suggested that the widespread contamination could be tied to residential use of the chemicals, which are a component of numerous household products.

The town has retained the Rigano law firm, based in Melville, as environmental counsel in the matter, as well as hydrogeologists. On behalf of the town, Rigano has sued the manufacturers of the PFAS chemicals, manufacturers of firefighting foam, and the users of the foam, seeking payment for damages.