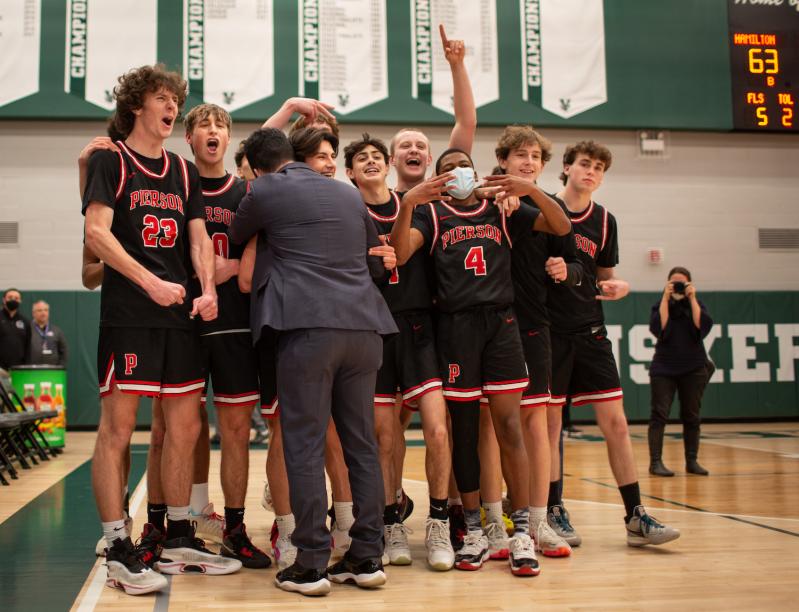 The Whalers are headed for Glens Falls, where on Friday they will face Newfield High School of Tompkins County in a Class C semifinal.
Lindsay Morris
By Jack Graves

In the final seconds of Sunday's state Class C regional boys basketball final at Yorktown High School, after Pierson's Dom Mancino and Wilson Bennett missed layups, Leo Butler rebounded the ball, and, just before the final buzzer sounded, banked in a fallaway shot that was to defeat Alexander Hamilton, Westchester County's Class C champ, 65-63. It sent the Sag Harbor school to the state Final Four tournament at Glens Falls this weekend for the first time since 1978, a year that Pierson, then coached by Bob Vishno, won the state Class C championship, defeating — guess who — Alexander Hamilton.

For his heroics, Butler, a senior guard who scores infrequently, was lifted onto his joyous teammates' shoulders. The win was made all the more exciting by the fact that the Whalers had trailed the Red Raiders for more than three quarters, until a turnaround basket by Wilson Bennett, who was to finish with a game-high 34 points, put Pierson up 48-47 with 5 minutes and 50 seconds to play.

It was tooth-and-nail after that. A bold drive to the hoop by Keanu King, who had come off the bench, treated the Whalers to a 57-52 lead with three and a half minutes to go, but Hamilton came right back to tie it at 63-63 on a 3-pointer from the right corner by Chris Ward, one of its guards, with 34.4 seconds remaining.

That bomb prompted Pierson's young coach, Will Fujita, to call timeout to discuss the inbounds play. When the action resumed, Bennett got the ball in to Cecil Munshin, who passed it to Butler, who passed it to Bennett. Bennett put up a shot, but it was blocked. The ball rolled out of bounds, which enabled the Whalers, with 21.7 seconds left, to inbound it again -- the third time, as related above, proving to be the charm.

"What an incredible ending," said the NFHS Network announcer. "Leo Butler, after two misses, sends it home and sends his team to the Final Four. . . . What an ending. Leo Butler, the hero, is on his teammates' shoulders. . . ."

Hamilton's Christian Davis, who drained three 3-pointers in the first quarter, went into the halftime break with 17 points, by which time Bennett, who was just getting started, had 11.

"It looks like this senior doesn't want to go home," the announcer said as Wilson, fed largely by Charlie Culver and Munshin, poured in baskets in the game's second half — seven from the field and two from the free-throw line in the all-important fourth frame.

"This team is proving that through a consistent and grateful mind-set they can accomplish the goals that they have set for themselves," Fujita said in an email Monday. "The underclassmen, including Keanu and Dom, have shown that buying into what we do as a program can yield some great results."

As for Butler, he said, "Leo is one of the hardest-working players I have ever coached. He will do anything to help the team win, and doesn't care about any of the stats that show up in the box score."

Fujita added that he was "very proud of the resilience that the team showed throughout the game. Every huddle was locked in, every player understood his role and valued the opportunity that we had in front of us. . . . I'm just so proud of these guys."

Sunday's regional final played out in somewhat the same way that the regional semifinal with Carle Place had, with the opponent starting out strong and with the Whalers surging in the fourth quarter. Pierson won that game 55-51, with Bennett again leading all scorers, with 25 points.

The team is to leave for Glens Falls, where on Friday at the Cool Insuring Arena the Whalers are to face Newfield High School of Tompkins County in a Class C semifinal at 1 p.m. The final is to be played Saturday at 7 p.m.

Back to Vishno, who's in his 90s now: "We lost [in the regional final] to Alexander Hamilton in 1979, at Nassau County Community College. Peter Schaefer made what we all thought was the winning basket, but the official waved it off and called Peter for traveling. We lost by 1 point. It was the worst call ever — I've never forgotten it."

Mashashimuet Park's History and Future
A Conference for Young People to Create Solutions
Get Outside, Get Moving
END_OF_DOCUMENT_TOKEN_TO_BE_REPLACED