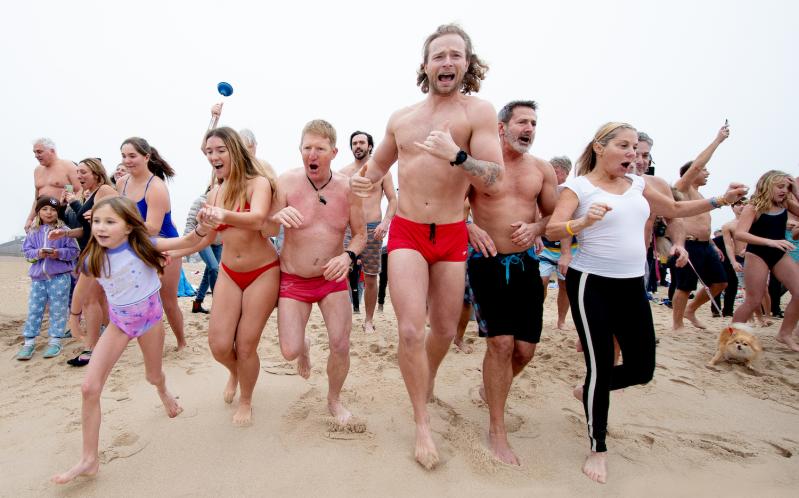 The first day of the new year was drizzly and drab, and, to some, depressing, though you wouldn’t have known it had you been at East Hampton Village’s Main Beach or at the Beach Lane road end in Wainscott for the New Year’s Day plunges that afternoon.

The traffic headed toward the East Hampton Village plunge was so thick at around 1 p.m. that the police cut off the river of cars into which several tributaries fed, at Lily Pond Lane. There wasn’t quite the same problem an hour-and-a-half later in Wainscott, though there was a significant crowd there too.

Both plunges — East Hampton’s attracted an estimated 300 plungers and Wainscott’s 150, with perhaps twice as many spectators at both sites — raised money for the food pantries here.

At Main Beach, a plunge overseen by at least a dozen members of the East Hampton Village Ocean Rescue Squad, a sign gave the water temperature as 48 degrees and the air temperature as 52. “It was cold,” said Linda Muse, a double-dipper, who went to the Wainscott one as well. “Though the surf looks a little less rough here,” she added.

Aside from the buoyant spirits evident at both New Year’s baptismal rites, the good news was that the weather was mild. “We were practically blown away by the wind two years ago,” said a volunteer with the Sag Harbor Food Pantry, the beneficiary of Colin Mather’s plunge in Wainscott.

It was clear through the large turnouts that people here were unwilling to be cowed by the two-year Covid pandemic and its most recent Omicron-variant surge. A hearty, high-spirited mood prevailed among those who went into the ocean and among those who cheered them on.

“We’re not just one-sport athletes, Jack,” Anthony Providenti said as this writer strolled by after the Main Beach plunge. Providenti, who in normal years oversees an August hoops tournament at Amagansett’s Sportime Arena as a fund-raiser for Down syndrome research, was in the company of a number of fellow pickup basketball players.

Chowder, chicken soup, chili, hot chocolate, and hot dogs were to be had at the Main Beach plunge, thanks to Dreesen’s Catering, Estia’s Little Kitchen, the Hurricanes youth swim team, M and R Deli, Bostwick’s Catering and Market, Wainscott Seafood, and the East Hampton Lions Club.

Plungers and non-plungers too were welcome to chowder, cake, cookies, and hot chocolate after the Wainscott rite at Mather’s Seafood Shop on Route 27.

Mather, the first to plunge here, in 1999, touts cold water as a cure-all. “Ice reduces inflammation, the swelling and the aches and pains,” he said recently. “It’s the cure for everything . . . like an electric shock treatment.”

“I’m not a religious person, but I feel that these New Year’s plunges wash off the old and welcome the new, and I know a lot of other people feel this way too.”